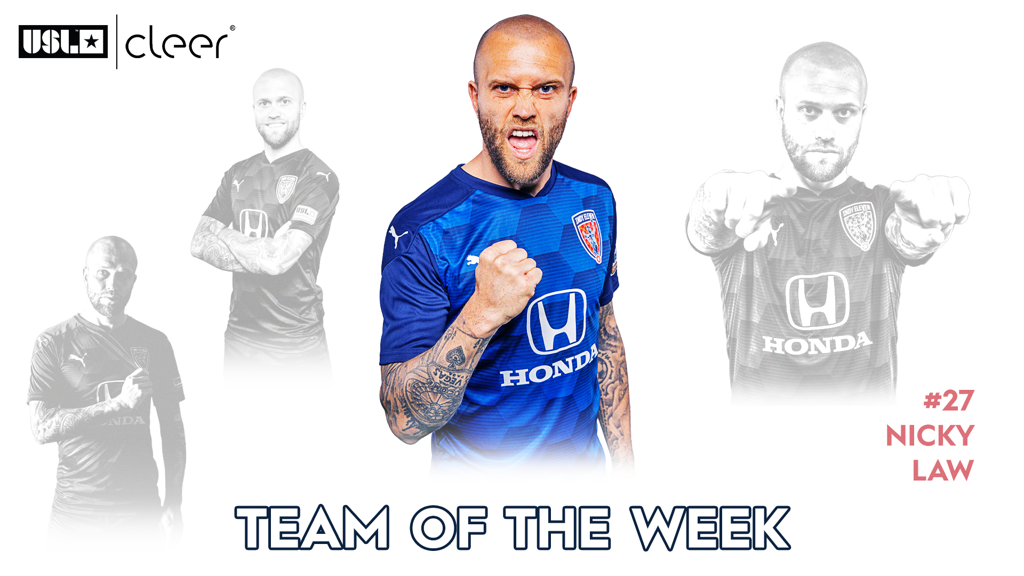 INDIANAPOLIS – Veteran midfielder Nicky Law is the fourth member of Indiana’s Team to be named to the USL Championship Team of the Week presented by Cleer Audio this season, earning the honor for his impressive display in Indy Eleven’s 2-1 home win against OKC Energy FC last Saturday.

The Plymouth, England native earned his placement on the TOTW after a masterful offensive display that helped snap Indy’s six-game home winless streak at IUPUI Michael A. Carroll Stadium. Law, 33, netted his second goal of the season in the 26th minute after slipping behind Energy FC’s backline to accept a pass from forward Manuel Arteaga, taking a touch before chipping the ball over goalkeeper C.J. Cochran to open the evening’s scoring. After a first-half concession that leveled the score at 1-1, Law reversed his role to assist for the game-winner in the 53rd minute, lobbing a back-post cross that Arteaga nodded on a near-angle over the goal line.

Since his arrival stateside form English Football League Two’s Exeter City FC in January, Law has become one of the team’s most consistent distributors, leading the Boys in Blue in passes (851) and passing accuracy (88.1%). Law’s connectivity was on full display last Saturday, having completed 36 of his 40 passes, three of which put his teammates in a goal scoring position.

Law is the first member of the Boys in Blue to be selected to the league’s Best XI since Week 10, when defender Neveal Hackshaw earned his first nod of the year for a goal and assist in Indy’s 3-3 stunner at Louisville City FC. Forwards Jordan Hamilton and Gordon Wild were the first two members of Indiana’s Team to make TOTW appearances this season with back-to-back placements in Weeks 5 and 6, while goalkeeper Bobby Edwards and defender A.J. Cochran earned “honorable mentions” in Week 9 and Week 2, respectively. The Championship’s Player of the Week is selected by the USL National Media Panel, which is made up of representatives from each media market in the Championship.

Next up, Indiana’s Team will take its second Wednesday-Sunday road trip of August beginning with a midweek match against Loudoun United FC tomorrow evening at Segra Field in suburban Washington D.C. (7:00 p.m. kickoff, live on ESPN+). From there, the Boys in Blue head west for its second meeting of the season at Children’s Mercy Park against Sporting KC II (5:00 p.m. kickoff, live on ESPN+).

Indy Eleven comes back home again on August 28, with the first of four straight Saturday nights at Carroll Stadium against Real Monarchs SLC. First kick on Bob Ross Night at “The Mike” is set for 7:00 p.m., and the limited number of tickets remaining can be secured by visiting  indyeleven.com/tickets or by calling 371-685-1100 during regular business hours. For full details surrounding the evening’s event, visit indyeleven.com/promotions.

GK – Paul Lewis, Charleston Battery: Making only his second professional start, Paul Lewis recorded a two-save shutout against Loudoun United FC, including a key first-half penalty kick save to keep the game scoreless. The Battery were able to secure three points with a late winner in their pursuit of a playoff place.

D – Nick Hinds, Austin Bold FC: Nick Hinds helped Austin Bold FC’s back line contain Miami FC in a 0-0 draw on Saturday night. He won 6 of 7 duels and made six recoveries while completing 37 of 44 passes and recording a pair of shots as he joined the attack.

D – Aaron Guillen, Tampa Bay Rowdies: Aaron Guillen won 4 of 4 tackles and 7 of 7 duels while making four interceptions and completing 48 of 55 passes as the Rowdies held Hartford Athletic to only two shots in a 1-0 win at Al Lang Stadium on Friday night.

M – Speedy Williams, Miami FC: The Jamaican international helped his side to four points on the road over the week, including scoring two goals in Miami’s comeback 3-2 victory against Pittsburgh Riverhounds SC on Wednesday night. He completed 111 of 130 passes, won 3 of 3 tackles and made 15 recoveries across two games.

M – Robbie Mertz, Atlanta United 2: Robbie Mertz had one goal and two assists across a pair of games as Atlanta took four points from its week of action, and additionally completed 62 of 73 passes overall while winning 9 of 15 duels.

F – Phillip Goodrum, Atlanta United 2: Phillip Goodrum came on as a halftime substitute on Saturday against Sporting Kansas City II and made an immediate impact, notching a goal and assist inside 10 minutes before adding his second goal of the game to wrap up a 4-1 victory for the side.