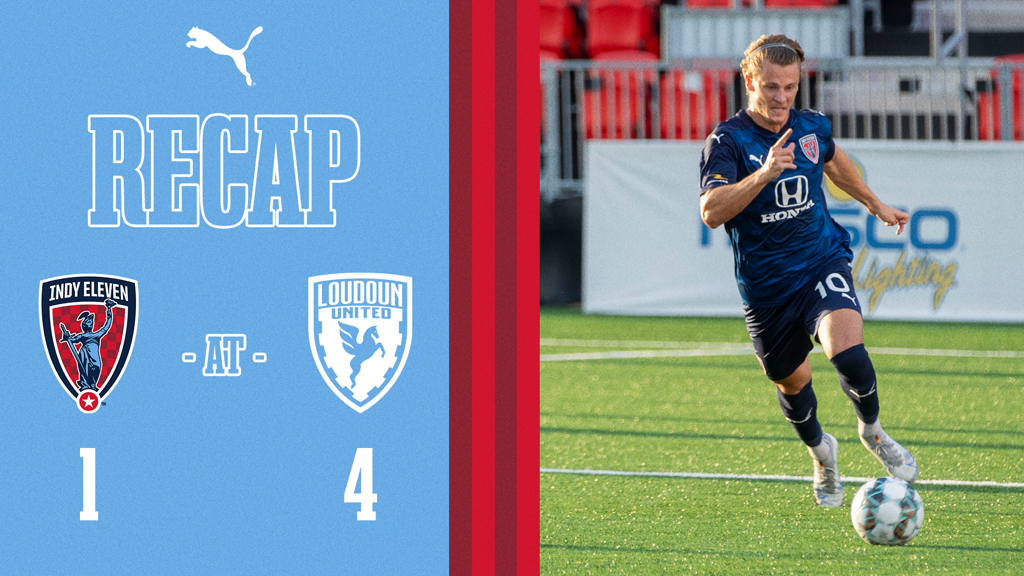 LEESBURG, Virginia – A late finish by defender Karl Ouimette could only salvage a scratching of the scoreboard for Indy Eleven, which fell on the road 4-1 in an inter-division affair at Loudoun United FC Wednesday evening.

The result kept Indiana’s Team in fourth-place in the crowded middle of the Central Division standings, still even with FC Tulsa and OKC Energy FC on 22 points and three points behind third-place Atlanta United 2.

Indy Eleven’s high pressure dominated the first quarter hour at Segra Field, the visitors carrying the bulk of the possession and doing much of it in the attacking third. It was Eleven forward Manuel Arteaga getting the earliest test on goal eight minutes in, his low shot saved at the near post of Loudoun netminder Jermaine Fordah.

The pendulum swung in Loudoun’s favor across the next 15 minutes, but Eleven goalkeeper Jordan Farr saved a soft header from eight yards out and saw another sent over the bar, those chances marking the most United FC could muster in the middle of the half. In the 35th minute Farr stepped up again, getting low and extending fully to steer United FC midfielder Theodore Ku-Dipietro’s 25-yard free kick around the base of the right post.

Loudoun’s persistence on the ball and penchant to earn set pieces finally paid off in the last five minutes of the half, courtesy of a brace by forward Samson Sergi. In the 43rd minute, Robert Dambrot’s low ball through the heart of the area found Sergi, who lingered off the back shoulder of the Indy backline and tapped in from seven yards out to put Loudoun up 1-0. A minute into stoppage time Sergi was in the right place again, watching from the right post as Farr fought the crossbar while rising to touch over a corner kick cleared back towards his goal. The ball glanced sideways and skidded off the top of the woodwork before it fell directly to Sergi, who volleyed home practically on the goalline to give Loudoun a shock 2-0 lead heading into halftime.

Indy Eleven showed some attacking initiative to open the second half, Ouimette’s header off a corner kick in the 51st minute that glanced just wide the most promising of the few chances earned. On the other end Farr made a pair of saves in the 58th and 61st minutes to keep the visitors close, followed by Loudoun substitute forward Darluis Laz flashing his 20-yard blast just wide of the left post.

However, Paz would get on the scoresheet in the 73rd minute, his rebound of Indy defender A.J. Cochran’s goalline clearance of Smith’s chip from the endline putting United FC up 3-0. Three minutes later it was Paz playing provider, the Venezuelan getting to the endline before driving the ball to the six where it was met by Ku-DiPietro’s sliding effort that moved the scoreboard once more for the home side.

Eleven striker Gordon Wild nearly got one against his former team in the 78th minute, only to see his free kick from 28 yards parried away strongly by Fordah. Wild’s ensuing service from the corner found Ouimette eight yards from goal, and the Canadian vice-captain would indeed get the goal he just missed earlier in the half, a nice glancing header to the back post salvaging a goal for Indiana’s Team on an otherwise frustrating evening.

Next up, the Boys in Blue head west this Sunday, Aug. 22, for its second meeting of the season at Sporting KC II. Kickoff from Children’s Mercy Park on the Kansas side of the border is set for 5:00 p.m. ET for a contest that can be streamed live on ESPN+.

Indy Eleven comes back home again next Saturday, August 28, with the first of four straight Saturday nights at Carroll Stadium against Real Monarchs SLC. First kick on Bob Ross Night at “The Mike” is set for 7:00 p.m., and the limited number of tickets remaining can be secured by visiting  indyeleven.com/tickets or by calling 371-685-1100 during regular business hours. For full details surrounding the evening’s event, visit indyeleven.com/promotions.