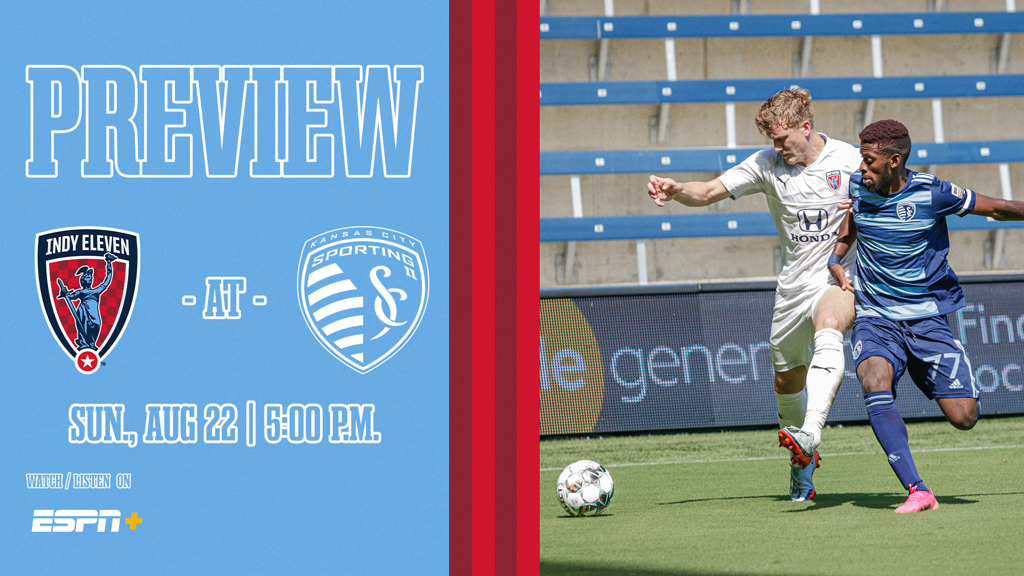 After a brief midweek diversion from Central Division play, Indy Eleven gets back to divisional action Sunday evening against Sporting KC II at Children’s Mercy Park, the site of Eleven Interim Head Coach Max Rogers’ win on his debut as the sideline boss back on June 20.

Rogers has plenty to sort out with his squad leading up to Sunday’s tilt, coming off a disappointing 1-4 defeat at Loudoun United on Wednesday evening. In that match, the same starting XI that was very much on the same page throughout Indy’s 2-1 win over OKC Energy FC last weekend got another run out, but the continuity Rogers’ was looking for disappeared after the opening 15 minutes, and a pair of concessions at the close of the first half put the Boys in Blue in a hole they couldn’t dig out from.

Heading into its match at Atlanta United 2 two weekends ago, Indy Eleven boasted a 2.00 points per road game haul that was tied for tops in the USL Championship. However, with two away outings to forget since then, Rogers & Co. must muster the edge that made them one of the league’s hardest “outs” on the road. The elixir for that to happen could include two parts previous success and one part familiar ground, with Indy collecting wins over SKC II in both prior 2021 meetings – including at Children’s Mercy Park just four days after the turmoil that resulted in Rogers taking over the reins. With Indy Eleven’s injury report also empty for the first time all season, don’t be surprised to see the starting lineup shaken up a bit to insert some fresh legs – and some fresh spirit – onto the field.

Heading into that 2-1 triumph for the Eleven in late June, Sporting KC II had been showing signs of competing in a stacked Central by garnering at least a point from five of its first nine matches. However, it’s been a summer of struggle ever since, with SKC II going 1W-9L-1D since the June 20 meeting; that includes a current five-game overall losing streak and a five-game losing streak at Children Mercy Park, during which they’ve been outscored by visitors 14-6.

After allowing four goals in each of its last three contests, SKC might find some small solace in the fact that those matches came against the Central’s top three teams. With further mining, another “glass half full” approach can be presented by the fact that Sporting has indeed hit the back of the net in each of the five losses in its current streak, three of which ended on 2-1 scorelines.

With six different SKC II players scoring as many goals in those last five games, that leaves Indy’s lineup needing to ensure its focus on individuals is not outsized. However, that may only help an Eleven side that needs to collectively dial it up a notch in an attempt to once again overcome a touch of adversity during the long Championship campaign.

Indy Eleven heads to the Kansas side of the Kansas City Metro this weekend looking to stay perfect against Sporting KC II on the season and all-time on the road. Indy collected a 3-1 win against then Swope Park Rangers in April 2019 to start the two sides’ all-time series on a winning note, and, after contesting all four games in their 2020 series at Lucas Oil Stadium, renewed acquaintances in Kansas earlier this season with a 2-1 triumph on June 20 that marked the debut of Interim Head Coach Max Rogers.

In all, Indy Eleven has dominated the series with SKC II, collecting a 6W-2L-0D mark and 14-8 advantage in goals scored. After Sunday’s meeting, the squads will end their season series on Sept. 11 at Carroll Stadium, where Indy began this year’s meetings with a 2-0 win on May 22.

With roster rotation entering the equation for a third game in nine days’ time, it’s hard to pinpoint anyone who might be written onto Rogers’ team sheet with a sharpie. However, look for Moon to get more involved after getting on for the final half hour of Wednesday’s match at Loudoun United FC. The right-sided Swiss Army knife brought his usual aggressiveness on the dribble off the bench the other night, and as the third-year pro continues to progress from a minor injury suffered a couple of weeks back at Atlanta, if he is anywhere near full health you can expect to see Moon give it a go from the opening whistle.

One of the most versatile players in the entirety of the USL Championship, Moon has proven himself to be a more than capable defender, a speedy threat on the dribble, a dangerous distributor (two assists and 11 chances created) and able finisher (three goals on only eight shots). Moon also has shown a tangible jump in confidence in his now second season with the Boys in Blue – and given the roller coaster performances in recent weeks, that might prove the most valuable asset he could pack in his bag for Sunday’s road trip.

Don’t let Sporting’s current record fool you. Despite being on a five-game losing streak, six different goal scorers have netted for the Kansas City side in the team’s last six outings – and none look more in form than Mushagalusa. The 21-year-old is having a breakout year in his second season with Sporting KC II as he currently leads the scoring charge for his teammates with six tallies in his 20 appearances. The Congolese striker may not be a top contender for the 2021 Golden Boot, but his 42 shots – just six behind Manuel Arteaga’s league-leading count – show he’s hungry for more as SKC II continues into the second stretch of the season. Mushagalusa also has a knack for playmaking having created 17 chances on goal so far this year, two of which have ended up in the back of the net.

Indy’s backline will be tasked with limiting Mushagalusa’s time in its defending third, as all six of the forward’s goals, including his tally against the Boys in Blue on June 20, have come from inside the opposition’s 18-yard box.