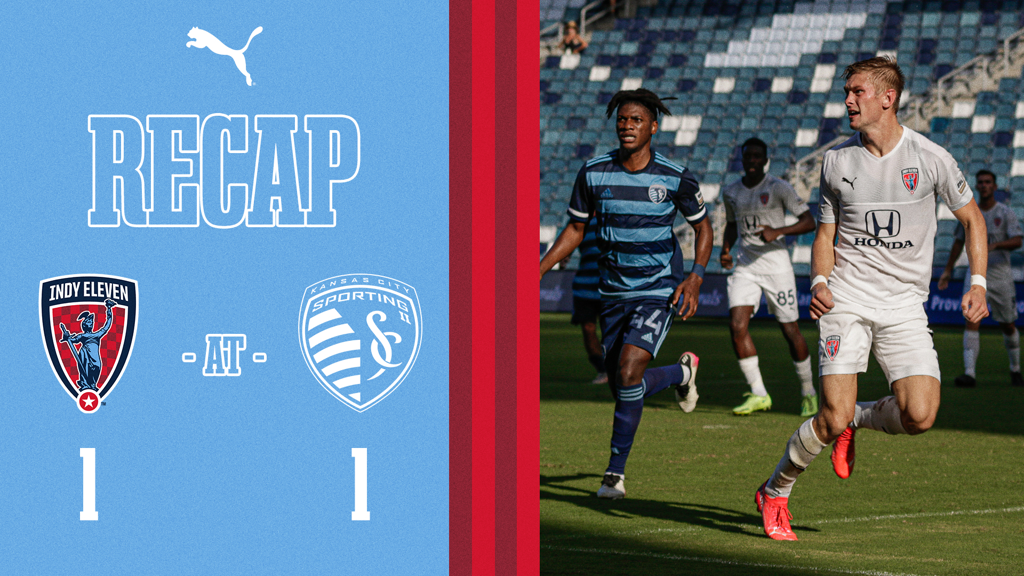 KANSAS CITY, Kansas – Indy Eleven came back to garner a share of the spoils at Sporting Kansas City II, but Indiana’s Team felt like it could have gained more from its 1-1 draw Sunday evening at Children’s Mercy Park. Forward Jordan Hamilton reclaimed sole possession of the Eleven’s scoring lead with his fifth goal of the season early in the second half, countering a late first half tally by familiar SKC nemesis Wilson Harris.

The action heated up eight minutes in, when Hamilton stepped in front of his mark to first-time defender Patrick Seagrist’s deep cross, but a sliced effort was saved by SKC ‘keeper John Pulskamp on his line. Nine minutes later it was that same Indy duo hooking up again with Seagrist chipping a clipped cross to the six, where Hamilton had little time to think before pulling his header wide.

Nearly a half hour expired before Sporting KC II registered their first shot, and it took until the 38th minute for the home side to pose a serious threat through Harris’ wide effort from 12 yards out. Ninety seconds later Harris would indeed move the scoreboard, sliding into the six and redirecting Kayden Pierre’s inch-perfect cross from the right flank. Eleven midfielder Jeremiah Gutjahr nearly evened up just two minutes later, his flush half-volley from 20 yards taking a deflection before dipping just over the crossbar.

It was Sporting presenting the first bit of danger after the break via forward Enoch Mushagalusa, who forced Indy Eleven netminder Jordan Farr into his first save of the game in the 48th minute with an effort that had eyes for the right post. Indy’s high pressure to start the second stanza earned a handful of turnovers in their attacking third, and the effort paid off in the 51st minute when midfielder Nick Moon poked an errant SKC touch to Nicky Law. The Englishman carried into the area and fired a low shot that Pulskamp saved but spilled, and Hamilton turned on the jets to tap home the rebound from the six to even the match at 1-1.

Just after the hour mark Seagrist again set up Hamilton, this time with a perfectly weighted through ball from the midfield stripe that set up a 1-v-1 with Pulskamp, but the Canadian curled his effort wide of the near post. In the 66th minute Seagrist nodded a looping, back-post ball across the six, and while Hamilton stretched to reach he was unable to redirect. A minute later Eleven substitute forward Gordon Wild crashed the six and saw his header bounce near the goal line, the chance ultimately falling wide.

A full complement of substitutes by both sides, some injury stoppages, and a hydration break made for a choppy match down the stretch. However, the game snapped back to attention for a frantic finish in the 89th minute, when Pulskamp made a leaping one-handed save at his near post to bat away Manuel Arteaga’s lashed effort from the right side of the area. On the ensuing corner, a back post header by an Eleven player took a bounce inside the six before Pulskamp again reacted to swipe the ball away from his goal line.

Indy had one final chance as four minutes of stoppage time neared completion, SKC defender Graham Smith’s attempt to knick away a long diagonal ball instead going backwards and putting Wild into the right side of the area. The German gathered and cut back towards the spot for midfielder Jared Timmer, who shot directly into the chest of a recovering Smith on the goal line. The ball then bounced off the left post and back towards Timmer, whose off-balance redirect was again repelled by Smith inside the six-yard box. While the fruitless finish still earned Indiana’s Team a crucial point, the squad was frustrated not to earn more from a second half in which it outshot SKC by a 12-4 margin.

Indy Eleven comes back home again this Saturday, August 28, with the first of four straight Saturday nights at Carroll Stadium against Real Monarchs SLC. First kick on Bob Ross Night at “The Mike” is set for 7:00 p.m., and the limited number of tickets remaining can be secured by visiting  indyeleven.com/tickets or by calling 317-685-1100 during regular business hours. For full details surrounding the evening’s event, visit indyeleven.com/promotions.