Life, Death, and the Number 85 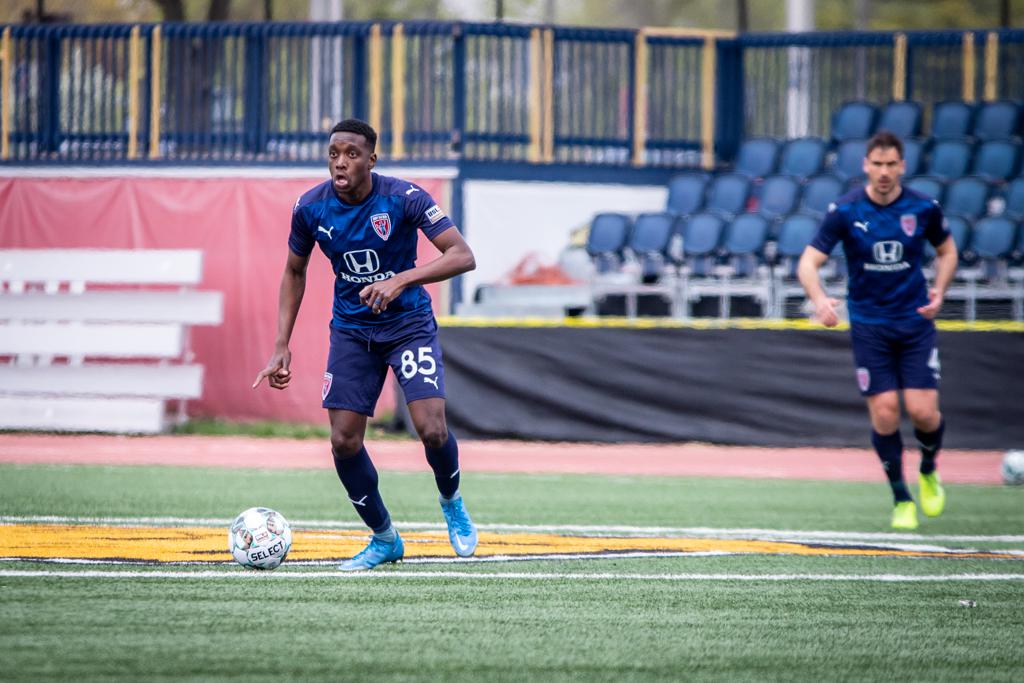 For Aboubacar Sissoko, life is about more than just soccer, it’s about perseverance. The 25-year-old has taken the field a handful of times for Indy Eleven in his first season with the Boys in Blue, and when he does so he dons the number 85, a number more commonly found on American football fields than in soccer, a sport where many positions are associated with certain numbers. For Sissoko this number represents much more than a personal preference, it symbolizes a journey filled with both triumphant victories and painful losses that have a bigger impact than just soccer.

Sissoko was born in the Mali capital of Bamako, one of the largest urban centers in West Africa. His father was a diplomat, and because of his profession the family eventually packed up and moved over 4,400 miles to their new home in Montreal, Quebec, Canada, at the age of 11.

Moving that great of a distance is something that most 11-year-olds would dread; an entirely new place with a completely different culture is a difficult adjustment for most adults, let alone a middle schooler. However, with a little faith, futbol and French, Sissoko was able to adapt quickly and feel right at home in Québec.

“My integration from Mali to Canada was easy because in Canada, and Montreal specifically, they speak French. In Mali they usually speak French too, so when I came the language wasn’t a barrier for me. The first day of school I made some friends, the first day. You know, they played soccer and I played with them. It was easy for me to be honest,” Sissoko explained with a smile on his face.

While the move separated Sissoko from his birthplace by the move, he maintained his roots and represented the place he called home as a child by playing for Mali’s Under-20 National Team.

Meanwhile in Montreal, a young Sissoko had adjusted to his new environment by making friends and excelling at soccer, but as he prepared to take bigger steps in the sport his resolve was put to the test.

In 2012, after six years in Canada, Sissoko’s father suddenly passed away at the age of 58. The passing weighed heavily on the youngster, who was able to lean on his mother during difficult times. His mother would attend his games, and was there for him in 2014 when the midfielder contracted malaria while participating in the 2015 African U-20 Championship Qualifiers that saw Mali eventually qualify for the 2015 FIFA U-20 World Cup. The disease was severe enough that it sent Sissoko into a brief three-day coma, and in eventually defeating the disease he gained a new lease on life.

Another sizeable change in his life, but this time for the better, was Sissoko’s decision to attend the Université de Montréal. He would star for the Carabins, leading the squad to Silver Medals in the USPORTS Men’s Soccer Championship in 2017 and 2019 and doing one better in 2018 by helping UdM to their first Gold Medal in the history of the competition. Not only did the starlet help his team, he stood out individually, winning Rookie of the Year in 2016 and being named as a First Team All-Star in 2017, 2018, and 2019 across Canadian University Soccer, as well as capturing the Canadian University Soccer MVP.

Thanks to his standout performances at Université de Montréal, Sissoko earned the chance to play professionally – and some fortuitous timing with the 2019 launch of the Canadian Premier League gave him a leg up to do so in Canada, with Halifax Wanderers FC officially signing Sissoko on November 28, 2019. Prior to the start of the 2020 season, Sissoko was allowed to exit the Wanderers camp to go on a three-day trial with Vancouver Whitecaps FC of Major League Soccer in February 2020, a stint that would ultimately last four weeks. However, the British Columbian Major League Soccer side finally opted against signing the USPORTS starlet, which meant a return to the Wanderers.

Preseason training with HFX was supposed to begin in March, but due to the COVID-19 pandemic the start of preseason training and the start of Sissoko’s professional career, was pushed back indefinitely. While he waited, Sissoko would garner one further award for his collegiate efforts, but another tragedy meant he would have to accept it without his biggest supporter present.

On May 1, 2020, Aboubacar’s mother passed away at the age of 58 from natural causes. The loss of another parent again weighed heavily on Sissoko, who this time had to deal with grief in the midst of a global pandemic that caused so many to feel isolated and alone. Six weeks later, Sissoko was honored with the Athlete of the Year in Canadian Men’s Sport award, Aboubacar dedicating the peak achievement in Canadian collegiate athletics to the parents who supported his dreams every step of the way.

Eventually, the Island Games were scheduled as a season/tournament to be played between Canadian Premier League teams on Prince Edward Island, beginning in mid-August. Less than three months after the passing of his mother, Sissoko made his first ever professional appearance on August 15, 2020 and he would go on to shine in his rookie season, appearing in 10 of the HFX Wanderers 11 matches and helping them secure a spot in the Island Games Final.

After the CPL season ended, Sissoko began to search for his next challenge, wherever that might take him. Ultimately, Sissoko turned his eyes towards the United States, and on February 10 of this year, his next challenge was presented after signing with Indy Eleven. The Mali international who had moved to Canada at a young age, had now found another new home in America. In Indy, Sissoko joined one of the most established clubs in the USL Championship – but one with some spaces on the field after an offseason roster overhaul that left room for competition in the midfield. It was Indy’s reputation for excellence and current and past players that influenced the second-year professional to join the Boys in Blue.

“I heard the team was one of the biggest teams in the USL [Championship] and they played big games, they won games and they completely believe,” said Sissoko. “That’s why I wanted to come here to learn. I looked at the roster and there were players with some big backgrounds, players who can help me to be better as a player. Every training I do here makes me better. It’s a big step for me and it was a big choice for me to get here.”

There’s no doubt it was a big step for the budding professional, and one that has come with its fair share of ups and downs. The man from Mali does a little bit of everything in his midfield role, looking to create for teammates, play solid defense and take the occasional shot at goal. While he continues to adapt and learn in the USL Championship, his fight for time on the field motivates him to keep working hard, even on off days.

“I’m learning some new formations. For me, in the past I played as the number six, but the coaches wanted me to play as an eight, so it is a new challenge for me. So, every day I try to learn and I try to be better,” Sissoko explained. “It’s good for me, [Indy] is the best place for me to grow as a player and as a person.”

It’s who he is as a person that is arguably even more impressive than who he is as a player. After losing both of his parents, he continues to keep pushing forward day after day. It’s something that stands out about Sissoko not only when you talk to him, but as he trains and plays as well. His personality and his willingness to give his all is something that the Eleven’s coaching staff, specifically Assistant Coach Phil Presser, appreciates about the young professional.

“The best part about Sissoko is one, his personality, how he carries himself day in and day out, how he’s a very respectful person, very competitive every single day no matter what time he gets on the weekend or not,” Presser explained. “It’s a testament to him as a person. He’s obviously had a very tough few years with his family and anybody who goes through that hardship goes one way or the other. With Abou, he’s very grateful with life in general, he doesn’t miss a moment, he doesn’t miss a beat, he’s always positive and he’s always there to help, not just others but to respect himself first and respect other people. That’s just what you’re going to get. You’re never going to see an Abou that is disrespectful. You’re going to see a player that does it for his team and others.”

So, why #85? It’s a number you don’t see many players represent on the back of their shirts on the field. Players often fight for a number based on their positions, with forwards looking for the 9 or 10 shirt and midfielders squabbling for the 6 or 8, but for Sissoko it’s not about that at all. It’s about remembrance and dedicating his game to those who can no longer be there to root him on in person. It’s about making sure the memory of his parents never leaves his side.

The last couple of years have been filled with some of Sissoko’s greatest accomplishments, but also some of the young midfielders toughest times. However, with a smile on his face and a desire to get better each day, Aboubacar Sissoko continues to light up every room he’s in and looks to light up the field for Indy Eleven, knowing that his parents will have his back along the way.