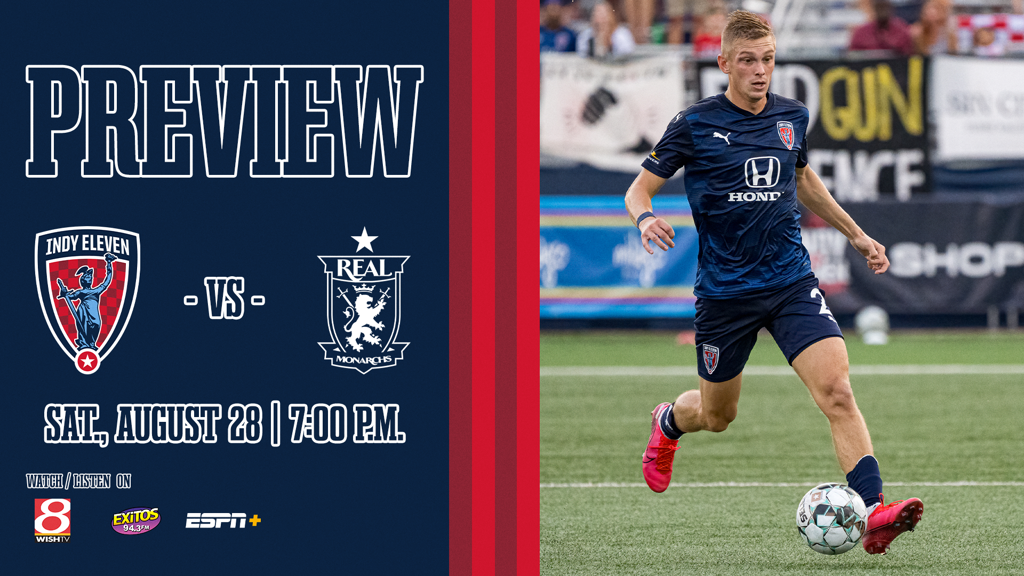 Indy Eleven has a third consecutive clash with a bottom-of-the-division side this Saturday night when Real Monarchs SLC comes to the Circle City. The biggest difference from Indy’s previous two contests last week – a disappointing loss at Loudoun United FC and a frustrating draw at Sporting KC II – is the setting, as Saturday’s match allows Indiana’s Team to enjoy some home cooking.

In a season where little has gone as expected for the Boys in Blue, Saturday’s match could actually provide a chance for some stability at Carroll Stadium. The Eleven bucked their early season home struggles by posting a 2-1 victory over OKC Energy FC two weekends ago, a result that snapped a five-game winless streak at “The Mike” and seemed to take a giant weight off the team’s collective shoulders. Despite a 2W-5L-2D home mark in 2021, with four consecutive Carroll Stadium Saturdays on deck the chance to turn the Eleven’s home venue into a fortress remains very much in play – and how those games turn out will likely also dictate the squad’s very-much-in-play chances at securing a playoff berth over the next two months.

Earning just one of six possible points across the last week – including Sunday’s 1-1 draw at SKC II in which the full three points were for the taking until the final action of the match – again rachets up the pressure on Indiana’s Team, which sits just off the wrong side of the playoff line in the crowded Central Division. If the last home outing is any indication, Interim Head Coach Max Rogers’ side will channel that supposed pressure into a literal high-pressure gameplan, an approach that paid some dividends in the second half of last Sunday’s draw in Kansas City, during which the Boys in Blue outshot SKC by a 12-4 clip.

Rogers should have the full compliment of his roster at hand, with midfielder Carl Haworth now officially off the injured list and Nick Moon and Jared Timmer looking ready for full plates of action coming off minor ankle injuries in recent weeks. With the full deck on hand and fully rested, Saturday night’s starting XI could provide a glimpse into what Rogers & Co. thinks is the best solution for continuity and success down the stretch ... but we’ll all have to wait until an hour before kickoff for what that formula will exactly entail.

On the opposite side, there’s Real Monarchs SLC, where consistency is a luxury – and just not really a thing this season. Due to its affiliation with Major League Soccer’s Real Salt Lake, the constant shuttling of players between the first team and Monarchs SLC has resulted in 37 different players seeing the field under Head Coach Jamison Olave in 18 games, and the team’s 4W-10L-4D record bears the marks of that inability to lean on a steady gameday roster.

However, much like it did versus Loudoun and SKC II, Indy is getting a look at a bottom-of-the-table team showing recent signs of success, Real Monarchs posting a pair of wins in its last four outings. That ledger includes a 1-0 victory in their last contest at a San Diego Loyal SC side currently in playoff position; unfortunately for Monarchs SLC, that match came three weeks ago on Aug. 7, as their previously scheduled contest last week at San Antonio was postponed. So on one hand, the Utah side will come to the Midwest refreshed and with their batteries fully charged ... but on the other hand, they may also have some rust to knock off their boots.

Scoring has been the issue for Real Monarchs SLC, which has bagged only 18 goals in as many games, tied for the third lowest across the Championship. Forward and RSL Homegrown Player Milan Iloski paces the squad with both four goals and three assists, while Charlie Wehan has provided some spark alongside Iloski since mid-June, bagging twice since his move over from New Mexico United. The defense has had its struggles as well with 30 goals conceded (the same amount as Indy, to be fair), but in that never-ending search for continuity the club does appear ready to give the keys to Jeff Dewsnup. While his 2.00 goals against average is part of the learning curve, there’s more than a little bright side, as the 17-year-old became the youngest goalkeeper in USL Championship history to post a clean sheet his last time out.

After living on opposite sides of the USL Championship’s conference tables since Indy’s entrance in 2018, Saturday’s meeting at The Mike marks the first time the squads will meet in inter-conference (or, more accurately this season, inter-divisional) action. This marks the fourth and final such cross-conference affair this season for Indy, which is looking for its first point in such games after losses at El Paso and Loudoun United FC and at home to Pittsburgh Riverhounds SC.

Defenders Neveal Hackshaw and Ayoze have been the typical duo fans have grown accustomed to seeing stationed along the left flank. However, as both have seen an influx of minutes due to national team obligations, injuries, or general squad rotation, Seagrist has become a trusted replacement in their stead. The 23-year-old has made 18 appearances – 11 in the starting XI – so far since joining Indiana’s Team on loan from Major League Soccer’s Inter Miami CF prior to the start of the 2021 season.

The Barrington, Ill. native’s versatility has been an asset for Coach Rogers as he continues to manage his players’ minutes through spells of fixture congestion. Currently sitting at 14 clearances, three blocks and 22 tackles, Seagrist’s aggression has aided in shutting down opposing wingbacks’ passing lanes and prevented them from making short bursts into the 18 while tasked with holding down the back line. On the flip side, his speed and ability to pick passes in the opposing half makes Seagrist just as threatening when attacking along the flank – as evidenced by no less than four stellar balls served deep inside the area throughout last Sunday’s contest at SKC.

Seagrist’s equal on the opposing side of the pitch in Adams will look to limit Indy’s attacking opportunities. The New Zealand national has started in 16 of his 18 appearances in his first season with the RSL-affiliate side and currently leads his rotating cast of teammates in minutes played by a large margin (1,487).

Adams is a statistical leader in several categories, including passes (892), clearances (65), blocks (25), interceptions (27), aerial duels (62) and aerial duels won (32), making him a daunting figure in the Monarchs’ defensive setup. Moreover, heat maps would suggest that Adams tends to hover between his side’s 18-yard box and the center line, meaning that the Boys in Blue attacking corps will need to devise a way to break through the 24-year-old’s stronghold.