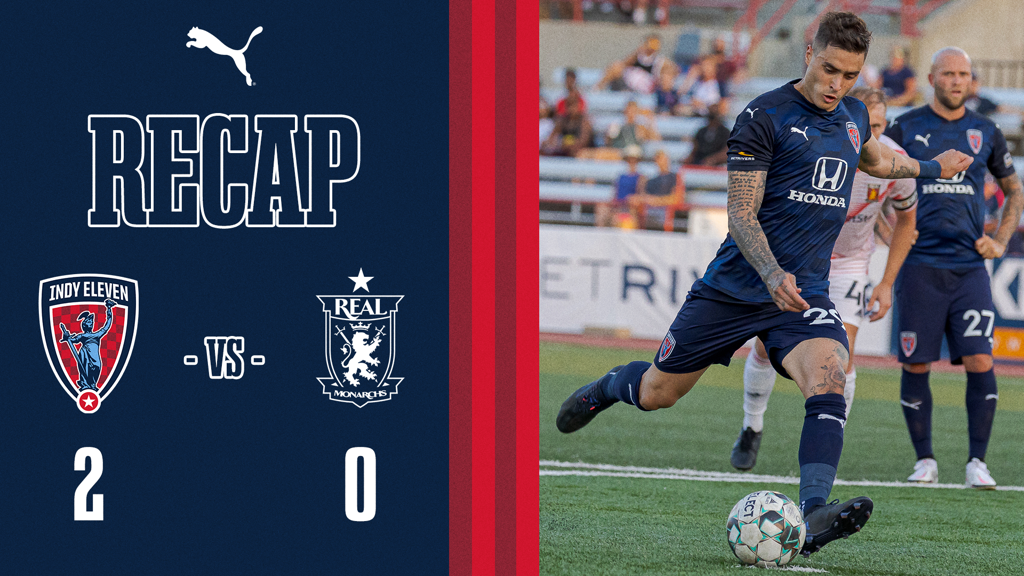 INDIANAPOLIS, Ind. – Indy Eleven jumped back into the win column Saturday evening courtesy of a pair of goals from forward Manuel Arteaga, the Venezuelan doing all the scoring necessary in a tidy 2-0 victory at IUPUI Michael A. Carroll Stadium. Eleven goalkeeper Jordan Farr made four saves to collect his fourth clean sheet of the season, and the team’s fifth of the campaign.

With the win, Indy Eleven (7W-8L-5D, 26 pts.) registered back-to-back wins at home for the first time in 2021. Indiana’s Team also catapulted back above the playoff line in the Central Division, its three points combining with an Atlanta United 2 defeat at FC Tulsa to push Indy into fourth place.

“It’s a start,” stated Indy Eleven Interim Head Coach Max Rogers. “It’s good to have two wins at home and start to build that confidence, but we have to now go again and do it against Atlanta United 2 next weekend and make sure that we continue to pick up three points and deliver good performances.”

SLC’s leading scorer Milan Iloski rang the game into life in the fifth minute, his 25-yard shot forcing Farr into a strong two-handed parry over for a corner. Three minutes later it was Indy midfielder Nick Moon stepping up into the area to snap off a rising shot from 15 yards out that failed to challenge Real Monarchs netminder Blake Kelly, a Michigan native making his professional debut as the third-youngest player to take the field in USL Championship action this season at 15 years, seven months, and seven days of age.

Kelly earned his first save in the 16th minute after Gordon Wild got free in the right side of the area, but Indy’s next chance ten minutes later couldn’t be stopped. Moon marauded down the right flank and into the area before dribbling a short cross to the top of the six that a sliding Arteaga redirected past Kelly to put the Boys in Blue ahead.

Under hot, humid conditions, play settled in midfield for most of the rest of the half. SLC would earn one more solid chance in the 41st minute when defender James Moberg saw his dipping shot from outside the area saved by Farr at his left post. Just as the match entered three minutes of stoppage time, a spell of Indy possession in the SLC 18-yard box ended with Wild forced to the ground by contact from defender Sam Brown, earning a penalty kick at the death of the half. Arteaga stepped up and buried his shot low and to the left of Kelly, giving Indiana’s Team some vital breathing room heading into the half at 2-0.

Salt Lake was unlucky not to equalize five minutes into the second stanza. A deflected cross fell across the six and towards an onrushing Malik Johnson at the far post, but the midfielder pushed the shot wide of the open net and the near left post, the miss bringing the Salt Lake midfielder to his knees. The hour mark saw Arteaga run onto Wild’s popped up cross at the far-left post, but the Venezuelan skied his near-angle chance.

Farr was called upon again in the 65th minute, when he guarded his near post with a double-palm save on Johnson’s near-post look. A few minutes later Bode Davis picked out Iloski’s run through the box, but the forward’s redirect bounced just wide left. Farr could do nothing in the 77th minute when Brown got his head to a corner kick deep inside the six, but the ball glanced off the woodwork and was cleared from danger. Farr’s efforts continued in the 86th minute, when he batted away Davis’ shot from distance that had some english on it, steering it around the left post.

Indy Eleven made sure to use its full compliment of subs, none more so anticipated than the 87th minute insertion of midfielder Carl Haworth, the Canadian veteran making his season debut after recovering from a preseason leg injury. Three minutes deep into stoppage time Eleven midfielder Gershon Koffie tried to end things with a flourish, only to see his first effort from the top of the penalty area clang off the crossbar and his second slice just over on the rebound – but by then the Boys in Blue had done more than enough to take their second straight at Carroll Stadium.

Indy Eleven continues its streak of four consecutive Saturdays at Carroll Stadium next weekend, when Indiana’s Team will host Atlanta United 2 (6W-9L-5D, 23 pts.; 5th place in Central) for a Labor Day Weekend clash on Sept. 4. Tickets for the 7:00 p.m. ET match presented by IBEW Local 481 – which will feature $4 beers and $11 hot dog combos – can be secured by visiting  indyeleven.com/tickets or by calling 317-685-1100 during regular business hours. For full details surrounding the evening’s events, visit indyeleven.com/promotions.