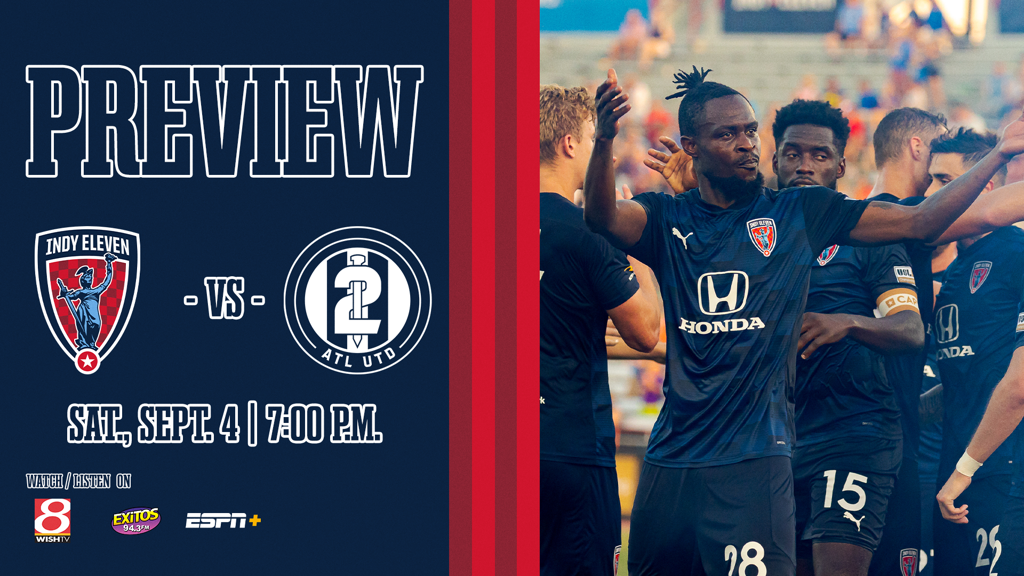 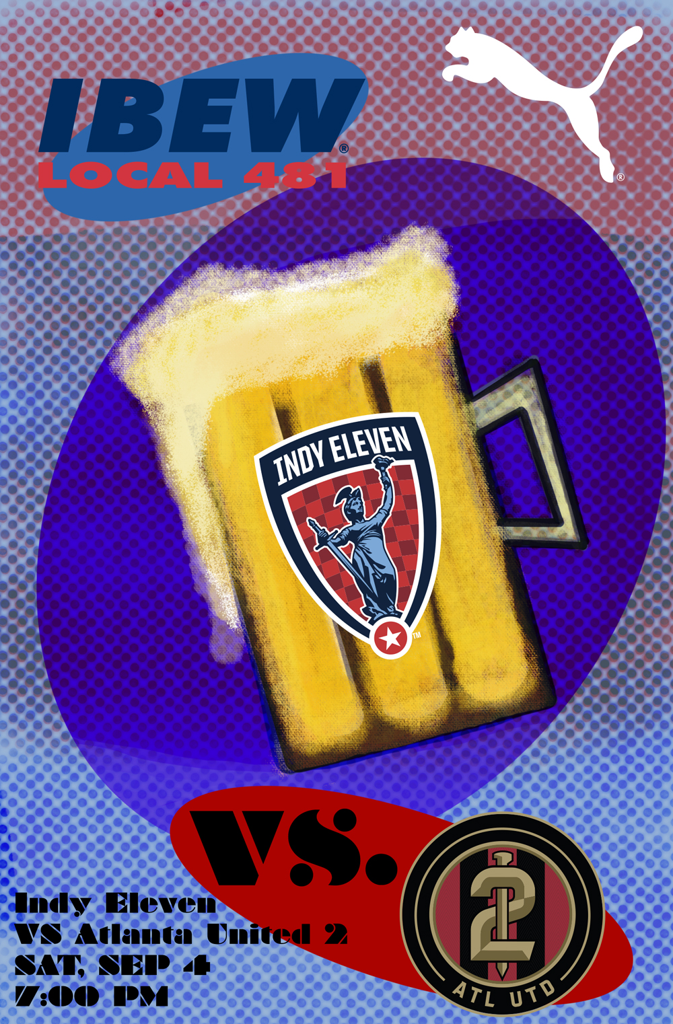 Be sure to pick your #INDvATL poster up at the Customer Service tent on the West Concourse while they last! 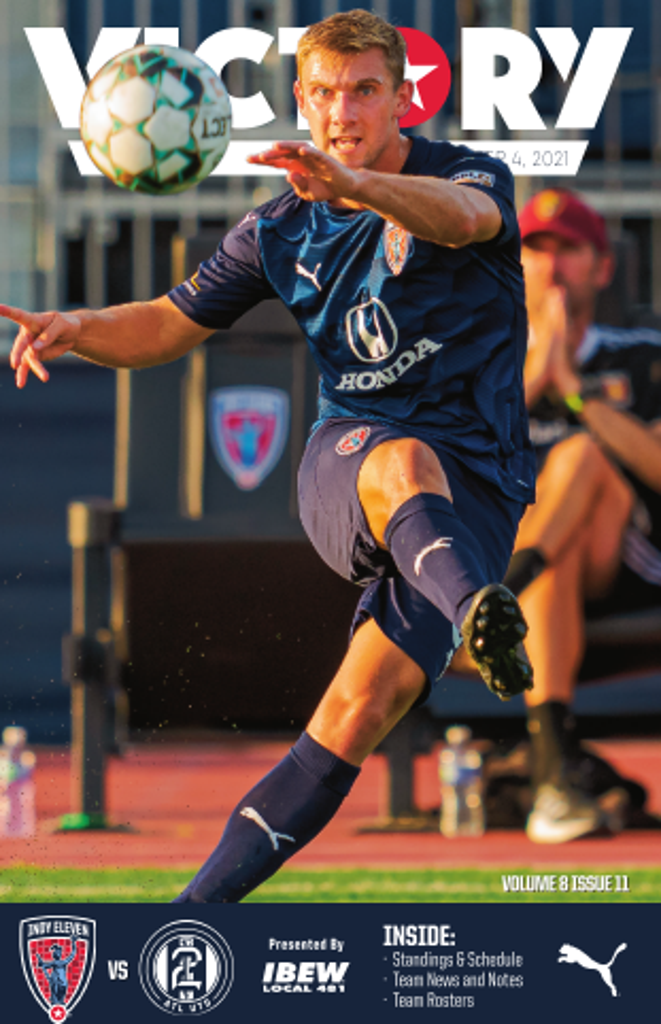 With all four inter-divisional games ticked off the schedule, it’s nothing but Central Division showdowns moving forward for Indy Eleven starting Saturday against Atlanta. Three weekends ago, ATL UTD 2 handed Indiana’s Team one of the worst defeats in the club’s USL Championship era, but there’s more important matters at hand than petty payback – as the calendar flips to a seminal seven-game September for the Boys in Blue, it’s now all about playoff positioning ... 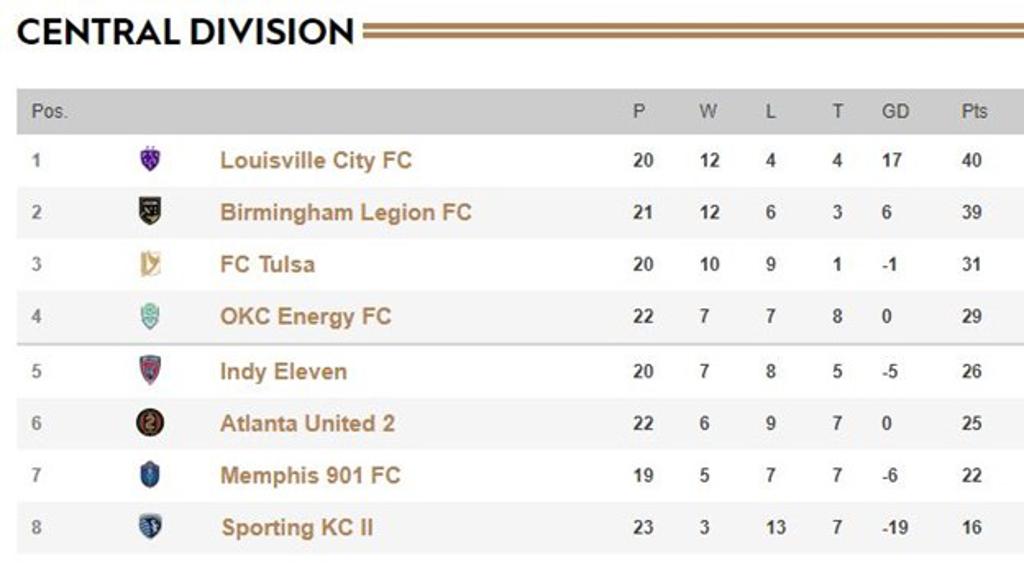 ... and you can see why, as Indy Eleven remains tucked squarely in the middle of the Central table, currently just on the wrong side of the playoff line (with the caveat of having two games in hand on fourth place OKC). The Eleven begin the month with three of four at home before finishing out with a three-game road trip, making those contests at “The Mike” against Atlanta (Saturday), Sporting KC II (Sept. 11) and LouCity FC (Sept. 18) not “must-wins” ... but, to paraphrase that famed sage Meatloaf, two outta three here wouldn’t be bad – and may just prove necessary to keep pace.

The good news on that front? Indy has seemingly exorcised its demons at Carroll Stadium, collecting wins there the last two times out. The includes last Saturday, when forward Manuel Arteaga bagged his team-leading fifth & sixth goals of the season in a 2-0 win over Real Monarchs SLC. With Thursday’s mutually-agreed upon departure of fellow forward Jordan Hamilton, Arteaga is now the unquestioned talisman up top heading into the stretch drive. With that now abundantly clear, you can bet Interim Head Coach Max Rogers will further solidify the team’s high-pressure tactics that are heavily influenced by the Venezuelan’s endless energy at the point of the three-man frontline.

Perhaps more important the last time out was the defensive effort, which included goalkeeper Jordan Farr making four saves en route to collecting the team’s first home clean sheet in eight outings dating back to a 2-0 win over SKC II on May 22. Center back A.J. Cochran spoke after the game about the team refocusing its efforts on securing shutouts at home and just making Carroll Stadium a tougher place to play for the opposition in general. Mission accomplished the last two games, but those were also against two of the weaker attacks in the league – it will have to emerge as an even larger emphasis against an Atlanta side whose 36 goals ranks fourth most across the entire Championship.

Indy’s attack will be down another option temporarily after Peter-Lee Vassell reported to the Jamaican National Team early this week ahead of the Reggae Boyz’ trio of World Cup Qualifiers; he’ll miss the squad’s next two contests and should be available for selection next Saturday against SKC. Vassell’s presence should be offset by the continued return of winger Carl Haworth, whose 86th minute cameo against Real Monarchs marked the Canadian’s 2021 debut after recovering from a preseason leg injury.

And make no mistake, ATL UTD 2 will look to “run and gun” its way to success on Saturday – and “2” looks to be their magic number. Atlanta has gone undefeated in the 10 games in which it’s scored at least twice (4W-0L-6D) but has registered a rough 2W-9L-1D record when scoring once or not at all. As impressive as Atlanta’s 36 goals scored have been, the same amount of concessions (fifth most in the Championship) have made an arguably bigger mark on their season, with the Georgia side sitting three games on the wrong side of the .500 mark.

Three gaudy wins over FC Tulsa (5-0), Indy (6-2) and SKC (4-1) – the last two of which have come in recent weeks – have done wonders for Atlanta’s goal differential, and that could prove important if the standings remain as tight as they’ve been. However, heavy losses the last two weekends at Pittsburgh (1-4 L) and Tulsa (1-3 L) have tipped the “GD” scales back to even and moved Atlanta’s road record to 1W-7L-3D on the season, a trend that Indiana’s Team will look to continue Saturday as it tries to make “The Mike” a true fortress for the stretch drive.

Deuces are wild for Indy Eleven & Atlanta United 2, with each holding a 2W-2L-2D record in their series heading into Saturday night’s clash at Carroll Stadium. Both meetings earlier this season were contested at Fifth Third Bank Field in suburban Keenesaw, Ga., where the teams dueled to a 1-1 draw on July 7 before ATL dominated from the jump in a 6-2 win on August 8. This year’s series will end back at “The Mike” on October 2.

The only two previous matchups in the Circle City yielded wins for the Boys in Blue at Lucas Oil Stadium, captain Matt Watson notching an early game-winner in a 2-0 victory on June 9, 2018, followed by Alioune Diakhate’s 84th minute goal – his first and only with the Eleven – marking all the scoring in a 1-0 triumph on June 22, 2019.

If the only thing you noticed about Koffie during his full 90 performance last Saturday were his back-to-back chances from the top of the 18 in second half stoppage time, we’re gonna take you to task a little bit. The Ghanaian was perhaps the most active player on the pitch, covering more ground than any of the Boys in Blue, completing 49 of his 57 passes (both second highest on the squad) on the evening – more than half of which (26) came in the opposing half of the field – while also winning three tackles, two interceptions, a team-high nine possessions gained, and four of his seven duels.

Koffie’s active night played a big part in helping Indy Eleven own a 31%-22% advantage when it came to time spent in the final third. And during the other 47% when the ball was in the middle third? The above stats show just a glimpse of why Koffie essentially owned “Route 1” between the penalty boxes. To go along with that grit, some class as well ... go back and watch his “hockey assist” on the Indy opener, his ball from midfield springing Nick Moon down the right flank to set up Arteaga’s eventual game-winner.

That two-way play is exactly what Koffie was brought to Indy to deliver, and Saturday evening provided perhaps the best display of what the recently-turned 30-year-old can do in that deep-lying midfield role. An injury kept Koffie home from Indy’s nightmare trip to Atlanta last month, so it will be interesting to see how his presence will affect the rhythm of both sides’ play through the center of the pitch this time around.

One player who might see a lot of Koffie in that middle of the park Saturday is Fortune, the 18-year-old Atlanta United Academy product who has made 15 appearances for ATL UTD 2 this season but was only officially signed by the USL Championship outfit last week. In recent weeks Fortune has been called to serve at various spots on Atlanta’s three-man midfield line ... but no matter where he has lined up, his heat maps show a tendency to drift to the center channel – and if that is the case, you can be sure he’ll meet acquaintances with Koffie plenty.

But therein lies the issue for Atlanta, which has seen Robbie Mertz take a more attacking presence from his spot on the midfield three. Should that be the case on Saturday, that will leave Fortune and Christian Wiley the tall task of going toe-to-toe with Moon & Co. down the right flank, especially on quick counter opportunities. Like much of ATL’s roster, while the young Fortune may favor to boldly attack, he’ll have to balance that want with the need to stay back and defend with numbers, especially if Indy can continue its recent trend of holding more of its possession in its attacking third.