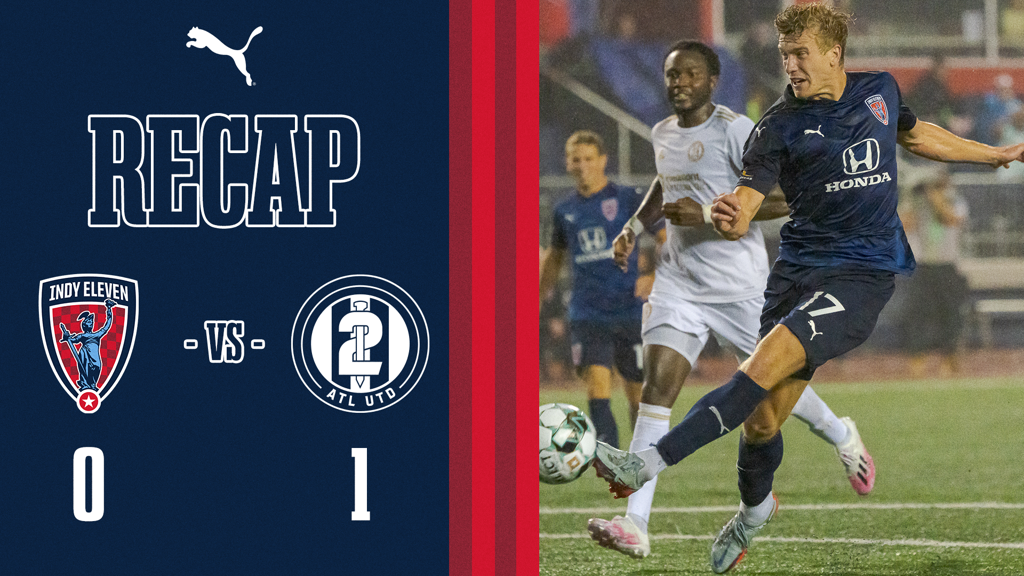 INDIANAPOLIS, Ind. – Indy Eleven saw its recent run of form at home run out on a soggy Carroll Stadium pitch this evening, as Atlanta United 2 used a first half goal by Aiden McFadden to post a 1-0 win over Indiana’s Team.

Despite the defeat, Indy Eleven (7W-9L-5D, 26 pts.) remains within a win of the fourth and final playoff spot in the Central Division. However, Atlanta United 2 was able to leap over Indiana’s Team in the standings and now sits on 28 points, with both teams lurking behind fourth-place OKC Energy FC on 29 points.

With a slick turf after a rain-soaked day in the Circle City, Indy seemed eager to try some chances from distance with the hope of skipping something past Atlanta United 2 goalkeeper Ben Lundgaard. However, the former Eleven ‘keeper did well to gobble Jeremiah Gutjahr’s one-hopper in the 19th minute, and he did one better a few minutes later to steer midfielder Nicky Law’s rip from 30 yards around his left post for a corner.

Atlanta had its own chances of note early, but Matias Benitez’s snap header in the ninth minute went right to Eleven goalkeeper Jordan Farr on his line, and midfielder Robbie Mertz’s sidewinding volley in the 14th minute rose just over the bar. It was indeed the visitors that would move the scoreboard first in the 26th minute when Aiden McFadden collected a recycled clearance just outside the area and curled a beauty inside the far-right post to put ATL UTD 2 up 1-0. It was Benitez who would have the best chance on goal the remainder of the half, but Farr stood his ground well and got low to bat away the forward’s chance from just inside the six-yard box.

The second half was pretty much one way traffic towards the Atlanta goal, with Indy Eleven outshooting Atlanta 11-2 across the second stanza. Law was often the focal point for Indy early in the half, however the Englishman would see Lundgaard make two solid saves in the 52nd and 58th minutes. In between Atlanta striker Amadou Diop’s galloping run down the left flank ended with his chance from the top of the area missing high in the 55th minute.

Indy Eleven Nick Moon was active all evening on the right flank, and his service to Gordon Wild in the heart of the area in the 68th minute already paid dividends, but the German’s turn-and-fire attempt was blocked off his foot for a corner. A minute later the tables were turned as Wild flicked a nifty ball from midfield up Route 1 for Moon to run onto, but Christian Wiley’s sliding tackle again provided a crucial bloc for the visitors.

Atlanta was able to play out the stretch without giving up many chances of note, Manuel Arteaga’s off-balance header that drifted high in the 86th minute and Moon’s blast from 20 yards that sailed high in the 89th minute giving the drenched home crowd the most hope. However, ATL UTD 2 would see it out and garner the full three points, snapping Indy Eleven’s modest home winning streak at a pair of games.

Indy Eleven’s monthlong streak of home Saturdays will be interrupted this Wednesday, Sept. 8, when Indiana’s Team heads west to Oklahoma to face off with FC Tulsa. Kickoff from ONEOK Field is set for 8:00 p.m. ET (live on ESPN+).

The Boys in Blue will then return home next Saturday, Sept. 11, when it will host Sporting KC II. Tickets for the 7:00 p.m. ET match on Faith & Family Night at Carroll Stadium can be secured by visiting  indyeleven.com/tickets or by calling 317-685-1100 during regular business hours. For full details surrounding the evening’s events, visit indyeleven.com/promotions.