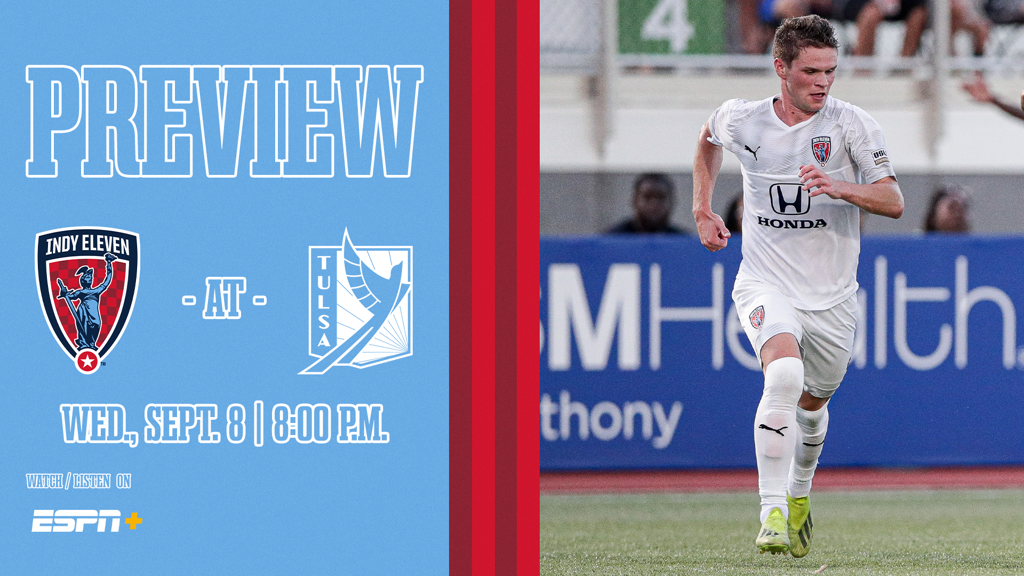 Indy Eleven’s month-long homestand of Saturday nights will be interrupted on Wednesday, when the Boys in Blue head west to Oklahoma to face a surging FC Tulsa squad.

The Eleven’s roller coaster of a season continued last Saturday with a 0-1 loss to Atlanta United 2 that helped the Georgia side leapfrog Indy in the Central Division standings. The result snapped a modest two-game home winning streak and leaves the Eleven focused on breaking up a four-game road winless streak, though it’s last travels on Aug. 22 to Sporting Kansas II resulted in a point gained from a 1-1 draw.

In fact, the latest away win for Indy was a 2-0 triumph at ONEOK Field back just over a month ago on August 4. If the Circle City squad can replicate that performance, then a climb up the table to third remains a task, but realistic; a loss would make the final 10 games more than likely a fourth-or-bust proposition.

Tulsa’s season to this point has been a streaky one, and unfortunately the Eleven are catching the Oklahomans on a roll. Winners of five of their last six and four on the trot, Tulsa claimed perhaps their biggest three points of the season via a 1-0 win at division leading LouCity FC last Friday.

Since being shutout by Indy last month, Tulsa has bagged 12 goals across their last six outings, with Marlon, Dario Suarez, Lebo Moloto, and Matthew Sheldon all contributing multiple tallies during the blazing hot stretch. Perhaps the scariest part of Tulsa’s recent form is that leading goal scorer (8) and co-leading assist (4) man Rodrigo da Costa has not contributed at all on the scoresheet in that six-game stretch, reinforcing Tulsa’s “by committee” approach in attack.

FC Tulsa’s move to the Eastern Conference for the 2021 USL Championship campaign marked the start of a new series for Indiana’s Team (in addition to Tulsa’s Sooner State mate, OKC Energy FC). FC Tulsa made Indy’s homecoming to IUPUI’s Michael A. Carroll Stadium a rude one back on May 8, as Joaquin Rivas’ second half brace spoiled Indy’s 2021 home opener via a 2-0 defeat. Indiana’s Team returned the favor at ONEOK Field on August 4, late goals by Gordon Wild and Peter-Lee Vassell helping the Boys in Blue claim a 2-0 road win of their own.

Following Wednesday’s affair in Oklahoma, the Central Division foes will bookend Indy’s Carroll Stadium slate on Saturday, Oct. 23, when they meet up in the Eleven’s 2021 regular season home finale.

While the injury bug continues to plague the Boys in Blue, Gutjahr has become a go-to option for Coach Rogers in recent weeks. The Indiana University alumnus has begun to pick up steam after appearing in the starting lineup in Indy’s last five matches, adding to his 16 appearances (nine starts) on the season. Though he’s yet to score, Gutjahr has accumulated one assist on three chances created so far this season and is one of the team’s most successful distributors in the opponent’s half (74.3%).

The 24-year-old is active all across the midfield, making him a wild card presence for opposing players. His speed constantly keeps the opposition guessing what he’s going to do next, and often contributes to quickly wearing down defenders’ legs on attacking breaks. Gutjahr will be tasked with keeping the Tulsa back line busy throughout Wednesday evening to keep attacking opportunities open for his teammates.

FC Tulsa is streaking, and much of the team’s offensive success can be contributed to Suarez’s skill in the attacking third. The 29-year-old has been a mainstay in Tulsa’s lineup since joining the squad prior to the start of the 2020 season, his efforts earning him the FC Tulsa Offensive Player of the Year accolade after netting eight goals and an assist throughout the condensed campaign. Dario is writing a similar story so far in 2021, currently tied second in goals scored (5) and tied third in assists (3) among his teammates in his 21 appearances on the season.

Despite the rocky start to the campaign, Tulsa’s four-game winning streak has its neighbors on the Central Division table watching closely, due in part to Dario’s performances. In the last four games, Dario has scored two of Tulsa’s combined eight goals and tallied one assist on three chances created, making him just one party of the attacking threat the Oklahoma squad has to offer. The Cuban national can typically be spotted hovering high along the right flank, often a key asset in jumpstarting Tulsa’s movement into the final third. It’ll be up to Indy’s midfield to neutralize Dario’s access over the centerline early to shutdown Tulsa’s in-form offense.