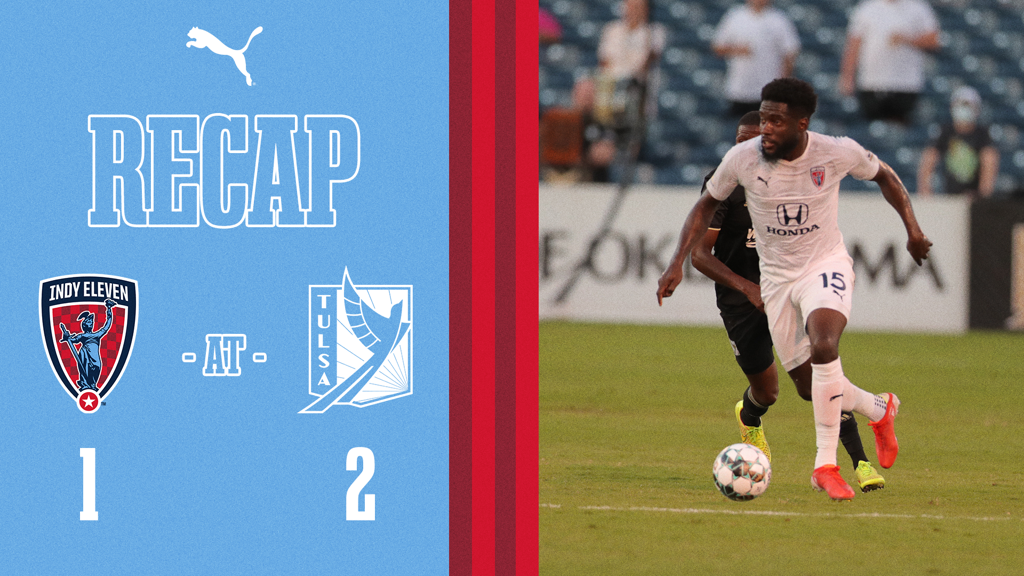 “We did really well to compose ourselves and get back into the game, and in second half we were, I thought, the dominant team,” said Indy Eleven Interim Head Coach Max Rogers. “Obviously they still threatened on the counter, as you would expect, being the in-form team they are, but that just showed the quality that we have. We were able to go up against them and create chances where we really should have scored more ourselves, so that's a real positive.”

Wednesday’s loss changes very little in the current Central Division standings, as Indy Eleven (7W-10L-5D, 26 pts.)  still remains within a win of the fourth and final playoff spot with a game in hand on the two teams ahead of in in the standings – Atlanta United 2 (5th) and OKC Energy FC (4th).

FC Tulsa aimed to make a statement early in an attempt to keep its club-record four-game winning streak alive with back-to-back chances in the opening 10 minutes of the match. Tulsa forward Dario Suarez sparked the first bit of danger the 7th minute after quickly dribbling through Indy’s back line and hammering a shot from the top of the six, only to be batted down by Eleven goalkeeper Jordan Farr and cleared away by defender Neveal Hackshaw. However, Tulsa’s persistence paid off two minutes later as forward Jason Johnson brought down teammate Lebo Moloto’s cross inside the 18-yard box for a chance at the far-left post, but as soon as Farr palmed the ball to the middle of the box Santos stepped up and buried it in the back of the net before the ‘keeper could reposition himself.

The hosts continued with an onslaught of chances in the 20 minutes that followed. Farr was forced into a smothering save in the 14th minute as a 30-yard free kick from Moloto deflected off the head of Tulsa captain Bradley Bourgeois to the lower left corner of the goal, an attempt the officials abruptly deemed offsides. Another deep cross from Moloto tested Farr once again in the 21st minute, the ball sailing to Santos on the edge of the byline for a shot that slammed the side netting. Tulsa’s final chance of the half came at the half hour mark after Suarez broke through Indy’s defense for a shot that Farr confidently pawed down for Hackshaw to clear away once again.

It took Indy Eleven 33 minutes to find its first look at Tulsa’s frame, when a free kick from veteran midfielder Ayoze swerved over the wall of players and into substitute ‘keeper Austin Wormell’s gloves. That one look was all it took for Indy to find the spark it needed to level the game, as a poor clearance inside Tulsa’s box left enough space for Arteaga to sprint in and net his team-high seventh goal of the season. The clock eclipsed into an additional five minutes of stoppage time, but neither side posed a threat heading into the break.

Indiana’s Team started the second stanza very much on the front foot with a flurry of chances at Tulsa’s net, the most dangerous coming off the foot of defender Rece Buckmaster 10 minutes after the whistle. Midfielder Nicky Law jockeyed an opposing defender along the left side of the box, pulling away with enough space for a cross that found the Indiana University alumni near the opposite corner of the 18 for a low volley at goal that was deflected away by Bourgeois.

Law caused trouble for the Tulsa defense once again in the 70th minute after cheeky passing from Arteaga and substitute Gordon Wild primed the charging Englishman for a shot, but defender Jorge Corrales stuck his boot out just as the ball left the midfielder’s foot to block the chance. It wasn’t 30 seconds later that FC Tulsa began reapplying pressure when Santos’ long forward pass slipped through traffic and to the feet of Johnson for another shot into Farr’s chest for the save.

Moloto continued to display his playmaking abilities in the 72nd minute with a speedy cross along the top of Indy’s 18 to Johnson, the Happy News, Jamaica native taking a few touches before launching another low shot towards the far-right post, forcing another leg-splitting save from Farr.

The Boys in Blue nearly found the lead in the 80th minute when a poor giveaway in front of Tulsa’s goal fell to the feet of Law for a close-range blast, but 23-year-old Wormell immediately fell to swat the shot away before crossing the goal line. Indy had one final chance in the 84th minute when some one-two passing in Tulsa’s box created another close opportunity for Wild, but the German striker’s low challenge was halted as Wormell dove in front of the shot.

Just as the result was looking to be spilt, a challenge called on defender Karl Ouimette near the top of Indy’s box led to a controversial penalty awarded to Tulsa substitute Lucas Coutinho in the 86th minute. Despite the protest from the surrounding Eleven players, the call stood as Suarez approached the penalty spot, sending his shot right down the middle and into the back of the net. The clocked ticked into the final six minutes of stoppage time, but Suarez’s PK at the death acted as the game-winner for the home team.

The Boys in Blue will continue their month-long streak of weekend home matches this Saturday, Sept. 11, when they host Sporting KC II. Tickets for the 7:00 p.m. ET match on Faith & Family Night at Carroll Stadium can be secured by visiting  indyeleven.com/tickets or by calling 317-685-1100 during regular business hours. For full details surrounding the evening’s events, visit indyeleven.com/promotions.