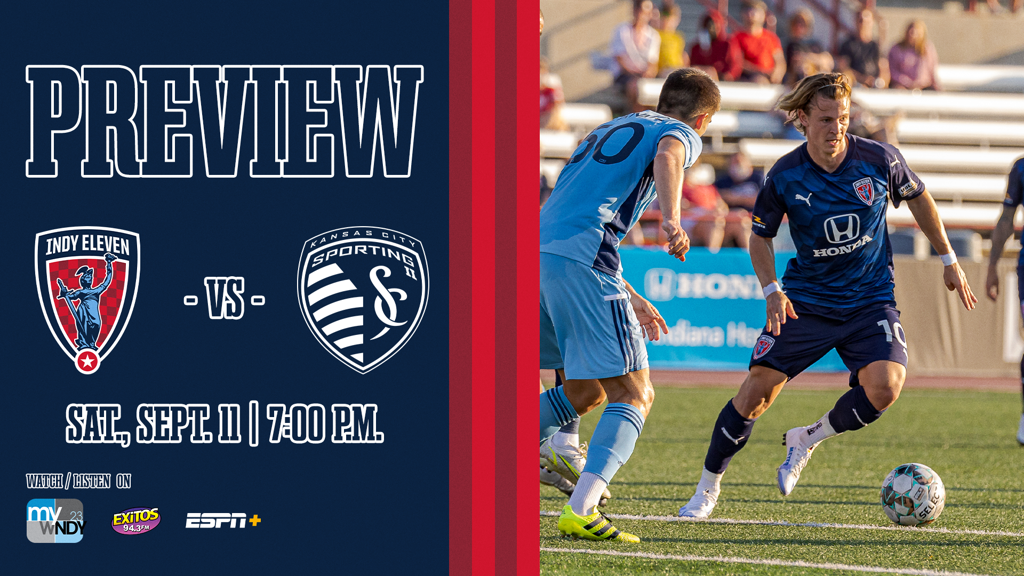 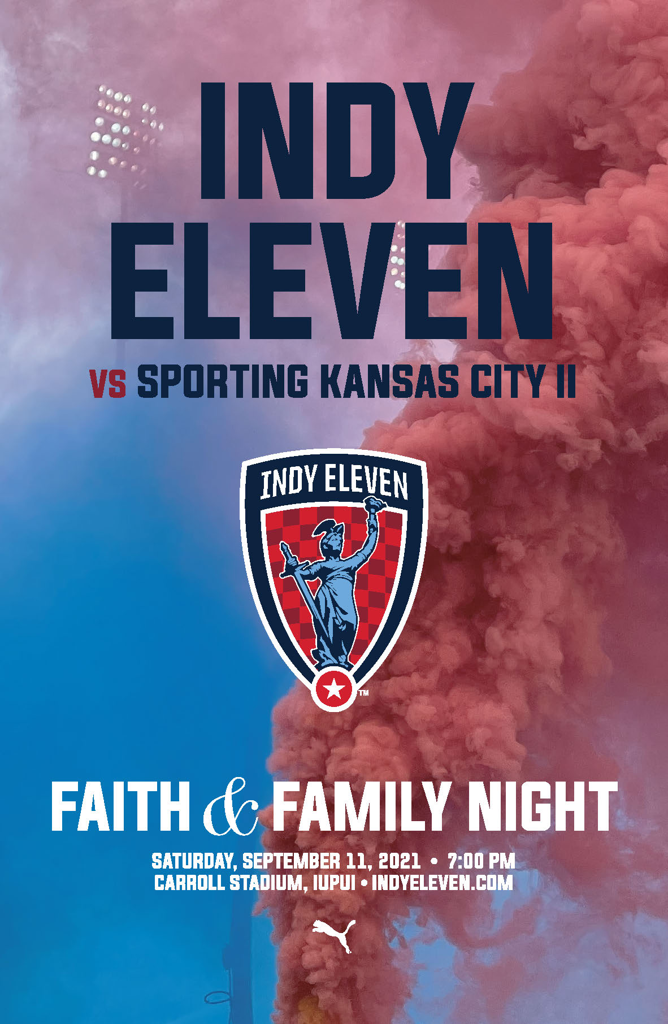 Be sure to pick your #INDvSKC poster up at the Customer Service tent on the West Concourse while they last! 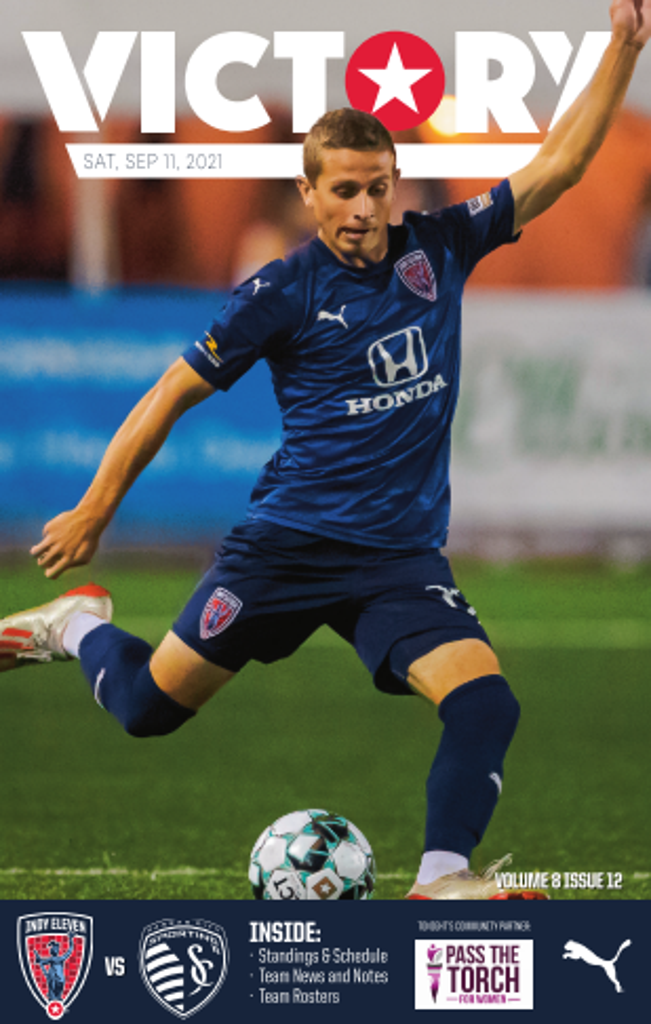 Indy Eleven returns home this Saturday to square off against Sporting KC II for a fourth and final time in 2021 – and Indiana’s Team will do so with a “three points or bust” mentality as it looks to keep up with the playoff pace in the Central Division.

Why such urgency to win with 10 games left on the schedule? Because after Saturday night, it’s a nine-game gauntlet to the finish where every match comes against a team Indy is fighting against for the fourth playoff spot or jockeying for position for a top-two slot that will come with homefield advantage in the opening round of the postseason. With five of those nine coming on the road, needing to claim three points at home every time out is starting to become more than just coach speak, it’s starting to become a reality for Indy’s playoff chances.

Sporting is the lone of the eight teams in the Central whose playoff hopes are dim, currently sitting 10 points under the playoff line while having the most games played in the division. While there have been no “easy games” on the Eleven’s schedule this season, there is room for optimism against a Sporting side that Indy has gone undefeated against thus far at 2W-0L-1D.

If it’s possible to enter a match with momentum coming off a loss, Indy could very well do so after controlling traffic for the last 60 minutes of Wednesday night’s disappointing 2-1 defeat at FC Tulsa. While the last-minute (and somewhat controversial) nature of the loss left the Boys in Blue stinging, the jumpstart of the squad’s attack by Manuel Arteaga’s team-leading seventh goal of the season in the 34th minute signaled a surge that resulted in 13 shots on the evening, the second most in a road game this season.

The most shots on the road this season for Indy? That would be 15 in the Eleven’s meeting at SKC less than three weeks ago – and that’s no anomaly, as the Boys in Blue have turned their matches against the Kansas side into carnival games ...

Meanwhile, SKC II will carry their own good feels into the weekend, a 3-0 win over OKC Energy FC at home last Saturday marking perhaps their most comprehensive performance of the season. That triumph – featuring goals by Osvaldo Cisneros (20’), Rojay Smith (72’) , and Enoch Mushagalusa (79’) – snapped a nine-game winless streak for Sporting dating back to a 1-0 win at Atlanta on July 10. In the two months since that result, SKC II has been outscored 8-3 in three away matches (2 losses, 1 draw) – and their road form could still be rusty, as Saturday night marks their first road trip since a 4-2 defeat at Birmingham exactly one month prior.

In contrast to a season ago when they split their four-game season series down the middle, Indy will look to close out the teams’ 2021 slate undefeated on Saturday night. The Boys in Blue have collected a 2W-0L-1D record against the side in the Central Division basement this season, using a 2-0 home win in late May and a 2-1 victory in Interim Head Coach Max Rogers’ debut in Kansas on June 20 to gain the upper hand.

The two sides met again just a few weeks ago at Children’s Mercy Park on Aug. 22, goals by Wilson Harris and Jordan Hamilton offsetting each other in what was the first draw in the nine-game series to that point. In all, Indy Eleven has dominated the series with SKC II, collecting a 6W-2L-1D mark and 15-9 advantage in goals scored; that includes a 4W-2L-0D (9 GF/6 GA) record in games contested in the Circle City.

With Indiana’s Team preparing for its third game in a seven-day span, squad rotation is likely going to play a major role in Coach Rogers’ lineup decision heading into the weekend. Regardless of a starting position or coming off the bench, Wild will be a crucial component of Indy’s offensive setup come Saturday night at Carroll Stadium.

The German striker has been especially proficient in the attacking third when facing off against Sporting Kansas City II. In fact, half of his total goals (2) and assists (4) this season have come against Sporting, all after the halftime break:

Even with limited action during Wednesday’s affair at FC Tulsa after subbing on for Rece Buckmaster in the 63rd minute, Wild provided a spark in the final third tallying two shots, creating a chance and completing nearly 82% of his passes before the final whistle. If series history serves as any sort of indicator, a second-half surge from Wild could be the deciding factor in claiming three points against this weekend’s visitors.

The last time out against Sporting, Indy Eleven saw John Pulskamp stop five of its six shots on frame, frustrating the Boys in Blue throughout a 1-1 draw. With Pulskamp being called back into SKC’s MLS outfit in late August, that left McIntosh to man between the posts for a fourth stint during what has been a streaky 2021 season for the 27-year-old shot stopper:

September’s sample size is only one game to this point, but life couldn’t have been much easier for the Oakland native last weekend, when he didn’t need to make any saves en route to his third clean sheet of the season in a 3-0 win over OKC.

So will his good streak roll on this Saturday? Or will he suffer a similar fate during SKC’s first visit to the Circle City in May, when he bent but didn’t break until early in the second half of Indy’s 2-0 win? What he would appreciate is some goal support, as prior to last weekend’s win, SKC II had been outscored 13-5 when he was in net