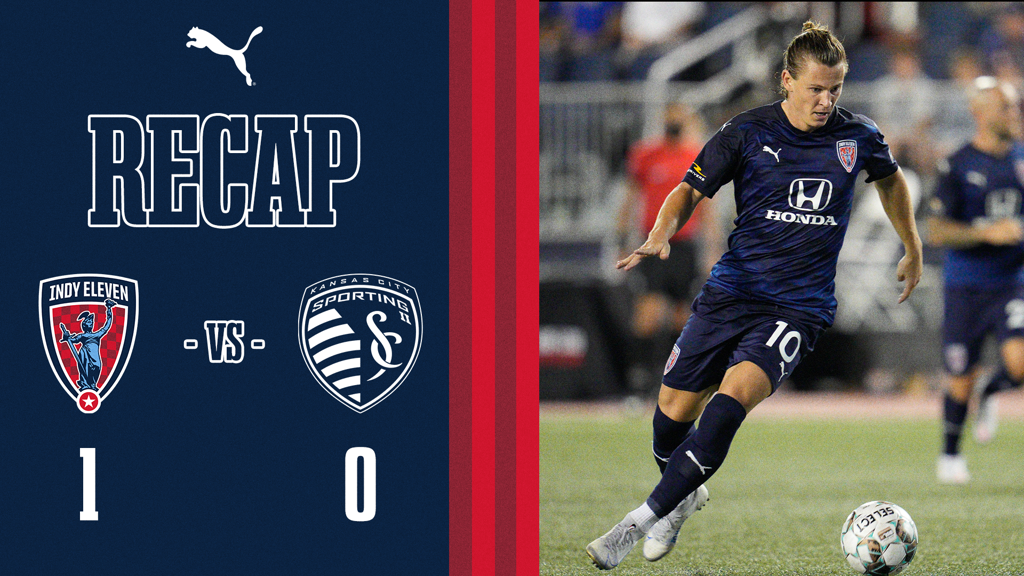 INDIANAPOLIS – Indy Eleven used a 77th minute goal by forward Gordon Wild and a fifth shutout of the season to post a vital 1-0 victory over Sporting Kansas City II this evening at Carroll Stadium.

The win put Indy Eleven (8W-10L-5D) back into playoff position in the crowded Central Division. While Indiana’s Team sits even with OKC Energy FC on 29 points, it currently holds the tiebreaker for the fourth and final spot via its advantage in two head-to-head meetings.

“At this stage of the season, it's about winning games no matter how you do," said Indy Eleven Interim Head Coach Max Rogers. "You want to be able to sort of play nice football and be entertaining, but it’s about winning in any way possible, really, and we did that tonight.”

The start of tonight’s match officially signaled a piece of club history, as center back and vice-captain Karl Ouimette earned his club-record 96th start in official competitions, breaking his deadlock with “Eleven Original” Brad Ring in the category.

The first half was one way traffic for the home side, which posted a 13-2 advantage in shots across the opening 45 minutes. Sporting KC II netminder Kendall McIntosh was credited with three saves in the half, his best coming in the 14th minute on Eleven forward Gordon Wild’s dipping half volley from the top of the area. McIntosh wasn’t credited for a save on what was likely his best stop in the 37th minute, when he acrobatically gathered SKC defender’s accidental backwards header of an Indy corner to the top of the six.

Wild continued to pile up the chances around the half hour mark, first spinning and firing just wide from 10 yards out before curling a thumping shot from 20 yards out that slammed off the underside of the crossbar before spinning away from danger. In the 42nd minute, Eleven striker Nicky Law’s tantalizing cross bounced through the six, but eluded both forward Manuel Arteaga’s touch to turn and defender Rece Buckmaster’s back post run, the chance marking the last of an entertaining but ultimately fruitless half for Indiana’s Team.

The second half started more evenly, but was still tilted towards the home side and still saw Wild instigating, his first-time volley near the hour mark from 15 yards sailing high but also serving notice. Law’s cheeky chip behind the defense in the 61st minute sprung Ayoze into the left side of the area, but his low far post effort was steered wide by McIntosh.

Rogers didn’t go to his bench until the 74th minute, but his insertion of Nick Moon and Carl Haworth nearly paid dividends immediately. In the 76th minute, Haworth’s effort from the top of the area that was set up by a perfect give-and-go with Law, missed wide of the right post by a foot. A minute later it was the other sub helping to finally move the scoreboard, as Moon slipped a cross from the right side of the area through two defenders to Wild, who turned and poked past McIntosh from seven yards out. The German striker’s eighth shot of the night – and fourth on target – finally hit paydirt, putting the Eleven deservedly in front 1-0 with just over ten minutes remaining.

The Eleven were able to gamely ride out the rest of the match, but not without Sporting getting one look on frame in the 80th minute, when defender Petar Cuic stepped up into the attack with a 20-yard shot that forced Eleven netminder Jordan Farr into his only save of the night. A minute later it was substitute striker Ropapa Mensah looking to equalize from near the spot, but his turn-and-fire chance was pushed just wide right of goal. Ultimately, Farr would earn his fourth clean sheet of the campaign, and his second across the Eleven’s last three home outings in recent weeks.

The Boys in Blue return to USL Championship play this Saturday, Sept. 18, with the first of two meetings inside a month against archrival and Central Division leader Louisville City FC (13W-5L-4D, 43 pts.; 1st in Central). Tickets for the 7:00 p.m. ET kickoff on “The World Comes to The Mike Night” are limited but still available and can be secured by visiting indyeleven.com/tickets or by calling 317-685-1100 during regular business hours. Fans who can’t make it Saturday can follow the action on WISH-TV, ESPN+, Exitos Radio 94.3 FM/exitos943.com, and the @IndyElevenLive Twitter feed.