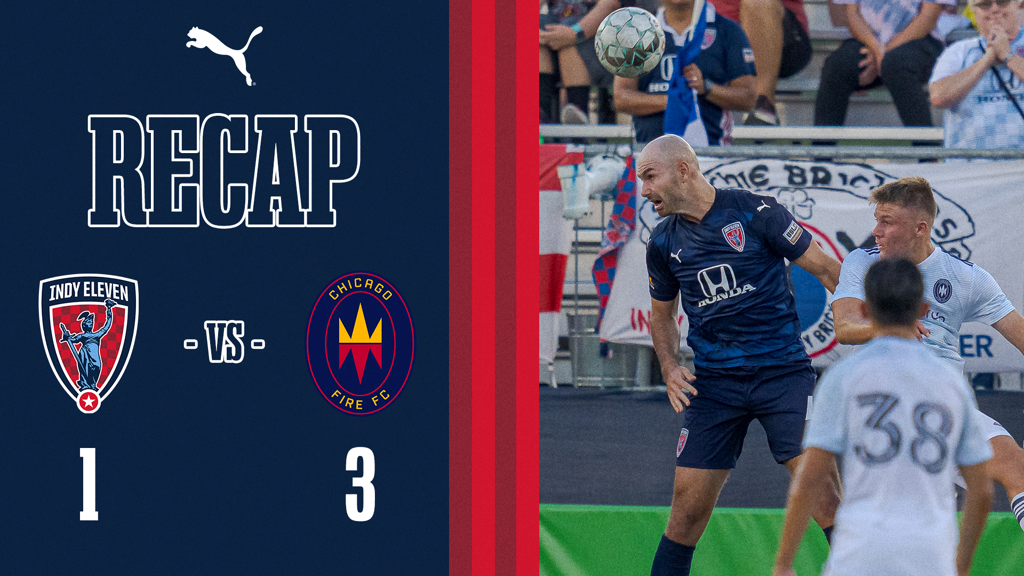 INDIANAPOLIS – Indy Eleven’s first in-season club friendly in five years’ time was spoiled by Chicago Fire FC, which registered a 3-1 victory over Indiana’s Team Tuesday evening at IUPUI’s Michael A. Carroll Stadium. Eleven forward Gordon Wild notched a late goal for the Eleven to continue his recent run of form, but it couldn’t offset a Fire FC attack fueled by Missael Rodriguez tallies on either side of the half.

An energetic Chicago side had possession in mind right off the bat, but the homestanding Eleven would even out the time on the ball within ten minutes. Chicago looked to notch one from distance in the ninth minute through Max Viera’s strike from 25 yards, but Eleven goalkeeper Bobby Edwards had little trouble cradling the chance.

In the 12th minute, Indy nearly got on the board through Manuel Arteaga, but the Venezuelan’s header off a cross by USL Academy signing Ecris Revolorio fell just wide of the near post. In the 22nd minute Eleven midfielder Nick Moon’s constant pressure down the right flank nearly paid off after beating a defender and squaring into the six, but another USL Academy product for the Eleven, midfielder Diego Sanchez, couldn’t square his feet in time to tap it in on the doorstep.

Chicago would get on the board in the 25th minute – but did so via a miscommunication on the Eleven backline. Newcomer defender Liam Doyle’s header inside the area skidded back and eluded Edwards after the goalkeeper came off his line, the ball eventually bouncing across the goalline to put the visitors on top.

Indy was energized after the concession and claimed more of the chances as halftime neared, starting with Aboubacar Sissoko’s 30-yard blast that missed just wide in the 33rd minute. Two minutes later it was USL Academy midfielder Alann Torres forcing a leaping save from Fire netminder Chris Brady, his two-handed parry stopping a curling effort from the corner of the area bound for the upper left corner of goal.

Indy would rue the missed chances as Chicago put one more past just before halftime. Forward Alex Monis’ work on the right endline paid off after his square ball to the six was redirected in traffic by Rodriguez, giving the Fire a 2-0 advantage heading into the interval.

Rodriguez would not be finished, as the Fire striker had space to shoot from 25 yards out and took it for all it was worth, slipping a shot just inside the left post and past a fully-extended Edwards to move the score to 3-0. Indy’s Torres nearly got it back within 90 seconds on a 2-v-2 break, but the USL Academy signing’s own far post effort bounced off the woodwork, continuing the home side’s frustration in front of goal. Two minutes later the Fire were also denied by the woodwork, as Max Viera’s shot from 20 yards slammed off the crossbar and spun away from danger.

Another shift change for the Eleven at the hour mark didn’t stem the tide immediately, as the Fire’s own substitute forward, Erik Kocs-Washburn, squandered a 64th minute 2-v-1 break by pushing his chance just wide left. Indy goalkeeper Alex Svetanoff was up to the task twice shortly thereafter, the USL Academy signing making a standout kick save to stop Kocs-Washburn’s shot across the six-yard box in the 66th minute.

Wild tried to take matters into his own hands on a 71st minute 1-v-1 break, ending his lengthy run from midfield with a shot that beat Brady but couldn’t sneak inside the far-right post. A few minutes later Eleven USL Academy League performer Ednilson Voiles danced into the area, but his low shot also missed just wide of the frame.

Similar to his eight-shot effort over the weekend against Sporting KC II, Wild continued his hunt for goal in the 84th minute, but his first-time effort off a short-hop just missed high from 12 yards out. The persistence paid off for the German three minutes from time, when Wild headed on Torres’ cross from the left flank inside the six to move the scoreboard to 3-1, where the match would finish despite continued attacking impetus from both sides right through to the final whistle.

Indy Eleven (8W-10L-5D, 29 pts.; 5th place in Central Division) returns to USL Championship play this Saturday, Sept. 18, with the first of two meetings inside a month against archrival and Central Division leader Louisville City FC (13W-5L-4D, 43 pts.). Tickets for the 7:00 p.m. ET kickoff on “The World Comes to The Mike Night” are limited but still available and can be secured by visiting indyeleven.com/tickets or by calling 317-685-1100 during regular business hours. Fans who can’t make it Saturday can follow the action on WISH-TV, ESPN+, Exitos Radio 94.3 FM/exitos943.com, and the @IndyElevenLive Twitter feed.