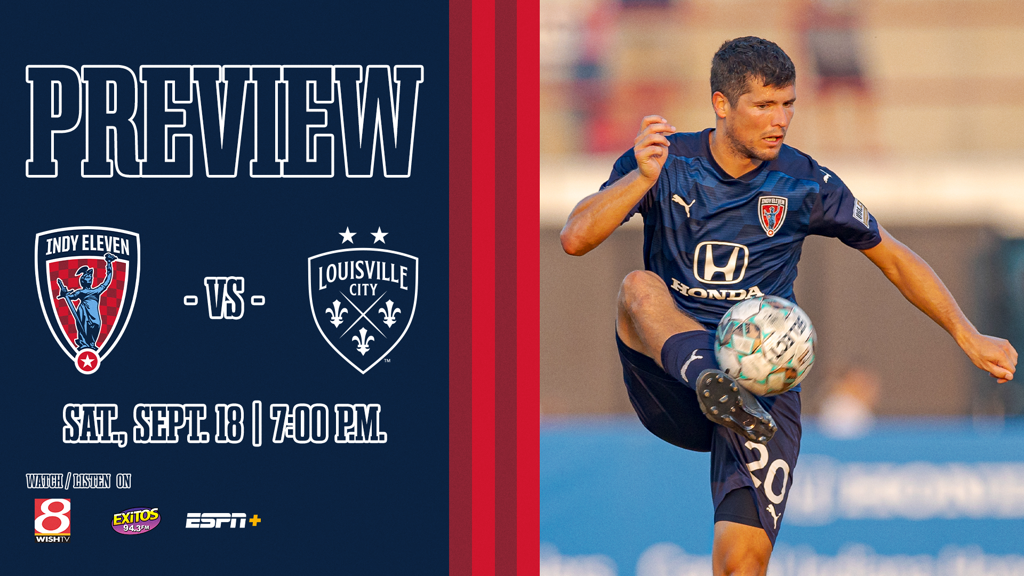 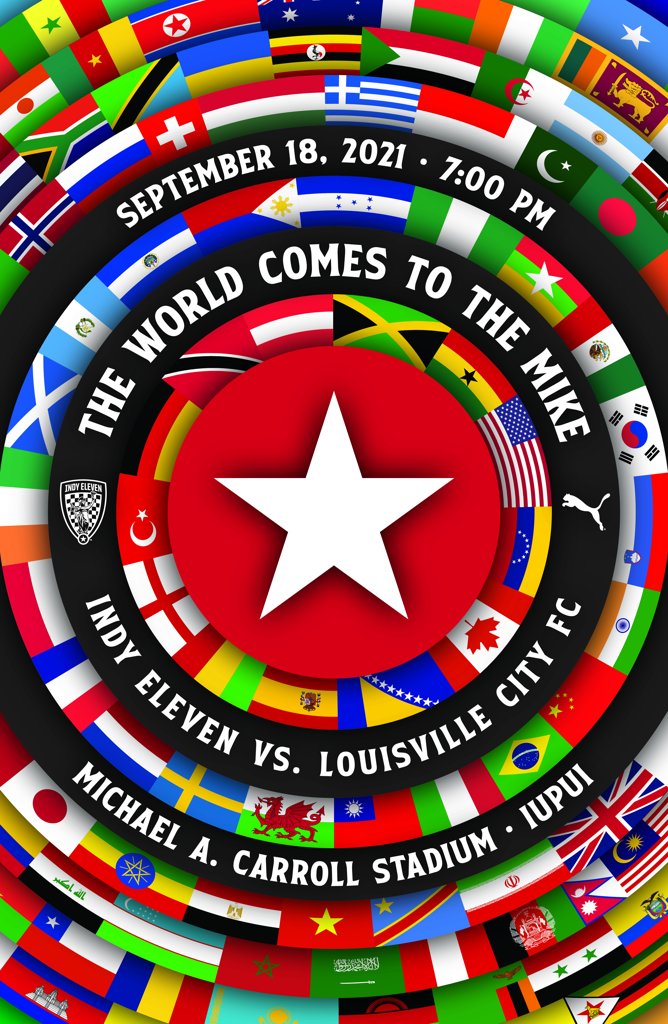 Be sure to pick your #INDvLOU poster up at the Customer Service tent on the West Concourse while they last! 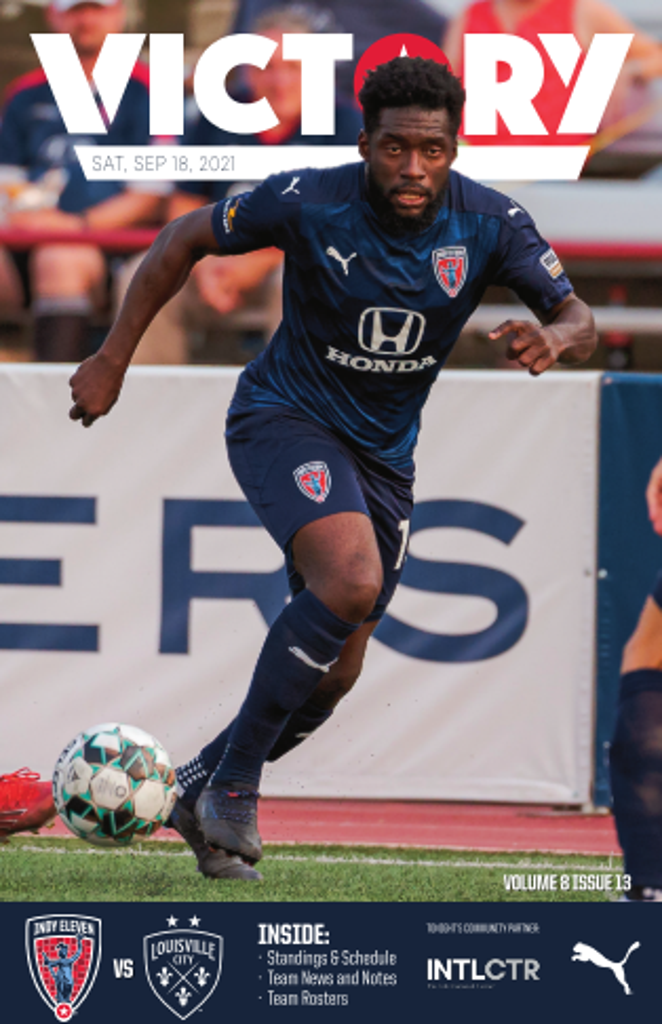 At long last, the most important rivalry in the USL Championship  human existence  the known universe returns to Indianapolis with Saturday’s renewal of <deep breath> THE LOUISVILLE-INDIANAPOLIS PROXIMITY ASSOCIATION FOOTBALL CONTEST. As is wont to happen with these two when they meet late in the season, the stakes are customarily high for both, albeit this go around they fall on different ends of spectrum when it comes to postseason outlooks.

Indy Eleven approaches Saturday having won three of its last four matches at home – and it has done so largely with an added emphasis on the defensive side of the ball, notching a pair of shutouts and allowing just two goals while scoring five in that span. While that’s a small sample set, it’s a definitive sign of progress from the first half of the season, when the Eleven were outscored 10-6 en route to posting a 1W-5L-2D record at “The Mike”.

For those of you expecting a redux of that 3-3 thriller in the last LIPAFC back in late June, well, you might just want to temper expectations and learn to appreciate soccer’s version of a “pitchers’ duel”. It turns out matches at Carroll Stadium have had the least amount of scoring on average in 2021 (along with OKC Energy’s Taft Stadium … insert power outage joke here), the combined teams’ totals from 12 games at the venerable venue clocking in at just under two goals per game (0.92 for Indy, an even 1.00 for the opposition). While Indy Eleven’s 33 goals allowed place near the middle of the pack of the Eastern Conference’s scoring defenses, if you take away the six-concession “Aberration in Atlanta” in August it would be even with LouCity’s 27 goals allowed, which sits at the fringe of the top five in the conference.

Speaking of defense, Indy’s team sheet for Saturday could be reinforced by the return of Patrick Seagrist, who is expected to be back in the mix for minutes as he returns from an injury that sidelined him for the last two contests. With center back A.J. Cochran still listed as out, don’t be surprised to find newcomer Liam Doyle on the 18-man roster, this after the San Antonio FC loanee got his feet wet with 60 minutes in Tuesday night’s friendly against the Chicago Fire. Meanwhile, the status of Peter-Lee Vassell remains up in the air, as the attacking option continues his efforts to return stateside following his recent call-up to the Jamaican National Team.

No offense to the four teams Indy has welcomed during its recent stretch of home success, but no one can argue they are in the same echelon as the Central Division leader. LouCity’s 45 goals make them the Eastern Conference’s highest-scoring squad, paced by perennial Golden Boot contender Cameron Lancaster’s 12 tallies and supported by Brian Ownby’s team-high eight assists and four goals, and five goals apiece from Kyle Grieg and Paolo DelPiccolo. Throw starlet left back Jonathan Gomez (three goals, six assists) and regular thorn-in-Indy’s-side Corben Bone (three goals, four assists), and you have arguably the most balanced attack in the USL Championship, one that will put the Eleven’s newfound super-stinginess at home to the test.

Saturday’s match marks the middle of a five-game road trip for the Kentuckians that began with an impressive 4-2 win under the glare of the national TV spotlight at Hartford Athletic last Tuesday and continued with a 1-1 draw at OKC Energy FC on Sunday. Those results look rosy on the outside, but they also came on the heels of consecutive losses at home to FC Tulsa (0-1) and at Birmingham Legion FC (1-2), defeats that snapped an eight-game undefeated streak and kept LCFC within arm’s reach of those two squads that continue to vie for the Central’s top spot.

After starting the season with seven of nine games at home, Louisville City is living out the imbalance down the stretch, finishing with 10 of 14 on the road. If there’s a bright side for the Eleven, it’s that LouCity is relatively mortal away from Lynn Family Stadium – their 4W-3L-3D and +3 goal differential (18 GF/15 GA) away splits paling in comparison to their devastating work at home (9-2-2, + 15 GD, 27 GF/12 GA).

Perhaps the biggest reason for optimism for the Indy faithful heading into Saturday is that the Boys in Blue have bucked any and all trends when it comes to facing LouCity in 2021. Of the four home games in which Louisville has dropped points at home, two were LIPAFC affairs – and memorable ones, at that. When the Eleven smashed-and-grabbed three points with a 2-1 win in May, it snapped Indy’s three-year winless streak in the series and sparked one of the Championship’s premier rivalries back to life. Only once has the Eleven put three goals on the scoreboard in 2021, so of course it would come on the road against one of the league’s most premier teams at home.

So while the above paragraphs lay out plenty of what you might expect when the LIPAFC renews on Saturday night, we probably could have saved plenty of time and words by simply saying this: just expect the unexpected and enjoy the ride of the rivalry.

It’s officially “late September”, which means we can be as blatant as we see fit about tracking playoff positioning! To that end, for this weekend’s preview we introduce a new section to help you keep track of who’s vying for that coveted fourth and final postseason spot from the Central Division ... and you can visit USLChampionship.com’s Scores page to keep track live once the games are underway.

As mentioned above, Indy Eleven has turned the LIPAFC series on its head a bit in 2021, starting with a 2-1 comeback win on May 22. In that one, now-departed striker Jordan Hamilton converted both of the Eleven’s shots on target into goals – including an 89th minute penalty that brought the full three points back north and gave Indy its first win in the series since their first USL Championship regular season affair on May 5, 2018. The second meeting at Lynn Family Stadium on June 26 was no less entertaining, starting with Cammy Smith (9’) and Neveal Hackshaw (20’) equalizing within the first 20 minutes and followed by Manuel Arteaga’s go-ahead goal just prior to halftime. However, Corben Bone’s 78th minute strike helped LCFC share the spoils from a 3-3 draw.

There shall be one more LIPAFC meeting down the stretch in 2021, as Indy hosts Louisville in its penultimate home match of the regular season on Saturday, Oct. 16.

Assuming everyone’s favorite Quebecois center back and beans aficionado sees the field on Saturday night, Ouimette will become just the third player in Indy Eleven history to reach 100 appearances in official competitions. His reinsertion into the starting XI after a brief spell from action a few weeks ago leads us to believe this will be the case, so allow us to give Monsieur Ouimette some preemptive félicitations on the occasion of joining Don Smart (100 caps) and Brad Ring (115) in the Eleven’s “Century Club”.

Milestones aside, Ouimette has played his usual solid role on the Eleven’s mostly three-man backline throughout the campaign, and he’ll need to do so once again on Saturday against one of the Championship’s most lethal offenses. Ouimette’s 56 clearances (3rd), 25 interceptions (4th), and 66 aerial duals/38 aerial duels won (both 3rd) are emblematic of his willingness to do the dirty necessary to keep opposing attackers at bay. While Ouimette has helped Indy find success by “mucking things up” at home as of late, don’t be surprised if vice-captain Karl happens to make an impact on offense as well … you might be surprised that he has eight goals under his belt during his 99 caps in the Circle City, including a pair on five shots in 2021.

If it seems like Ownby has been antagonizing Indiana’s Team forever, well, you’d be close, as the right wing mainstay has been an LIPAFC fixture since joining the Kentucky side in 2017. Ever since then he’s alternated between a “super sub” type and a starting XI regular – and this season he’s fulfilling both roles with his best production rate yet, as displayed by a career-high eight assists to go with four goals, and 31 key passes, and all of that coming in just 1,153 minutes of action (12 starts in 18 appearances).

After missing the opening LIPAFC game in May, Ownby made up for lost time in the June contest by terrorizing the Eleven on the right flank throughout the evening and helping set up two of LouCity’s three tallies. The relentless energy from the bald-domed forward seems to be spurred on even more in these LIPAFC affairs, so don’t be surprised to see Ownby in the middle of everything at The Mike on Saturday night.