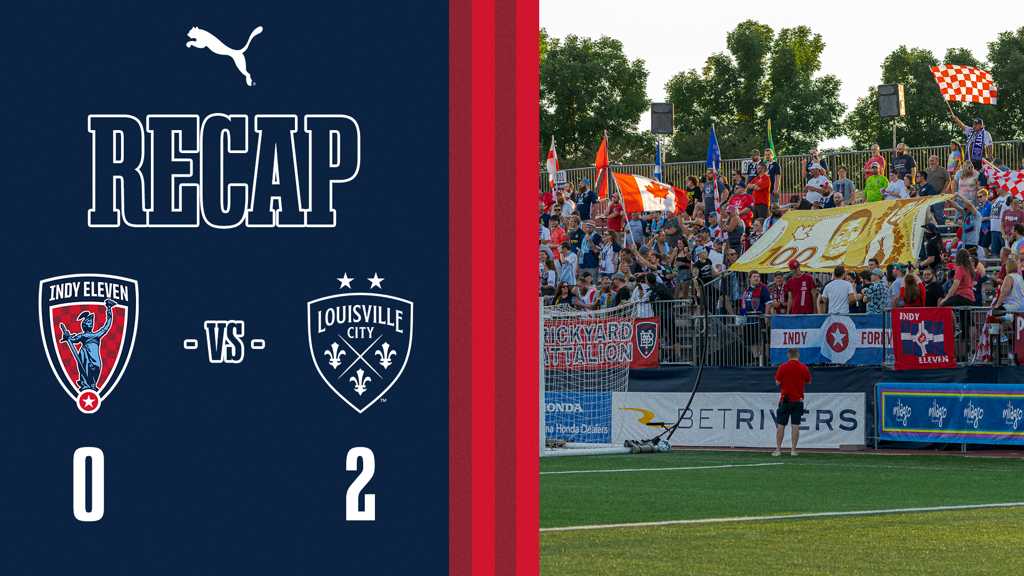 Other key contests from around the Central Division fell mostly in Indy Eleven’s favor, keeping the squad within one win of the fourth and final playoff berth from the division. Indiana’s Team remains even with Atlanta United 2 on 29 points, with both squads sitting just two points behind fourth place OKC Energy FC – which Indy Eleven will meet twice within four days’ time in the next week and a half.

In a scrappy opening half, Indy Eleven carried the bulk of the play and chances of note, but the sledding was tough for both sides, forward Gordon Wild’s 13th minute effort that forced a save out of LouCity netminder Chris Hubbard marking the only true moment of danger through the first 40 minutes of action.

However, Louisville City woke up down the stretch, and used a counter against the run of play to go up in the 41st minute. It was a familiar Indy antagonist in Hoppenot doing the damage, as the LouCity winger ran onto Jorge Gonzalez’s through ball up the middle as well as Karl Ouimette’s sliding challenge before lunging to poke the ball past an onrushing Jordan Farr to move the scoreboard first. Hoppenot nearly created a second for the visitors in the first minute of stoppage time by flicking on a cross to the six for Cameron Lancaster, but the Englishman’s shot was blocked by Eleven defender Jared Timmer, stemming the tide and getting Indiana’s Team into the break down just one.

The Eleven fired the first shot across the bow of the second stanza in the 50th minute, midfielder Gershon Koffie’s 20-yard blast forcing Hubbard into a two-handed parry wide of his frame. However, that would be the only shot for the home side for the duration of the match, and Louisville all but sealed the result in the 69th minute through Hoppenot again. This time the pesky winger did it with service from the left flank for Cameron Lancaster, whose looping header from eight yards out beat a leaping Farr to double the Louisville’s advantage.

Outside of Brian Ownby’s rising shot from 20 yards out in the 82nd minute and Farr forcing Gonzalez to push a low shot wide of the near post in the final minute of regulation, neither side provided much danger towards goal, the Central Division leaders expertly seeing the result out as the second half expired.

The Boys in Blue will take to the road for three straight games against teams it is vying against for a postseason berth, starting with a midweek match-up at Memphis 901 FC. Kickoff from AutoZone Park in Memphis is slated for 8:00 p.m. ET for a match fans can watch live on MyINDY-TV 23 and ESPN+, as well as follow online via the >@IndyElevenLive Twitter feed, presented by Central Indiana Honda Dealers.

After back-to-back roadies at OKC Energy FC on Sept. 26 & 29, Indy Eleven will return to Carroll Stadium on Saturday, Oct. 2, with its fourth and final meeting of the campaign against another postseason hopeful, Atlanta United 2. Tickets for the 7:00 p.m. ET kickoff on the club’s annual Hispanic Heritage Night, presented by Financial Center First Credit Union and Morales Group, can be secured by visiting indyeleven.com/tickets or by calling 317-685-1100 during regular business hours.