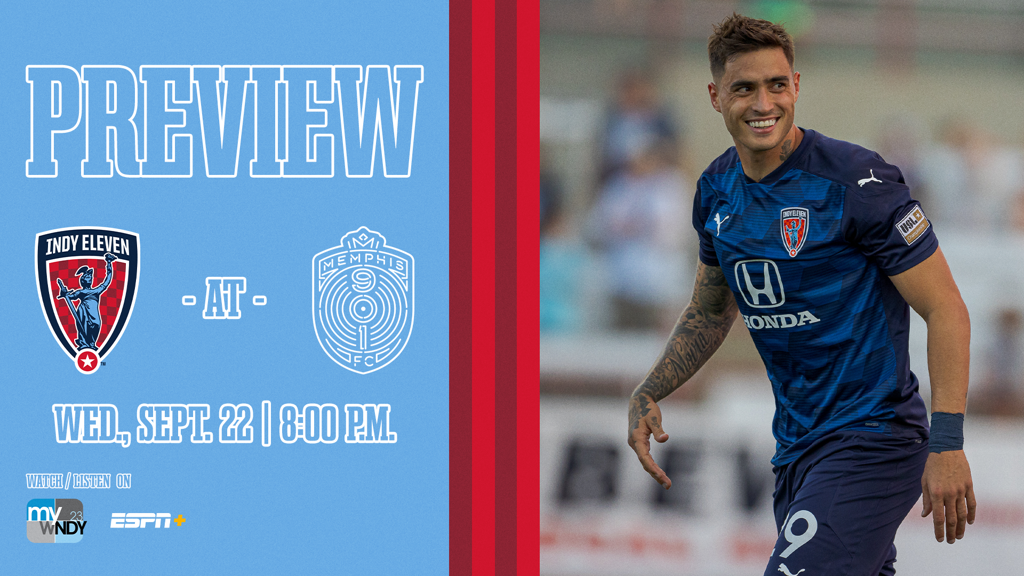 The next fortnight is officially “go time” for Indy Eleven when it comes to securing a postseason berth, as four consecutive “six-pointers” against fellow playoff hopefuls in an 11-day span begins Wednesday night at Memphis 901 FC. The way the games in hand work out at the moment, a win for either team on Wednesday puts them in the driver’s seat for the fourth and final playoff position, while a draw will make an already air-tight race between Indy, Memphis, OKC Energy FC & Atlanta United 2 even closer, putting the quartet all within two points at season’s three-quarter pole.

After dropping a 0-2 result at home to division-leading Louisville City FC on Saturday night, Indy Eleven watched Memphis mosey up right behind it on the Central table on Sunday courtesy of a 3-0 matinee win at New York Red Bulls II. After a closer look at some of the most basic splits of their season stats, it’s no surprise a singular point separates the two squads ...

So on the surface, we’re looking at similar sides ... but the difference lies in their approach on the ball. Indy relishes possession, an approach confirmed by its seventh-place status across the Championship in both total passes and passing percentage (80%). On the flip side, Memphis is one of the league’s least pass-happy squads, ranking last in total passes (despite having the least games played, their per game average still ranks in the bottom three) and tied for the third-lowest passing accuracy (76%).

Their two meetings at Carroll Stadium over the summer followed those patterns to a T, although Memphis proved more adept in making possession difficult for the Eleven in the closer of the two affairs, a 1-1 draw on July 17. However, the clash in styles saw no difference in the creation of chances, as Indy notched 27 shots across the two meetings (9 shots on goal) and Memphis 31 (10 on target).

And making things happen towards goal will be focus number one for the Boys in Blue, who were held to just five shots against Louisville – and none after the 50th minute, as LouCity expertly sat on the match and made life difficult for the Eleven in attack. The biggest factor was Louisville’s ability to hold Indy’s leading scorer – and the league’s second-leading shot taker – Manuel Arteaga without a single shot and only two touches inside the penalty area. It will be pivotal for Indy to get more figurative arrows into the quiver of el arquero (or, literally, more balls to the feet of “the archer”) if they want to manufacture scoring down the stretch drive.

Indy Eleven will look to continue its success in the Bluff City, where it posted decisive wins in both 2019 (3-0) and the 2020 season opener last March 7, when Indiana’s Team stormed back from an early 2-0 deficit to notch a 4-2 win that set club records for goals in a road game and the largest deficit overcome in a victory.

Memphis has made up ground in the all-time series through this year’s two meetings in Indianapolis, starting with a 2-1 win on June 5 that saw first half goals by Michael Salazar (3’) and Kyle Murphy (35’) prove enough to stave off an Eleven comeback bid that included Karl Ouimette’s tally deep in second half stoppage time. On July 17, the squads settled for a share of the spoils out of a 1-1 draw at Carroll Stadium, Nick Moon (47’) and Salazar (51’) canceling each other out to start the second half.

Indy and Memphis will close out their respective 2021 regular seasons with a potentially intriguing finale back at AutoZone Park on Saturday, October 30.

As mentioned above, Arteaga endured perhaps his most frustrating 90 minutes of the season last weekend against Louisville. That makes this “bounce back” opportunity for the Venezuelan talisman all the more important for an Eleven side that has struggled to score as of late, the squad notching just two goals in its last four outings.

That said, Arteaga registered one of those two goals in the Eleven’s last road contest at FC Tulsa on Sept. 8, a 1-2 defeat that was poised to earn a point if not for a late-game penalty concession. Arteaga’s seven goals are more than double than any other active roster member in 2021, while his 57 shots represent 21% of the team’s total.

Take Arteaga’s importance in the Eleven attack – and then double it. That’s how much Memphis leans on Murphy, who has tallied 14 of 901 FC’s 24 goals this season. Yes, you read that correctly ... the journeyman striker is the Championship’s human embodiment of a linchpin having scored 58% of his team’s goals.

Some may call that a recipe for disaster, but so far it’s working enough to put Memphis on a playoff pace. The former Clemson Tiger continued the script on Sunday, scoring two of Memphis’ goals in their 3-0 away win at NY Red Bulls II. Those marks snapped a four-game scoreless streak for the 28-year-old striker, who will again look to put Memphis on his back on their march towards the postseason.