INDIANAPOLIS – Indy Eleven added a well-known commodity in USL Championship circles for the stretch drive of its 2021 regular season campaign with today’s signing of former league Most Valuable Player Emmanuel Ledesma. Terms of the deal that brings the Argentinean playmaker to the Circle City will not be released, per club policy.

The 33-year-old attacking midfielder is currently completing the paperwork process for entry into the United States and is expected to join Indiana’s Team as early as next week. The native of Quilmes, Argentina, brings a wealth of experience to Indy Eleven after playing 13 seasons across Europe and the Americas, during which he tallied 61 goals and 50 assists in 277 professional league and cup matches.

“To receive a player the quality of Emmanuel Ledesma at this point in our season signifies we still have every expectation to not only reach, but to succeed in the USL Championship Playoffs,” said Indy Eleven Interim Head Coach Max Rogers. “Emmanuel has proven that he can be a special performer in this league, and we look forward to his contributions in the coming weeks as we aim to reward our fans with a postseason berth.”

After rising through the youth ranks at Serie A side Genoa, Ledesma spent most of his first three seasons in Italy (Salernitana, Novara Calcio & Cortone); however, he made his professional first team debut in 2008 while on loan to English Championship side Queens Park Rangers. After two stints with Walsall in England’s League One and a brief return home to Argentina to his boyhood club of Defensa y Justicia, Ledesma returned to the English second flight for five seasons in the Championship from 2010-16 with Middlesborough, Rotherham United (twice), Brighton Hove & Albion, and Brentford. 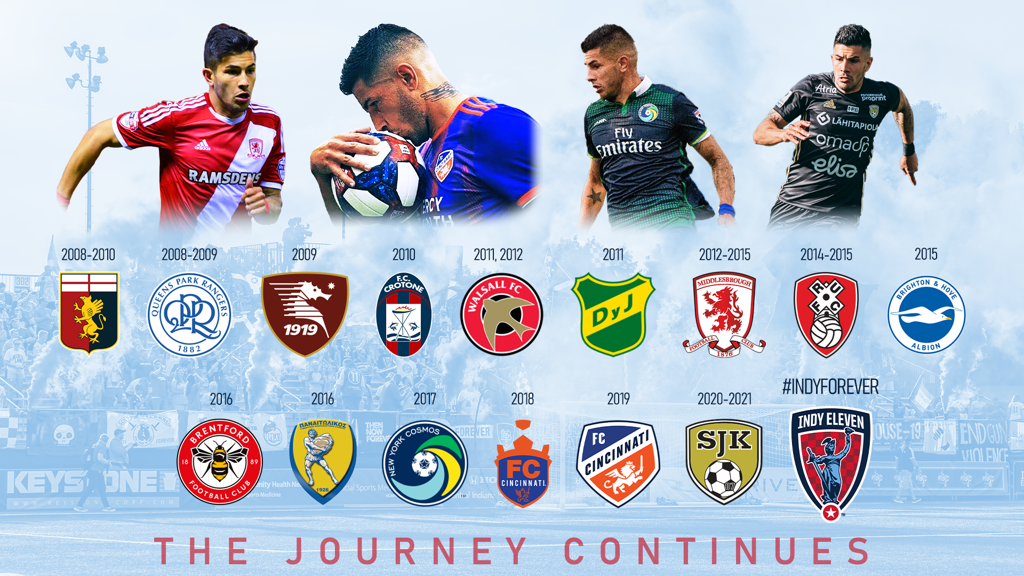 A short stint with Greek Super Club side Panetolikos preceded Ledesma’s first trek to the United States to join the NASL’s New York Cosmos in 2017, when he bagged 10 goals in 21 contests playing alongside his new Eleven teammate and captain Ayoze. Ledesma dazzled with FC Cincinnati during his USL Championship MVP campaign in 2018, scoring 16 goals to go along with a then league record 16 assists in helping FCC to another Championship record of 77 points from regular season play. After he stayed with Cincinnati for its inaugural season in Major League Soccer in 2019, Ledesma spent the last two years in the Finnish First Division (Veikkausliiga) with SJK (Seinäjoen Jalkapallokerho) before returning stateside with Indy Eleven.

Ledesma’s addition brings the active Indy Eleven (8W-11L-5D, 29 pts., 6th place in Central Division) roster to 27 players as the club enters the final quarter of its 2021 regular season slate, which begins tonight with a crucial away affair at Memphis 901 FC (7W-8L-7D, 28 pts., 7th in Central). Kickoff from AutoZone Park in Memphis is set for 8:00 p.m. ET for a contest fans can watch live on MyINDY-TV 23 and ESPN+ and track online via the @IndyElevenLive Twitter feed, presented by Central Indiana Honda Dealers.