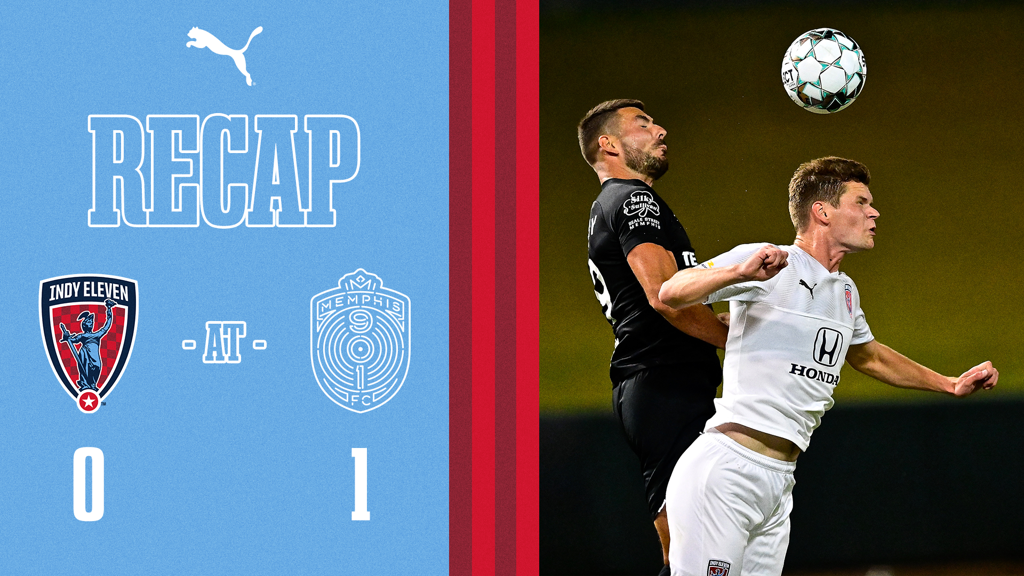 MEMPHIS, TENN. – Indy Eleven suffered a frustrating 1-0 loss on the road at Memphis 901 FC Wednesday evening. A lack of shots from each side ultimately saw 901 FC’s Kyle Murphy score the first half game-winner after an unfortunate deflection sent the ball skipping into Indy’s net.

Wednesday’s loss saw Indiana’s Team drop to seventh on the Central Division table, but another key midweek result kept Indy with arm’s reach of a postseason berth. Atlanta United 2 (6th) dropped points in a 4-0 loss in its Wednesday night fixture against Birmingham Legion FC (2nd), the result keeping Indy within a win for a three-way tie with Memphis (31 pts.) and OKC Energy FC (31 pts.) for the coveted fourth place position in the increasingly crowded division.

Both teams had bouts of pressure in the first 45 minutes of play, but neither side could muster much in terms of goal scoring opportunities. Indiana’s Team found its first and only chance of note of the half in the 10th minute, when a pair of passes from forwards Gordon Wild and Manuel Arteaga moved the ball across the top of Memphis’ 18 to an open pocket towards the left of the box. Nicky Law’s run into the penalty area pulled Memphis’ back line far away enough to give Ayoze a clear shot as he darted in from the flank, his low strike forcing 901 FC goalkeeper Cody Cropper into a diving save.

Nineteen minutes eclipsed before Eleven goalkeeper Jordan Farr was tested, his first bit of action keeping the sheet clean after Memphis midfielder Alan Winn’s cross into the six took a hard bounce off the inside of Indy defender Neveal Hackshaw’s boot and towards goal. The proceedings took a turn for the worse for Indy two minutes later in the 31st minute, when a loose ball went bouncing towards the top of Farr’s box with Murphy in tow. Hackshaw and fellow defender Karl Ouimette crowded in front of the forward while the ‘keeper attempted to clear the danger, but Farr’s clearance ricocheted off Murphy’s hip and quickly hopped towards goal for what would end up being the lone goal of the evening.

Memphis had its first and only true shot on goal of the first half in the 45th minute, Mark Segbers finding Dre Fortune in the top-right of the penalty area through a swarm of Eleven players for an attempt at the near post, a hit that Farr palmed back into the box for a clearance. Despite outshooting the hosts 5-4 and holding over 64% possession, Indy Eleven trailed by one heading into the break.

There was only one chance on goal throughout the second stanza for either team, this time favoring 901 FC. In the 48th minute, Winn dribbled his was through the left wing for a shot within the 18 to the near post, forcing Farr to jump off his line for the save. Indy continued to play a stout possession game throughout the second half having retained the ball for 63% percent of the remaining time, but that wasn’t enough for the Boys in Blue to salvage a point on the road.

Indy attempted to bring in a jolt of energy near the end of the evening with several late game substitutions, including a USL Championship debut for 17-year-old USL Academy signing Alann Torres, but the night eventually ended after eight minutes of stoppage time ticked away at AutoZone Park.

The Boys in Blue will continue their stretch of away games in the first matchup of a doubleheader at OKC Energy FC this Sunday, September 26. Kickoff from Taft Stadium is slated for 6:00 p.m. ET for a match fans can watch live on ESPN+, as well as follow online via the @IndyElevenLive Twitter feed, presented by Central Indiana Honda Dealers. Those same details can be followed to track the two sides’ 2021 series finale next Wednesday, Sept. 29, this time kicking off in Oklahoma City at 8:30 p.m. ET.

Indy Eleven will return to Carroll Stadium on Saturday, Oct. 2, with its fourth and final meeting of the campaign against another postseason hopeful, Atlanta United 2. Tickets for the 7:00 p.m. ET kickoff on the club’s annual Hispanic Heritage Night, presented by Financial Center First Credit Union and Morales Group, can be secured by visiting indyeleven.com/tickets or by calling 317-685-1100 during regular business hours.