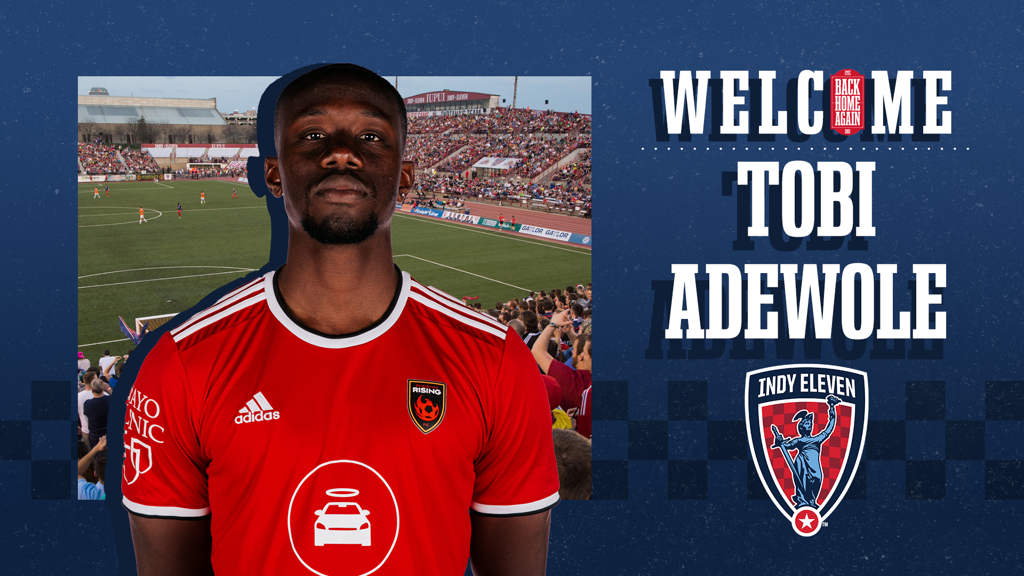 INDIANAPOLIS – Indy Eleven made one final addition to its squad prior to today’s USL Championship roster freeze deadline with the signing of defender Tobi Adewole.

Per club policy, terms of the deal that brings the five-year veteran of the Championship to Indianapolis for the stretch drive of the 2021 regular season will not be released. Adewole is expected to join Indy Eleven in Oklahoma City in advance of its upcoming games against OKC Energy FC on Sunday and Wednesday, but his availability for those contests will be pending league and federation approval.

“Having worked with Tobi Adewole last season in Saint Louis, I am confident he can immediately provide quality production on our backline,” said Indy Eleven Interim Head Coach Max Rogers. “The additions of Tobi, Emmanuel Ledesma, and Kevin Partida in recent days should be a clear signal that the intention to not only reach, but succeed, in the postseason remains our squad’s only expectation this season. We embrace the challenge and look forward to Tobi’s role in achieving that success through the rest of the 2021 season.”

The 25-year-old Adewole is already in his fifth professional campaign, all spent in the USL Championship between Pittsburgh Riverhounds SC (2017-19), Saint Louis FC (2020), and Phoenix Rising FC (2021). The native of Cheverly, Maryland, has scored three goals across 100 appearances in regular season (91), postseason (4), and Lamar Hunt U.S. Open Cup (5) action.

The product of George Washington University started seven of Phoenix’s first 11 games this season and appeared off the bench in two more contests. Prior to 2021, Adewole helped Saint Louis and Pittsburgh to USL Championship Playoff berths in each of the last three years. His signing brings Indy Eleven’s roster to 28 players for the remainder of the 2021 campaign; visit indyeleven.com/2021-roster for more on the Boys in Blue.

Indy Eleven continues its pivotal three-game road trip against Central Division playoff contenders this Sunday, Sept. 26, with the first of back-to-back games at OKC Energy FC. Kickoff for Sunday’s contest at Taft Stadium in Oklahoma City is scheduled for 6:00 p.m. ET (live on ESPN+), which will be followed by a repeat performance three days later next Wednesday, Sept. 29 (8:30 p.m. ET kickoff, ESPN+).