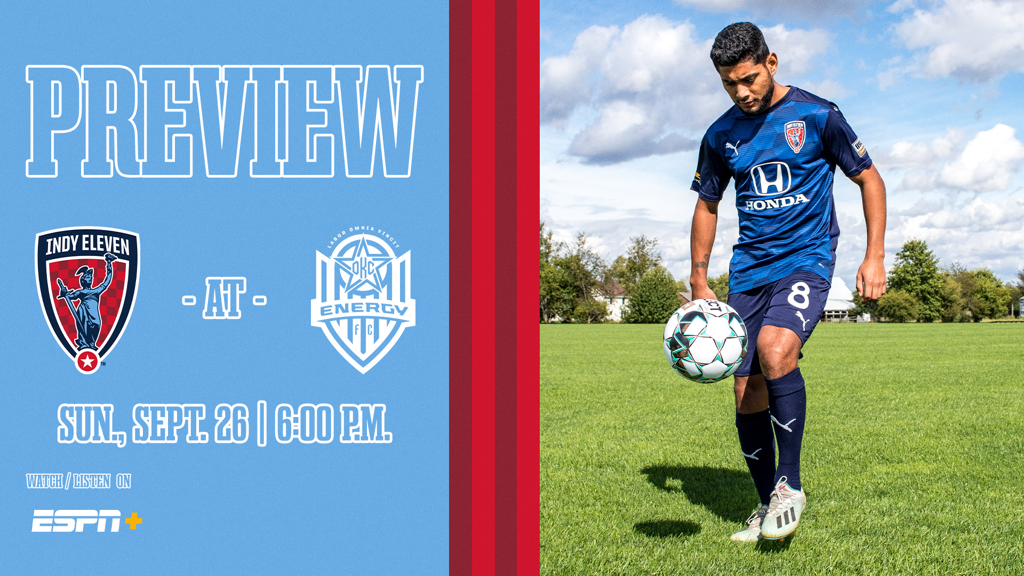 Indy Eleven’s three-game road gauntlet against fellow playoff contenders continues this weekend with the first of back-to-back bashes in Oklahoma City on Sunday. Energy FC currently has possession of the fourth and final playoff spot in the Central Division, but the coveted slot continues to be passed around like a hot potato between Indy, OKC, Atlanta United 2, and Memphis 901 FC. That means a potential win for Indy would see it leap Energy FC on the Central table, but it may still not be enough to put the Boys in Blue in the driver’s seat at the conclusion of Week 23 play.

A couple of those Boys in Blue are brand new, and between the team’s mounting injury woes and a starting XI that has logged heavy minutes in the last week, it wouldn’t be a surprise to see central midfielder Kevin Partida see the field come Sunday evening. The more interesting play could be Hackshaw’s 2020 All-League Second Teammate Partida, the ex-Reno 1868 FC standout who showed enough on trial at Grand Park in recent weeks to overcome any lingering concerns from an injury that saw him sidelined for much of the 2021 campaign.

That said, the primary focus for Indy will be trying to jumpstart things in the attacking third. Indiana’s Team could muster only five shots against 901 FC on the patchy AutoZone Park turf Wednesday night – and only one after the squad fell into its 0-1 hole shortly after the half hour mark. While the conditions of the Taft Stadium pitch will certainly be more reliable, the numbers dictate the prognosis for goals will only be tougher as the venue has produced the least amount of combined goals per game at 1.917 (practically even with Carroll Stadium, clocking in right behind at 1.923).

With a 3W-3L-6D record at home, that means, by default, scoring at Taft Stadium has been equally as confounding for OKC Energy FC, which has only outscored its opposition at home by a 12-11 margin. However, after a rough 0W-3L-2D start (4 GF/8 GA) at Taft, OKC has rebounded to go undefeated in its last seven outings there, their eight tallies and stingy three concessions in that stretch yielding a 3W-0L-4D haul since late June.

OKC enters Sunday on full rest coming off a sturdy 1-1 draw at Birmingham Legion FC last Saturday evening. In that one, Villyan Bijev got Energy FC out to a lead late in the first half, only to see Mikey Lopez equalize in the 55th minute. From there, OKC held off Birmingham’s 14-shot second half barrage to bring a well-earned point back west.

USL Championship on the road: n/a

OKC Energy FC’s move to the Eastern Conference for the 2021 USL Championship campaign meant the start of a new series for Indiana’s Team (along with OKC’s Sooner State mate at FC Tulsa). The squads began their ledger at Carroll Stadium on June 2, when Nick Moon’s finish off a Gordon Wild corner late in the first half was cancelled out by Frank Lopez’s redirect in the 69th minute, resulting in a 1-1 draw.

The two teams tried to renew acquaintances in Oklahoma City on July 10, only to see the game halted at 1-1 early in the second half, and ultimately abandoned due to stormy weather and a subsequent power outage at Taft Stadium. The Central Division foes circled back to the Circle City on August 14, when Manuel Arteaga assisted on Nicky Law’s 26th minute opener before the pair reversed roles on Arteaga’s 53rd minute game-winner in a 2-1 Indy triumph.

With the postponed July away date moved next Wednesday, Sept. 29, that means Indiana’s Team and Energy FC will close out their 2021 series with two games in four days’ time at Taft Stadium.

Though his name was just added to the roster Thursday afternoon, new arrival Partida could be primed to hit the ground running this Sunday at Taft Stadium. With the injury bug still plaguing the Boys in Blue, the importance of the 26-year-old (as well as other recent additions to Indiana’s Team) will be highlighted in the fight for a playoff berth in the Central Division.

Partida has only been with the squad for a little over a week, spending the first handful of days trialing before completing his transfer to the Hoosier State, but he doesn’t arrive without proven USL Championship credentials. The Sparks, Nevada-native helped lead former USLC heavyweights Reno 1868 FC to the top seed of the league’s 2020 postseason, advancing as far as the Western Conference Semifinals before falling to Phoenix Rising FC. His 17 key passes, one assist, and four goals – two of which came in Reno’s pair of postseason contests – helped earn Partida a spot on the USL Championship’s All-League Second Team and ultimately a move to Major League Soccer’s Minnesota United FC at the end of the season. Though he hasn’t seen any playtime in 2021, his offensive awareness will be called upon as Indy seeks an uptick in goal production through the final weeks of the regular season.

Don’t let his 26 goals conceded fool you – Cochran has been a major reason for OKC Energy’s ascension up the Central Division table, currently holding the fourth and final playoff position on a head-to-head tiebreaker with Memphis 901 FC. The 30-year-old is among the top of the list in the Eastern Conference’s goalkeeping statistics, currently fourth in saves (69) and second in clean sheets (7).

Since falling 2-1 at Carroll Stadium on August 14, Energy FC have recorded 2W-1L-2D with five goals for and six goals against, half of those concessions in the stretch coming from the lone 3-0 loss at Sporting Kansas City II on September 4. With two clean sheets in that mix and single-goal concessions in three of the last six outings, Indy will need to quickly breakdown Cochran’s dominance in goal in order to walk away with three points Sunday evening.