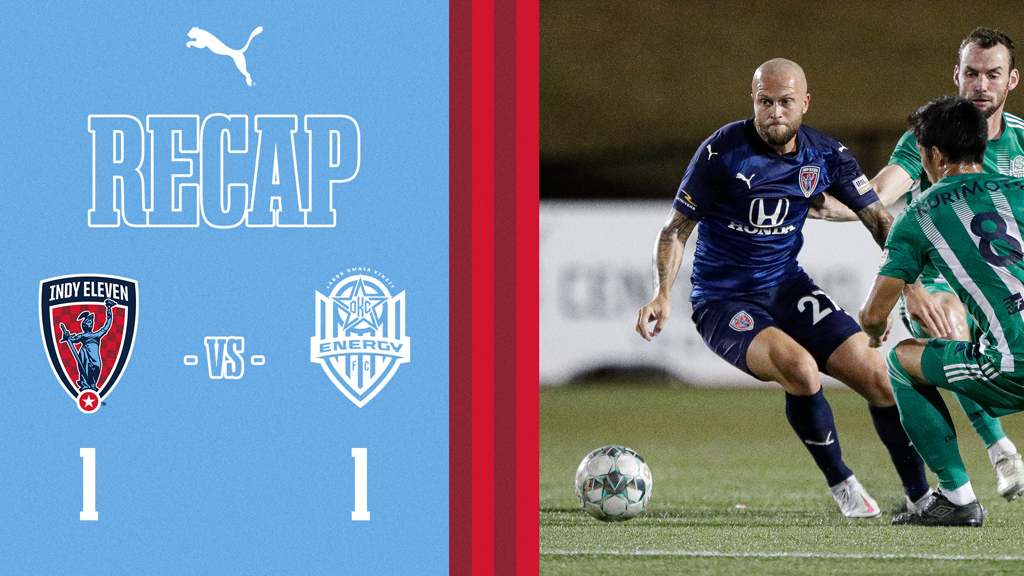 OKLAHOMA CITY – Indy Eleven claimed a vital point on the road tonight at Taft Stadium, as forward Manuel Arteaga’s early goal helped earn a 1-1 draw at OKC Energy FC in a Central Division clash with playoff implications all over it.

The result allowed Indy Eleven (8W-13L-6D, 30 pts.) to stay within arm’s reach of Energy FC (8-8-11, 35 pts.), which maintained its five-point grip on the Central’s fourth and final playoff berth over both the Eleven and Atlanta United 2, which also drew 1-1 at home tonight against division leading Louisville City FC. Memphis 901 FC remains wedged in between in fifth place on 32 points heading into a hectic full weekend of action for the playoff hopefuls.

"I’m really proud of the players’ efforts this evening. I thought they worked really hard and showed good tactical organization and things that maybe don’t come across on the television, they followed exactly what we were after," said Indy Eleven Interim Head Coach Max Rogers. "The good thing is that now we have a goal, we stopped a run of defeats and we’ve got five games with no more midweek games. We can prepare and attack these last five games.”

With Indy playing its fourth match in 12 days and in need of fresh legs, Rogers made four changes to the starting XI in an effort to insert much needed fresh legs. The quartet included two of last week’s three new roster signings – defender Tobi Adewole and midfielder Kevin Partida – and midfielder Alann Torres, the 17-year-old Elkhart native who made his professional debut off the bench in Sunday evening’s “round one” of the Eleven’s doubleheader in Oklahoma City.

After coming off the bench to score OKC’s second goal on Sunday night, Energy FC striker Aiden Daniels signaled his intentions from the start this evening, his 20-yard effort bouncing off the left post and away from goal in the fifth minute.

The fourth of Indy’s starting lineup changes was the reinsertion of Ayoze, and the captain made his presence felt early and often, starting with the game’s opening goal in the 12th minute. Manning the left flank 30 yards from the endline, Ayoze put his defender on skates to gain a yard of space before snapping off a cross to the six-yard box. Arteaga met the pacy pass with a lunging header, steering it into the lower right corner to give Indy the lead on its first true chance of the match. The play gave the Venezuelan striker his team-high eighth goal of the season, while Ayoze’s third assist of the campaign boosted his club record in the category to nineteen. Another service from the Spaniard five minutes later nearly paid off as well, but Torres couldn’t beat his mark to the well-driven ball to the six.

The Energy FC attack had little more to show until the 34th minute, when Villyan Bijev’s dipping blast from 20 yards flew just over the crossbar. Six minutes later it was Bijev looking to finish a swift OKC counter, but a backtracking Indy defender clipped the chance off the Bulgarian’s foot, allowing it to dribble weakly to Eleven ‘keeper Bobby Edwards for collection. The half’s final minute of regulation saw Sunday’s other Energy FC goal scorer, Jaime Chavez, nearly equalize, but he pushed his header off Yuki Kurimoto’s looping cross just wide of the left post, sending Indy into the interval with the 1-0 advantage.

It was Chavez looking dangerous again six minutes into the second stanza, his attempt whistling just over the bar. Partida would exit the match after a dutiful shift in the 63rd minute, and his replacement in midfield, Aboubacar Sissoko, would make a key play just seconds after entering via a close-range block of Lamar Batista’s volleyed rocket.

After playing provider all night Ayoze took his try at finishing in the 67th minute, but after beating a man inside the area his shot from eight yards was stopped by a fine reaction save by OKC goaltender CJ Cochran on his line. The 80th minute saw Arteaga’s hustle pay off with a point to the penalty spot, as he was pulled down by Mitch Osmond inside the area seconds after stripping the ex-Eleven defender of the ball. Arteaga would take the chance himself and tried to pick out the same lower right corner that paid dividends in the first half, but Cochran was up to the task with a diving, two-handed save to keep OKC’s deficit at one.

Indy’s defense more than held its own as the half progressed, holding Energy FC without a shot for 20 minutes following Batista’s earlier blocked effort. However, the home side would get its equalizer in the 87th minute on a delivery and finish remarkably similar to Indy’s opener, Seyi Adekoya rising to meet Arun Basuljevic’s cross from the right flank. Indy garnered the best chance deep into the eight minutes of stoppage time when defender Liam Doyle’s header from the six had eyes for the right post, but Cochran was there again to make the tense evening’s final save.

Indy Eleven will return to Carroll Stadium this Saturday, Oct. 2, with its final of four 2021 meetings against fellow postseason contender Atlanta United 2. Tickets for the 7:00 p.m. ET kickoff on the club’s annual Hispanic Heritage Night, presented by Financial Center First Credit Union and Morales Group, can be secured by visiting indyeleven.com/tickets or by calling 317-685-1100 during regular business hours.

Fans who cannot make it to “The Mike” can watch live on MyINDY-TV 23 and ESPN+, listen on Exitos Radio 94.3 FM & exitos943.com, and follow online via the @IndyElevenLive Twitter feed, presented by Central Indiana Honda Dealers.