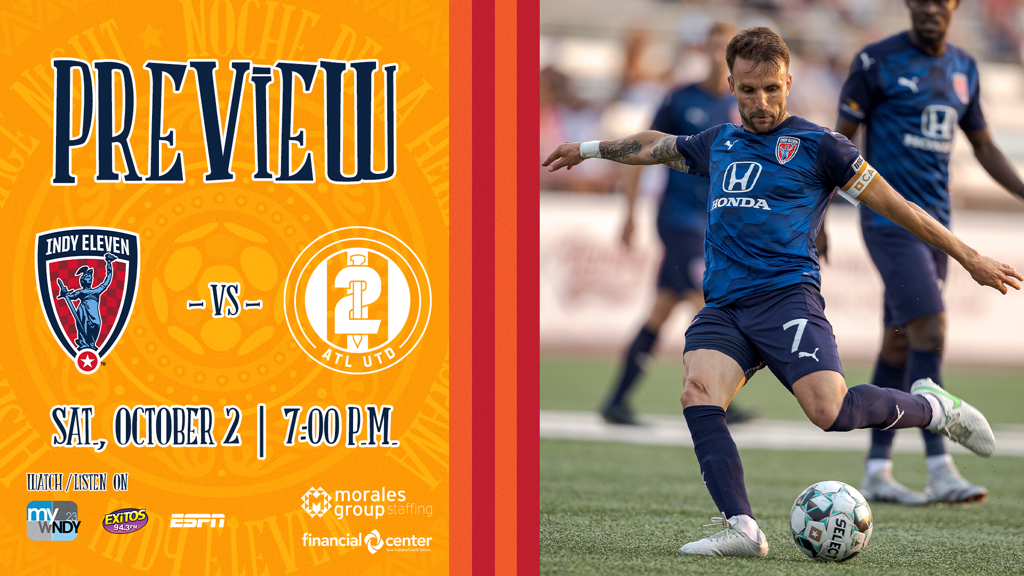 While the math dictates Saturday’s season series finale between Indy and Atlanta is not a “do-or-die” affair for both sides’ playoff chances, for all intents and purposes it is exactly that. With the amount of games to be played dwindling (five for Indy, four for ATL), neither side can afford missing the chance to make up ground on the five-point gap they share behind fourth-place OKC Energy FC ... and then there’s fifth-place Memphis sitting three points under OKC, but with a minimum of three games in hand on the other three competitors.

While a draw keeps a lifeline going for Atlanta and Indy, they also both know a sharing of the spoils likely won’t be enough to help reel in OKC and Memphis down the stretch. Does that mean a wide-open affair leaving caution to the wind? Or perhaps a lock-tight affair in which the sides wait to exploit one golden opportunity – or fatal mistake by the other – then look to shut things down? The most recent #INDvATL sample set looked the latter, a moment of individual brilliance by Aiden McFadden midway through the first half pushing ATL UTD 2 to a 1-0 win despite the Eleven’s 16-8 shot advantage.

As the urgency for points mounts, the good news for Indy Eleven is that reinforcements have arrived. Midfielder Kevin Partida and defender Tobi Adewole both made their club debuts with solid starts in Wednesday’s 1-1 draw in Oklahoma City, and summer USL Academy signing Allan Torres also impressed in his first meaningful midfield minutes under Interim Head Coach Max Rogers. It’s always good to have options, and between injuries and heavy legs Rogers will need to mine that depth on Saturday, when the squad closes out a five-game, 15-day gauntlet that marks the team’s most crowded stretch of 2021.

For Atlanta, that Sept. 4th win at Carroll Stadium provided more than a glimmer of hope for their postseason aspirations; however, gaining just two of a possible 15 points from its five matches since has put the Georgians in a deep hole. Head coach Jack Collison’s side stopped the bleeding of a three-game losing streak with a 1-1 draw of their own on Wednesday night against Central top dog LouCity FC, providing another proof of concept that Atlanta has the chops to compete against any club in the Championship on any given night.

One thing Atlanta United will have to overcome is its dismal road form, as the recent triumph at Carroll was one of the few bright spots in a now 2W-8L-3D ledger outside of the Peach State. Atlanta’s once-high flying attack has been grounded as of late as well; after scoring multiple goals in half of their first 20 contests, the Five Stripes have done so just once across their last eight outings – and that coming in a 2-3 defeat to Rio Grand Valley FC last weekend.

First, a natural segue between this section and the last: ATL UTD 2 will hold a potential postseason tiebreaker over Indiana’s Team courtesy of their insurmountable advantage in the season series that stands at 2W-0L-1D for Atlanta heading into Saturday night.

Indy Eleven trails the all-time series against Atlanta United 2 by a 2W-3L-2D margin, with ATL breaking the series deadlock in that aforementioned 1-0 win at Carroll Stadium on Sept. 4. The first two meetings of the season were contested at Fifth Third Bank Field in suburban Keenesaw, Ga., where the teams dueled to a 1-1 draw on July 7 before ATL dominated from the jump in a 6-2 win on August 8.

It’s a tale as old as time: Give Ayoze the ball and watch something magical unfold. The midfield maestro has been a mainstay on Indy Eleven’s team sheet since his arrival to the Circle City in 2018, and he’s remained just as proficient now as he was then. The 35-year-old typically marches along the left flank, darting through the opposing lanes and masterfully picks out his teammates having completed just under 83% of his passes this season. A midseason knock impacted his availability, but the Puerto de la Cruz born midfielder has made the most of his minute on the pitch this season.

Historically, Ayoze has been asked to track across the entire left side of the pitch, but with Wednesday’s apparent shift to a 4-4-2 formation at OKC Energy FC he was given more freedom to run amok in the attacking third. The change paid off in Indy’s favor when the Spaniard played creator for Manuel Arteaga’s close-range header with a beautiful cross play in through the top corner of OKC’s 18 for his third assist of the year. With the captain coming off in the 74th minute in the midweek contest, that likely sets him up for a fair share of Saturday’s play time as well.

Trying to plan tactics around a team like Atlanta United 2 is often a difficult task with 39 players between USLC, Academy, and First Team rosters having made appearances for the Five Stripes Jr. in 2021. However, ATL UTD 2 has called upon on a solid core of players throughout the campaign to see the side fighting for playoff contention in the Central Division, and USL Championship three-year veteran Mertz is among those leading the charge.

Prior to joining ATL, the Pittsburgh native tallied 12 goals and eight assists in 48 appearances with his hometown Riverhounds SC. While his production has taken a dip since arriving to “The A”,  having netted a lone goal in 23 shots across this season’s 24 appearances, what the 24-year-old lacks in scoring he makes up for in his ability to cover ground. Mertz’s box-to-box play has kept opposing teams busy throughout the year, having won 113 of 224 duels while combatting deep in his team’s half. Mertz’s ability to switch to an attacking role has paid dividends, as he currently leads his side with five assists on a club-second-best 37 chances created. Ten of those were produced during Atlanta’s three games versus the Eleven, which means shutting down Mertz before he has chance to create scoring opportunities will be a must for Indiana’s Team come Saturday evening.