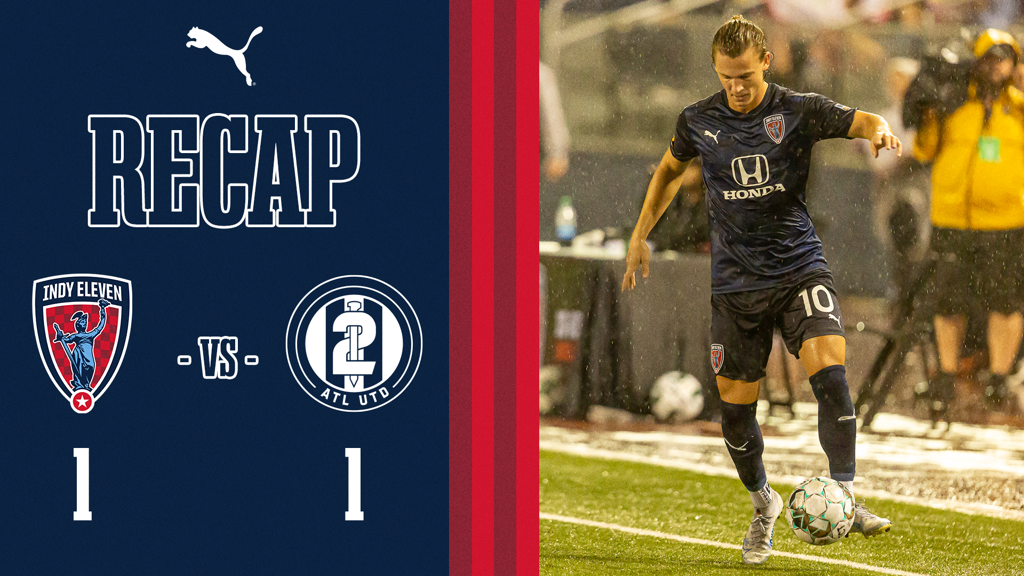 INDIANAPOLIS – Indy Eleven looked primed to gain the full three points in a pivotal match for playoff positioning against Atlanta United 2, but a last-minute goal by the visitors forced a share of the spoils from a 1-1 draw at IUPUI Carroll Stadium. Forward Manuel Arteaga improved his scoring lead for the Boys in Blue with his ninth goal of the season early in the second half, but Aiden McFadden again played the villain for Atlanta, knocking home a loose ball on United 2’s final attacking thrust in stoppage time.

The result kept Indy and Atlanta even in the Central Division standings, with both now sitting on 31 points. While Atlanta holds the tiebreaker between the two sides courtesy of taking the head-to-head record, Indy Eleven holds a game in hand with four games remaining to the Georgians’ three. Both teams currently sit four points behind both OKC Energy FC (5 games remaining) and Memphis 901 FC (7 games remaining), with the former set to host San Antonio FC on Sunday in one of Week 24’s final contests.

The first half unfolded carefully at “The Mike”, both sides looking hesitant to make a crucial error under rainy conditions. It did eventually kick into gear, a header by United 2 defender Noah Cobb in the 26th minute forcing the game’s first save out of Eleven ‘keeper Bobby Edwards. Three minutes later it was Indy taking the attacking initiative, as Arteaga snapped off a low shot from the top of the arc that he tried to skip past Rocco Rios Novo, but the Atlanta netminder went low to smother and gather.

Atlanta striker Amadou Diop danced through multiple Indy defenders to get inside the area in the 37th minute, but late sliding pressure from defender Patrick Seagrist on a 15-yard effort allowed Edwards to gather easily in the end. Matias Benitez and Diop closed the half with dangerous looks that missed the frame, sending the visitors into the break with an 8-2 advantage in shots and 71%-29% lead in possession, but nothing to show for it in the still scoreless affair.

In the 53rd minute, Indy used the same combination to move the scoreboard first as it did on Wednesday night in Oklahoma City. A pinpoint cross from the left flank by Indy captain Ayoze found Arteaga at the six, and the Venezuelan marksman rose to nod low and inside the left post to put the Boys in Blue in front 1-0.

Atlanta went sniping for the equalizer immediately, efforts by Connor Stanley, Matias Benitez and Amadou Diop all missing the target from around the top of the area with five minutes of the hour mark. As the game opened up Indy would get some looks at well, Seagrist’s near post effort off a break into the left side of the area that hit the side netting in the 73rd minute marking the most dangerous threat for the home side.

Diop kept his foot on the gas for Atlanta, rising to snap off a header that missed just wide in the 77th minute, and two minutes later stealing a ball at midfield and nearly forcing a 1-v-1 against Edwards if not for Indy defender Jared Timmer’s remarkable recovery run to thwart the chance. The 80th minute saw Stanley whistle a chance just over the crossbar, and four minutes later Diop slid into the six looking to redirect Darwin Matheus’s probing cross from the left, but interference from Edwards help knock the ball out for an Indy goal kick.

Indy seemed as if it had full points in hand as three minutes of stoppage turned into five, but Atlanta’s last gasp effort paid dividends. Edwards looked to have a header in traffic at the six by Diop corralled on his line, but the wet ball slipped from his grasp, allowing McFadden to sweep the loose ball into the roof of the net, breaking the hearts of the Eleven faithful.

The Boys in Blue will then return home on Saturday, October 16, when archrival Louisville City FC crosses the Ohio River for the second and final time in 2021. Tickets for the 7:00 p.m. ET kickoff on “Real Men Wear Pink Night” presented by Community Health Network Foundation can be secured by visiting indyeleven.com/tickets or by calling 317-685-1100 during regular business hours. Fans who can’t make it to “The Mike” can watch live on MyINDY-TV 23 and ESPN+, listen on Exitos Radio 94.3 FM & exitos943.com and follow @IndyElevenLive on Twitter.