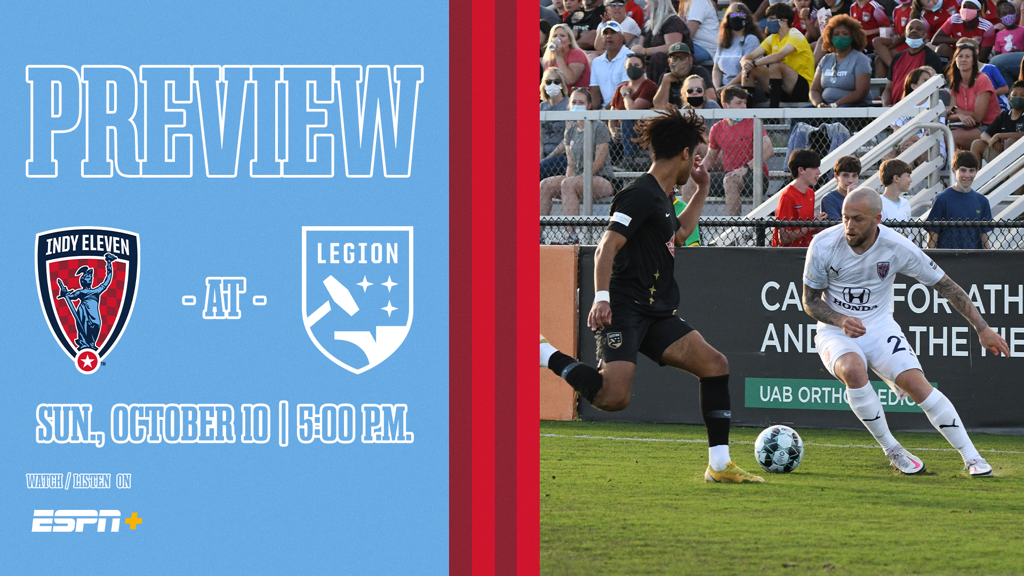 This Sunday’s regular season series finale between Indy Eleven and Birmingham Legion FC comes loaded with playoff implications for both sides. The Boys in Blue currently sit in seventh place (31 points) in the Central Division table, seven points removed from the fourth and final playoff spot held by Memphis 901 FC. On the flip side, Legion FC currently sits in second having been the first club in the division to punch its ticket to the post season, currently sitting two points away from first-place Louisville City FC for the Central’s top seed with five games remaining for both teams.

With just four regular season contests remaining for Indiana’s Team, getting back into the win column is a “must” in order to keep the chance for a postseason berth within reach. With 43 maximum points available on the season, Indy will also have to hope for favorable results from teams ahead on the table:

A loss on Sunday to Legion FC and wins from third-place FC Tulsa and Memphis 901 FC against their Mountain Division opponents would see Indiana’s Team out of the playoff race.

Indy came close to closing the gap in its last two outings at OKC Energy FC (September 29) and against Atlanta United 2 (October 2) after opening the scoring both matches via connections from Ayoze to Manuel Arteaga. Despite leading into the final minutes of both matches, the Boys in Blue fell victim to late-game concessions in both fixtures, ultimately resulting in draws at the final whistles. It was a similar story for Indy last time out against Legion FC on July 24 as the scoreline sat at 1-1 before a goal a minute into stoppage time by Jonathan Dean saw the visitors claim at three points at the death at Carroll Stadium.

With Indy’s five-game, 15-day gauntlet, the team’s most crowded stretch of 2021, now in the rearview mirror, the players will enter Sunday’s contest with a full week’s rest for the first time since the start of September. With the addition of former USL Championship MVP Emmanuel Ledesma as well as the recent performances of new in blue midfielder Kevin Partida and defender Tobi Adewole, the opportunity to recover could provide more depth for Interim Head Coach Max Rogers’ team sheet heading into Sunday and beyond.

Since July 24, Birmingham has been one of the toughest sides to conquer after putting up an 8W-3L-4D ledger (GF: 28/GA: 19), having tallied at least one goal in its last 15 contests. The Three Sparks have shown signs of fortifying the hull at BBVA Field as well, having not dropped points at home since August 22 following a 2-1 loss to FC Tulsa. Now on a three-game winning streak and undefeated in its last five matches, Legion FC will look to keep the streak alive in front of a home crowd against an Indy Eleven side that claimed the first W at BVAA Field in the 2021 season opener.

Visit USLChampionship.com’s Scores page to track games once they are underway:

Indy Eleven currently trail in all-time series heading into the weekend after falling 2-1 to Legion FC on July 24. The first two of their four 2021 contests saw each collect 1-0 wins on the road, beginning with an Indy triumph in both teams’ season openers back on May 1, Manuel Arteaga opening his Eleven scoring account to lift Indiana’s Team to victory. Birmingham returned the favor at Carroll Stadium earlier this month on July 3, an in-form Neco Brett doing all the damage necessary for the visitors. The Three Sparks tallied another win 21 days later at Carroll Stadium, Prosper Kasim’s opening strike was neutralized by an Phanuel Kavita own before Johnathan Dean found the game-winner a minute into second half stoppage time.

It was a different story when the clubs introduced themselves in Birmingham’s inaugural 2019 campaign, with Indy Eleven registering a dominant 3-0 win in the sides’ first meeting at Lucas Oil Stadium in late June, followed by Legion FC claiming a 1-0 result in Alabama in September.

Since signing with the Boys in Blue on September 22 and completing the paperwork process to enter the States, Ledesma arrived in the Circle City last weekend and is eligible for selection this Sunday at Birmingham Legion. The 33-year-old could potentially see his first USL Championship minutes since 2018 after scoring 16 goals and a then league record 16 assists en route to being name the league’s Most Valuable Player that season in his first year with FC Cincinnati. After making the jump to Major League Soccer in 2019 with FCC, Ledesma spent the last two years with Finnish First Division side SJK (Seinäjoen Jalkapallokerho) before returning to the Midwest.

With 61 career goals and 50 assists in 277 appearances, the Argentinean could be just the spark Indy Eleven is looking for in the final third. Ledesma has demonstrated time and time again his ability to score from anywhere around the opposition’s 18-yard box, and his vision to pick out teammates in quality goal scoring positions will only strengthen Indy’s playmaking potential alongside forward Gordon Wild (43 chances created) and midfielder Nicky Law (41). Birmingham defenders will need to be on high alert should Ledesma take to the pitch Sunday evening.

Speaking of defenders, Crognale has been a force to be reckoned with in Legion FC’s back line through the 2021 campaign. In 21 appearances – 19 of which in the starting lineup – Crognale has tallied a team-high 93 clearances and is third among his teammates in interceptions with 34. In addition to his antics in the back line, the 27-year-old has found ways to score decisive goals for the Three Sparks, including the game-winning goal in last Friday’s 1-0 win at Sporting Kansas City II that earned him a spot on the Week 24 USLC Team of the Week.

A peek at Crognale’s heatmaps from recent fixtures shows that he tends to sit in his team’s half just behind the center circle. The former Boys in Blue defender often holds his position and quickly tracks back deep into the 18 should opponents find a way into goal scoring opportunities along the flanks. Indy’s attacking corps will be tasked with finding creative solutions around a Crognale-led back line while also making sure the defender stays clear of any clear looks at goal.