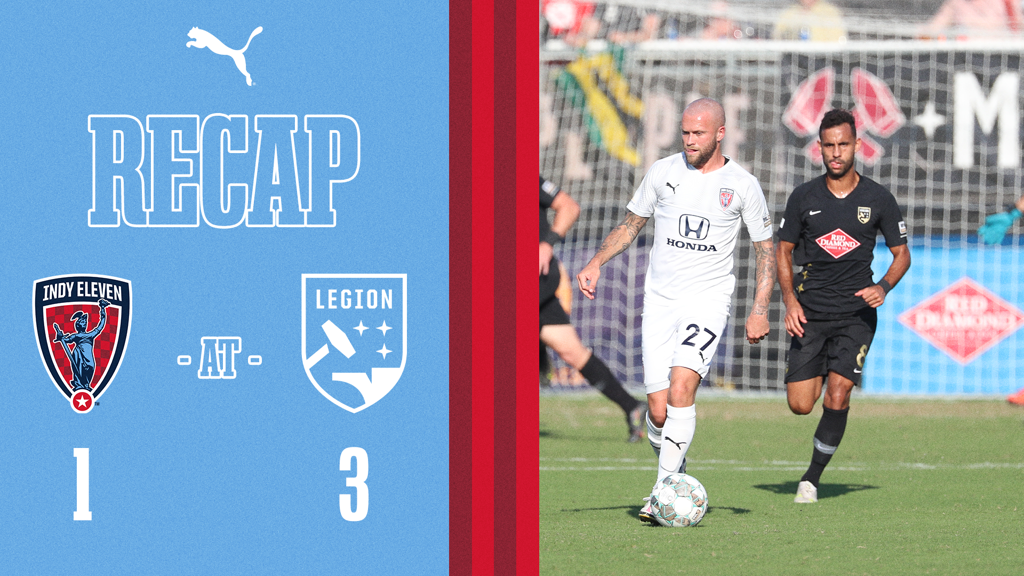 BIRMINGHAM, ALABAMA – Indy Eleven continued to battle for a crucial full three points in a pivotal match for playoff positioning at Birmingham Legion FC, but a trio of goals from the hosts thwarted the Boys in Blue Sunday evening. Midfielder Nicky Law netted his third goal of the season with a first half equalizer but wasn’t enough to overcome second half tallies from Legion FC’s Eli Crognale and Jake Rufe.

Sunday’s loss means that the margin to clinch a playoff berth continues to get thinner for Indy Eleven. Indy remains level on points with Atlanta United 2 at 31, with the Georgian side holding the tiebreaker after claiming the head-to-head record last Saturday at Carroll Stadium. With only 40 possible points available for the rest of the season, Indy will be closely watching the results of those ahead of them in the stands – FC Tulsa (39 pts.), Memphis 901 FC (38 pts.), OKC Energy FC (35 pts.) and Atlanta (31 pts.).

Heavy pressure from Legion FC paid dividends almost immediately as the home side registered three shots on frame in the opening five minutes of the match, two of which forced Eleven goalkeeper Jordan Farr into diving saves. However, Birmingham forward Neco Brett opened the scoring in the eighth minute with a dipping shot inside Indy’s 18 that flew across the face of the goal and into the upper-right corner out of Farr’s diving reach, the opportunity provided by midfielder Ryan James’ flick through the top of the box.

The Three Sparks continued the offensive as Prosper Kasim struck from inside Indy’s penalty area in the 11th minute, but the attempt ended wide of the left post after pressure from Eleven defenders Tobi Adewole and Jared Timmer forced the striker to mishit. Brett put Indy’s back line on notice once again 11 minutes later with a one-time hit off Anderson Asiedu’s squared pass into the 18, but a deflection off Timmer’s ankle sent the ball wide left of the goal with Birmingham being shown the offside flag on the play.

The Boys in Blue had their first look at goal in the 24th minute after earning a free kick from nearly 30 yards out. In his debut with Indiana’s Team, midfielder Emmanuel Ledesma lobbed the dead ball towards the far-left post, but windy conditions carried the ball just out of reach and over the byline for a Birmingham goal kick.

Neither side had another chance at goal until Eleven midfielder Nicky Law leveled the game in the 42nd minute. A long ball from midfielder Gershon Koffie found Ledesma along the right flank for another quick pass to Nick Moon inside Legion FC’s 18-yard box. Moon started to dribble out before turning to drive a low pass to Law at the top of the six, the Englishman chipping the ball over Birmingham ‘keeper Matt VanOekel for his third goal of the season. Despite Legion FC outshooting Indy 10-3 in the first 45 minutes, both teams entered the locker rooms on even ground.

Both sides cautiously restarted the game with Indy getting the first bit of action after the break in the 57th minute when Ledesma’s in-swinging cross from the corner found froward Manuel Arteaga in front of Birmingham’s goal as Venezuelan’s nodded effort fell just wide of the right post. Indiana’s Team put VanOekel to the test again two minutes later as Arteaga’s pass from the right flank bent around two Legion FC defenders and to the feet of Law for a one-time shot from close range, the goaltender doing well to palm the attempt back up the field.

Another 10 minutes passed before Legion FC its next look at goal via another dipping shot from 20 yards out by substitute Zach Herivaux, but Farr came up big with a jumping block to push the ball over the crossbar. Shots from distance continued to pay off big for Birmingham, as Crognale capitalized on a giveaway shortly after entering the match from 30 yards out of Indy’s goal, taking one touch to settle before dipping the ball into the back of the net in the 74th minute.

Indy and Birmingham traded back-to-back chances in the 77th minute with both goalkeepers being forced into diving saves. Legion FC found another look in the 84th minute by way of Mikey Lopez with a low shot inside Indy’s penalty area, but Farr came to the rescue once again after deflecting the ball upwards and collecting before Birmingham could react.

However, Legion FC claimed the final goal of the evening four minutes into second half stoppage time. All 11 of Indy’s players crowded Birmingham’s box to prepare for a corner kick in the dying seconds of the match, but a turnover from the cross led to Rufe getting a chance at goal from 55-yards out and finding the wide-open net before the final whistle.

The Boys in Blue will return home on Saturday, October 16, to take on archrival Louisville City FC for the final time in regular season play. Tickets for the 7:00 p.m. ET kickoff on “Real Men Wear Pink Night” presented by Community Health Network Foundation can be secured by visiting indyeleven.com/tickets or by calling 317-685-1100 during regular business hours. Fans who can’t make it to “The Mike” can watch live on MyINDY-TV 23 and ESPN+, listen on Exitos Radio 94.3 FM & exitos943.com, and follow @IndyElevenLive on Twitter.