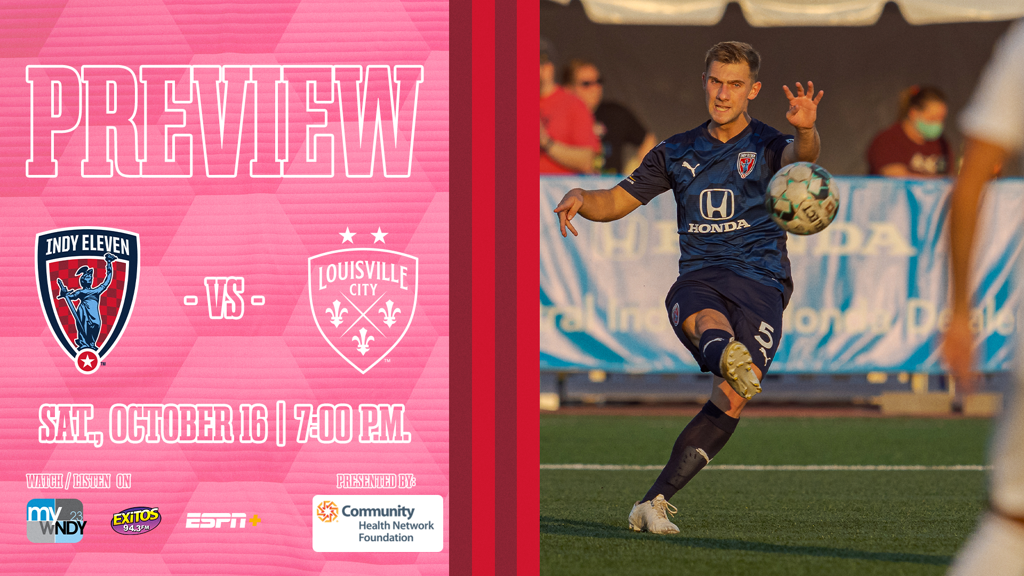 Yes, there are deep playoff implications for both Louisville-Indianapolis Proximity Association Football Contest combatants surrounding their affair Saturday night at “The Mike”, but we’ll get to that later. Judging from the passion of players and fans alike in their three previous meetings this season, the motivation to capture this year’s LIPAFC series crown will be more than enough stakes for the evening – with the Boys in Blue perhaps having a little more “oomph” in order to play spoiler against their archrival.

Another impetus for Indiana’s Team is to simply end the season on a positive note, playoff situation regardless. Louisville’s 2-0 win at Carroll Stadium on Sept. 18 marked the start of the Eleven’s current six-game winless streak (0W-4L-2D), and the Boys in Blue would love nothing more than to get their groove back starting with a rivalry triumph that could springboard to a solid finish.

Help on that front could come with the possible returns of key contributors from injury, as defenders Neveal Hackshaw and A.J. Cochran and midfielder Rece Buckmaster all returned to full training earlier in the week, potentially giving Interim Head Coach Max Rogers more options to dampen the Eastern Conference’s highest-scoring attack (57 goals). On the offensive side of the ball for Indy, early returns from Emmanuel Ledesma’s much-anticipated debut last Sunday in Birmingham were positive, as the Argentine playmaker earned the “hockey assist” on the squad’s 41st minute equalizer in an eventual 1-3 defeat. The chemistry between he, fellow “Manu” Manuel Arteaga, and whomever else Rogers deploys on the squad’s top line will be one of the more intriguing developments down the stretch for a goal-hungry squad that has failed to score multiple times in nine consecutive contests.

On the opposite side, Louisville enters the LIPAFC rubber match stinging from a 1-2 defeat at Memphis 901 FC on Wednesday night, a result that snapped LouCity’s seven-game unbeaten run (four wins, three draws) and allowed a red-hot Birmingham Legion FC side to claim the Central Division’s top spot by a mere point.

That match came in the middle of a three-game week, but the Indy faithful shouldn’t expect to see a sluggish squad come Saturday as newly-minted full-time Head Coach Danny Cruz managed the minutes of one of the deepest rosters in the Championship to allow for plenty of fresh legs on the weekend. While that may or may not include the league’s third leading scorer, Cameron Lancaster (17 goals), who went the full 90 in both contests, we can expect to see a heavy dose of the Championship’s assist-leader, Brian Ownby (10 assists, 4 goals), starlet winger Jonathan Gomez, and perennial thorn-in-the-side of the Boys in Blue, Antoine Hoppenot (3 goals, 4 assists).

When it comes to possible postseason inclusion, “The Math” has finally caught up to Indiana’s Team, which knows it must win Saturday – and over the following two weekends – in order to keep its slim USL Championship Playoff hopes alive.

Alas, here’s all that needs to happen for the Boys in Blue to make a mind-bendingly complicated run to the postseason come to fruition:

Indy Eleven could put a nice little feather in its 2021 cap by taking the season series against Louisville outright for the first time with a win on Saturday. Indiana’s Team turned the LIPAFC series on its head back on May 22 with a 2-1 comeback win at Lynn Family Stadium, which snapped Indy’s 10-game winless streak in the rivalry and gave Indiana’s Team its first win in the series since their first USL Championship regular season affair on May 5, 2018. The second meeting also came on the wrong side of the river on June 26 and was no less entertaining, starting with Cammy Smith (9’) and Neveal Hackshaw (20’) equalizing within the first 20 minutes and followed by Manuel Arteaga’s go-ahead goal just prior to halftime. However, Corben Bone’s 78th minute strike helped Louisville share the spoils from a 3-3 draw. The first meeting at Carroll Stadium on September 18 was all LouCity, which used goals by Hoppenot (41’) and Lancaster (69’) on either side of the half to notch a 2-0 victory.

Timmer’s versatility has been amplified in recent weeks as Indy continues to recover from an injury bug that has kept several defensive players from the team sheet. The Butler University alumnus’ athleticism paid huge dividends through the busiest stretch of the season, and he enters the final slate of games as one of only three Boys in Blue to have played more than 2,000 minutes. Onlookers have seen the 24-year-old primarily in the midfield, but he has since cemented his role as a center back while defender A.J. Cochran recovered from an injury sustained in August.

Despite falling 3-1 at Birmingham Legion FC last Sunday, Timmer had a standout defensive performance, leading his teammates in clearances (4), interceptions (3) and passes/successful passes (51-41). The tandem effort between Timmer and new in blue Tobi Adewole saw the pair nearly paint the heatmap in Indy’s defending half entirely green. The efforts between the two could’ve seen end the night at least with a draw, had it not been for a dipping shot from distance by Legion FC’s Eli Crognale that put the hosts up late in the game. Continued stout defending around the 18-yard box and shutting down Louisville’s crossing plays into the area, such as forward Cameron Lancaster’s stoppage time game-winner against Sporting Kansas City II on October 9, will be a top priority from Timmer and company.

After spending majority of the year sidelined by injury, Jimenez’s reintroduction to the lineup has added a late-season depth boost for Louisville. Though the fifth-year boy in purple has been readjusting to consistent minutes since returning on August 22 in LouCity’s away draw at OKC Energy FC, he has finally started to pick up where he left off in the first two months of the 2021 campaign after registering a goal, two assists and eight chances created in his last three appearances. The remaining three games for the Kentuckian side provide an optimal chance for Jimenez to continue building match fitness before entering the postseason.

Jimenez is as versatile as it gets – he can play forward, he can distribute passes, he can play box-to-box, he can create chances, and has been instrumental in a Louisville attack that has tallied eight goals in the last three outings, including his assist on Paolo DelPiccolo’s game-winner against New Mexico United on October 3 and his 88th-minute equalizer in City’s 4-3 win against Sporting KC II. In the last three matches, Jimenez has been seen marshaling both flanks (starting along the left twice and right once), taking the bulk of his touches along the touch line on either side of the pitch. Though he hasn’t put up the highest passing stats in that time (73.8% average passing accuracy), his possession along the edge of the field has been successful in pulling opposing players out of position, opening channels for his fellow midfielders to play forward, especially in Louisville’s defending half. Shutting down passing lanes through the center of the pitch will be key for the Indy Eleven midfield come Saturday evening.