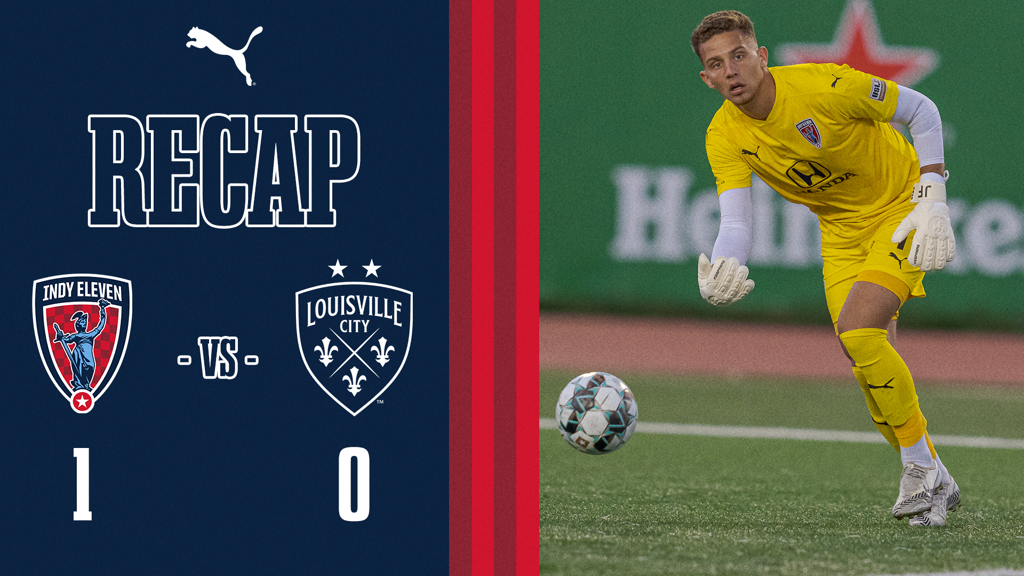 INDIANAPOLIS – Indy Eleven used an 85th minute goal by forward Manuel Arteaga – the Venezuelan talisman’s tenth of the season – to post a 1-0 win over Louisville City FC Saturday evening at IUPUI Carroll Stadium. Goalkeeper Jordan Farr’s five key saves combined with an energetic defensive effort all over the pitch gave the fourth-year goalkeeper his fifth clean sheet of the campaign and the squad its sixth shutout overall.

“It was an even game and both goalkeepers made some good saves – and especially Jordan Farr, I thought he had a great night and made some important stops in the second half," said Indy Eleven Interim Head Coach Max Rogers. "I’m proud of all of our players. They worked so hard for each other and for the club all night and deserved that bit of luck for the goal."

The win temporarily kept Indy’s slim postseason chances alive; however, FC Tulsa’s 1-1 draw at San Antonio FC means the Oklahoma side must drop Wednesday’s result against Atlanta United 2 before heading to the Circle City on Saturday. The Boys in Blue still have two games remaining in regular season play, hosting FC Tulsa next Saturday evening before closing on the road at Memphis 901 FC on October 30. The victory did allow Indy Eleven to capture the season series over its archrival for the first time in four tries dating back to its inaugural USL Championship campaign in 2018 courtesy of a 2W-1L-1D record in LIPAFC action in 2021.

LouCity were first to threaten goal in the sixth minute through a pair of chances, but Antoine Hoppenot’s 15-yard curler smacked off the right post, and Farr pounced on Cameron Lancaster’s headed rebound to follow. In the 15th minute, Louisville midfielder Paolo DelPiccolo looked to bend one in himself off a free kick just outside the area, but the visiting captain pushed his effort just wide of the right post.

Indy followed with its own set piece opportunities, starting in the 18th minute when defender Tobi Adewole crashed the six to meet Emmanuel Ledesma’s outswinging corner, but his chance also fell just wide right. Another dead ball service by Ledesma in the 27th minute was nodded backwards towards goal by Arteaga, but a bang-bang offside call marked the chance dead. On the stroke of the half hour Indy midfielder Kevin Partida stripped the ball in midfield and quickly played Nick Moon towards goal, but the right winger’s near-angle chance was stopped by LouCity goalkeeper Chris Hubbard, despite a slight spill on the collection.

Louisville was again aggressive in attack straight out of the locker room, but Farr was up to the task, thwarting a pair of close-range chances by Jorge Gonzalez within the opening three minutes of the stanza. The Oregon native came up big twice more, first saving Brian Ownby’s blast from distance in the 56th minute on a short hop and a minute later looking big on a corner kick nodded home on the doorstep.

The match turned ragged for most of the next half hour, with fouls and offside infractions ruling over quality chances. However, things finally sprung to life – and turned in favor of the hosts – in the 85th minute when Nicky Law had ample time to pump in a cross from the left side of the penalty. LouCity’s Jonathan Gomez whiffed on the clearance, leaving it in the path of Arteaga to finish first-time with a low shot inside the right post that finally moved the scoreboard.

Indy Eleven will end its home campaign at Carroll Stadium next Saturday, Oct. 23, with the club’s annual Fan Appreciation Night contest against FC Tulsa, presented by your Central Indiana Honda Dealers. Tickets for the 7:00 p.m. ET kickoff can be secured by visiting indyeleven.com/tickets or by calling 317-685-1100 during regular business hours, while fans who cannot make it to “The Mike” can follow the action live on MyINDY-TV 23, ESPN+, Exitos Radio 94.3 FM / exitos943.com (in Spanish), and the @IndyElevenLive Twitter feed, also presented by Central Indiana Honda Dealers.