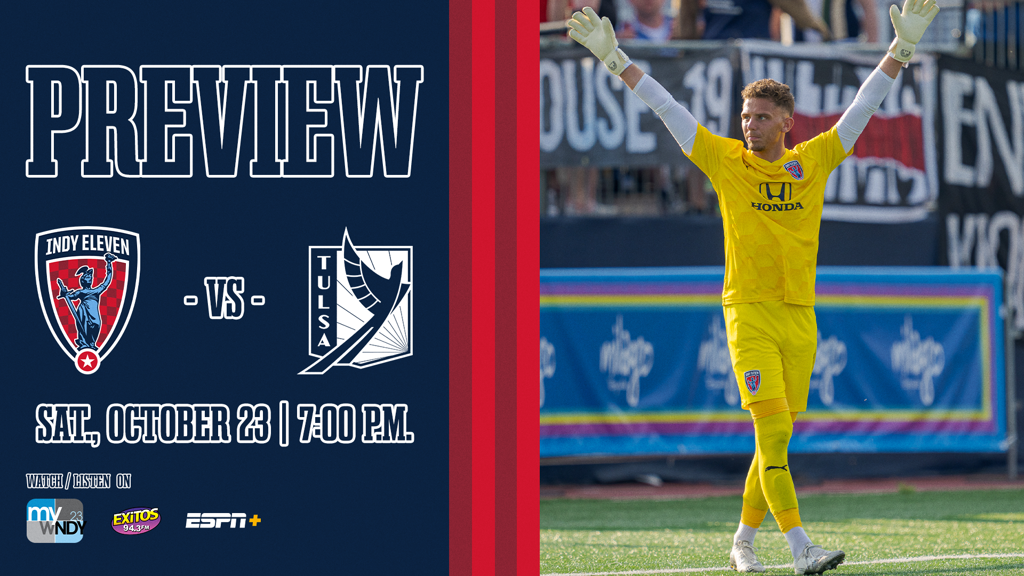 FC Tulsa’s Wednesday win over Atlanta officially pushed Indy Eleven out of postseason contention, but it just so happens the Boys in Blue will get a chance at an immediate measure of revenge when they host the Oklahoman side in Saturday’s 2021 home finale at “The Mike.”

FC Tulsa will be looking to wrap up the Central Division’s fourth and final playoff spot, and can do just that with either a win or draw. However, as Louisville City FC learned last week, you can’t just walk into Carroll Stadium and expect to boost your postseason standing. Indy’s evenly contested 1-0 victory over LouCity FC last Saturday snapped the Eleven’s six-game winless streak, while also keeping the Kentuckians pinned behind Birmingham for the Central’s top spot. That result likely drew the attention of both Tulsa (43 pts.) and third-place Memphis 901 FC (44 pts.), who Indy will meet in its season finale next weekend. So while Indiana’s Team may not be playoff bound, you can bet your bottom dollar its aiming to continue to impact those proceedings across these final two contests.

That 1-0 win over Louisville was fueled by Manuel Arteaga’s late-game poacher’s tally and a defensive effort highlighted by five saves out of Jordan Farr, an effort that garnered the fourth-year netminder out of Oregon his first career nod to the USL Championship Team of the Week presented by Cleer Audio. Meanwhile, Arteaga’s 10th goal of the campaign continued the Venezuelan’s steady goal haul that includes a goal in three of Indy’s last four contests. In fact, the team’s original “Manu” (no disrespect to Mr. Ledesma) has tallied six of the squad’s last eight tallies dating back to late August, cementing his status as the linchpin of Indy’s attack.

Does postseason elimination change the calculus of who might see the field for Indy across these last two weeks? It’s hard to say, but we do know that Interim Head Coach Max Rogers could have defender Neveal Hackshaw back at his disposal, as the Trinidad & Tobago international has returned to full training and officially been removed from the club’s injured list – which unfortunately tacked on Nicky Law and Gordon Wild during the week.  One face we’d be surprised not to see at some point during the evening is Hackshaw’s frequent left-sided partner Ayoze, who will join the team’s on-field “Century Club” alongside Don Smart (101), current vice-captain Karl Ouimette (104), and the legend Brad Ring (115) with his next appearance.

For Tulsa, until their midweek 4-0 win over Atlanta United 2 it had been a rough go since their last meeting with Indy Eleven, a 2-1 win at ONEOK Field on Sept. 8 which gave the squad a fifth straight victory at the time. However, that was followed by six games without a three-point result, a puzzling 0W-3L-3D stretch with only four goals scored compounded by the fact that four of those contests were at home.

However, Wednesday’s win seemed to cure all ails in the home cooking department, setting up a scenario that sees Tulsa needing just one point from its last three games (@ IND, @ MEM, and vs. OKC) to secure passage to the postseason. In that match, Rodrigo da Costa, Jason Johnson, and Kevin Garcia bundled together three goals in a six-minute span midway through the first half, allowing ample breathing room before Lucas Coutinho’s cherry on top in the 91st minute. The performance was emblematic of Tulsa’s “scoring by committee” approach all season long, featuring four players (da Costa, Dario Suarez, Marlon Santos, and Joaquin Rivas) with at least five goals and six players with at least three assists (led by da Costa’s five helpers).

FC Tulsa’s move to the Eastern Conference for the 2021 USL Championship campaign marked the start of a new series, which Indiana’s Team will be looking to pull even in with three points on Saturday. FC Tulsa made the homecoming to IUPUI’s Michael A. Carroll Stadium a rude one back on May 8, as Joaquin Rivas’ second half brace spoiled the Eleven’s 2021 home opener via a 2-0 defeat. Indiana’s Team returned the favor at ONEOK Field on August 4, late goals by Gordon Wild and Peter-Lee Vassell helping the Boys in Blue claim a 2-0 road win of their own. A return to Oklahoma on Sept. 8 was not as kind for Indy, which saw Manuel Arteaga’s 34th minute equalizer nullified by a late Daniel Suarez tally in a 1-2 defeat.

Jordan. #$%@ing. Farr. Indy’s four-year netminder put up a show-stopping performance that kept Louisville City FC scoreless in last Saturday’s 1-0 shutout at Carroll Stadium. Farr’s five saves (including a Save of the Week nomination) earned the ‘keeper his fifth clean sheet of 2021, and the team’s sixth, en route to claiming the 2021 Louisville-Indianapolis Proximity Association Football Contest series, as well as his first career appearance on the USL Championship Team of the Week.

Whether diving, smothering, punching or catching, the Salem, Oregon native was able to neutralize one of the league’s strongest attacks in LouCity FC last weekend. Saves aside, one of Farr’s biggest strengths is his ability to communicate. Anyone that has watched Farr play in person knows that he is constantly chatting from the box, be it organizing those in front of him, calling out his catches or even just hyping up his teammates across the pitch. Farr will need to ensure his communications skills remain sharp in order to help slow a high-pressing Tulsa attack.

FC Tulsa has been consistent in the attacking third all season long, but none of its players have been nearly as dialed in as da Costa in front of the opposition’s net. The 27-year-old currently leads his side in goals (11), assists (5) and chances created (41), and he shows no sign of slowing down as the Black and Gold continue to fight to secure the final playoff position in the Central Division.

The Brazilian was an important figure in Tulsa’s offensive press Wednesday evening, notching the game-winning goal in the 17th minute, as well as tallying three shots, three key passes and assisting the nail-in-the-coffin strike in second half stoppage time along the way. His score-opening strike was opportunistic, da Costa tapping the ball in from close-range on his first touch as forward Joaquin Rivas pulled multiple defenders off their marks before assisting on the strike. da Costa’s assist on the final goal is a testament to his ability to read the game, having made a deep run along the left edge of Atlanta’s 18 before bending a low cross in front of two defenders inside the penalty area to Lucas Coutinho. Indy will want to keep da Costa as far away from the goal as possible come Saturday.