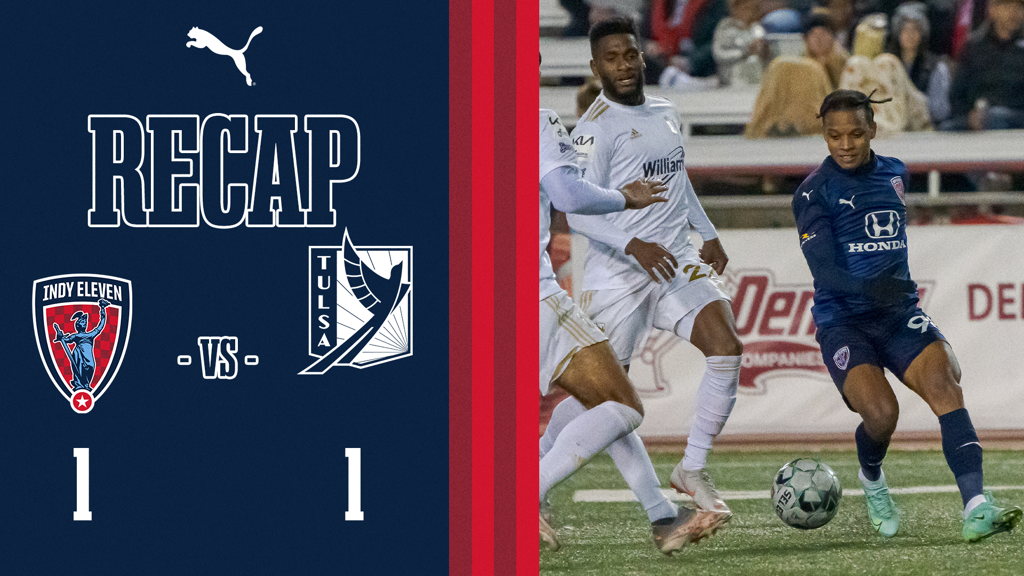 INDIANAPOLIS – Indy Eleven closed out the home portion of its 2021 USL Championship season with a 1-1 draw over playoff bound FC Tulsa Saturday night at Carroll Stadium.

Eleven midfielder Peter-Lee Vassell registered a Goal of the Week caliber strike in the 71st minute for his third goal of 2021. That tally was assisted by club captain Ayoze, the Spanish midfield maestro capping his 100th appearance for Indiana’s Team by taking the team lead in assists all for himself with his fifth helper of the campaign. However, Tulsa evened up through Jason Johnson seven minutes later, a goal that eventually secured the standings point needed for the visitors to claim the Central Division’s fourth and final playoff berth.

While Tulsa was the team in need a result, it was Indy that came out with the attacking impetus – although a couple of shots from distance by Vassell and blocked efforts from Manuel Arteaga and Gershon Koffie in the opening half hour offered just moderate danger.

After a quiet start, things got all sorts of active for Eleven goalkeeper Jordan Farr starting in the 27th minute, when he raced off his line to try and beat Joaquin Rivas to a lofted ball over the backline 30 yards from his goalline. While Rivas looped his shot over Farr, the ball bounced off the left post and spun towards goal, but by then defender Patrick Seagrist was there to sweep the ball off the line.

A minute later, Farr made a more routine play at that same post to save Lebo Moloto’s shot from 25 yards. In the 31st minute, the reigning USL Championship Team of the Week netminder made a key reaction save on Bradley Bourgeois’s point blank header off Rivas’ set piece service. It appeared Tulsa moved the scoreboard in the 38th minute through a Rivas right-footed finish, but the goal was nullified for an offside infraction. That marked the last major look for either side, sending the match into halftime still scoreless.

Indy had the first look of note in the second half five minutes in, but a sliding Arteaga couldn’t get the contact he wanted on Ayoze’s pinpoint service to the top of the six, allowing FC Tulsa ‘keeper Austin Wormell to gather. Seagrist showed up big again in defense three minutes later, putting a strong shoulder into Marlon Santos near the penalty spot to thwart a 1-v-1 look on Farr. Ayoze fancied a look of his own off a Kevin Partida square ball at the top of the area in the 57th minute, but the skipping effort was also gobbled up by Wormell without a spill.

It was a moment of individual brilliance that put the Eleven up in the 71st minute, a short pass by Ayoze setting up Vassell into space on the left flank 25 yards out. From there, the Jamaican international curled a beauty into the far upper corner, causing Wormell to leap in vein and putting Indy up 1-0 heading down the stretch.

Unfortunately, the lead was short lived as Tulsa evened up through a dead ball opportunity in the 78th minute. Moloto’s ball deep into the penalty area was knocked down by Marlon Santos and fell to the feet of Jason Johnson, who powered home in traffic from the six to knot the match at ones.

It was déjà vu for Vassell in the 84th minute, when he found himself in the same spot with the same amount of space as his sublime finish, but this time a low effort to the near post was smothered and covered by Wormell. In the 87th minute Tulsa had their last best chance when da Costa beat his mark across the top of the six to clip Santos’ cross first time, but he sent it just wide right of frame.

Indy Eleven will end its 2021 USL Championship campaign next Saturday, Oct. 30, with an away affair at Memphis 901 FC. Fans can follow the 7:00 p.m. ET kickoff from AutoZone Park live on MyINDY-TV 23, ESPN+, and the @IndyElevenLive Twitter feed, presented by Central Indiana Honda Dealers.