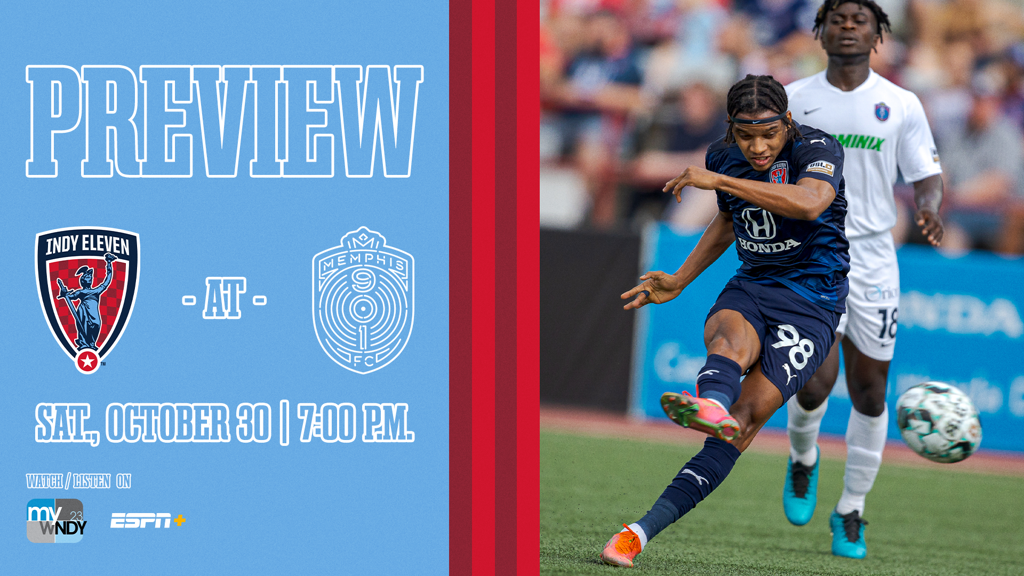 Indy Eleven heads south to end its 2021 USL Championship campaign Saturday night against a Memphis 901 FC squad that is where Indiana’s Team hoped to be, playoff bound. With its midweek win over FC Tulsa, the Tennessee side is in the comforting situation of having its postseason seeding locked in. That gives 901 FC Head Coach Ben Pirmann the option of either resting players and keeping them fresh, or fielding an “A” team to try and keep momentum rolling into the postseason, giving a little bit of unpredictability to what Indiana’s Team may face on the weekend.

And that unpredictability may also spread to Eleven Interim Head Coach Max Rogers’ decision making as well when it comes to line-up choices. Do you go full-bore with your top choice XI and look to grind out a win, the way in which Indy has achieved most of its positive results throughout the season? Maybe you sprinkle in some players that have played limited minutes to get a little more tape for offseason considerations? Or perhaps you just say the heck with it and “release the hounds” towards goal with an attack-heavy formation and personnel?

We do not have a crystal ball for those answers, so we’ll be just as curious as anyone! However, the least surprising line-up choice would be the inclusion of leading scorer Manuel Arteaga, who has appeared in all 31 matches this season and should be in line to become the eighth player in club history to appear in every regular season contest during a single season (including last year’s trio of Tyler Gibson, Drew Conner, and Nick Moon in the COVID-shortened 16-game campaign). Probably shouldn’t be surprised to see midfielder Peter-Lee Vassell out there as well, the Jamaican international proving his danger in attack last weekend against FC Tulsa with a wonderstrike that garnered Goal of the Week consideration.

The main goal for the Boys in Blue on Saturday is to end their season on a high note – and there have been signs of progress on that front over the last month. Following a six-game losing skid through most of September – which included a 0-1 defeat at AutoZone Park on Sept. 22 – the Eleven have steadied their ship by going 1W-1L-3D the last five times out. Ultimately anything less than a postseason berth is a disappointment, but there’s another potential standings place to be gained with a win and an OKC loss at Tulsa that evening. Throughout an inconsistent season, one constant has shone through, and that’s the fact that effort has never been an issue with this year’s Indy Eleven squad. You can bet they’ll run through the tape and give a full 90 – and then some – one more time to close things out Saturday night.

After bossing the series with Memphis across the last two seasons (3W-0L-0D), 901 FC has managed to strike back with a pair of wins and a draw in 2021. Memphis began to make up ground in the series starting with a 2-1 win on June 5 that saw first half goals by Michael Salazar (3’) and Kyle Murphy (35’) prove enough to stave off an Eleven comeback bid that included Karl Ouimette’s tally deep in second half stoppage time. On July 17, the squads settled for a share of the spoils out of a 1-1 draw at Carroll Stadium, Nick Moon (47’) and Salazar (51’) canceling each other out to start the second half. The first meeting at AutoZone Park back on Sept. 22 saw Murphy’s 31st minute tally stand tall in a 1-0 Memphis win.

With midfielder Nicky Law and Eleven newcomer Emmanuel Ledesma unavailable for selection in last weekend’s home finale, Vassell stepped up in a big way having opened the scoring with a second half wonderstrike in the eventual 1-1 draw against FC Tulsa. The Jamaican led Indy’s attack in last Saturday’s affair with four chances at goal (three on frame), one of which found the back of the next for his third tally of the season.

International duty (and difficulties re-entering the country that followed one such trip) contributed to Vassell’s limited minutes throughout the year, but the 23-year-old has begun to make up for lost time in recent appearances. Having started the season along the flanks, Vassell’s shift towards the top of the attack has paid dividends, the forward finding creative ways to force mistakes and capitalize on turnovers in the opponent’s defending half as the squad battles through the final stretch of games. With uncertainty around what type of lineup Memphis will roll out with this weekend, having Vassell on deck to break down a potentially makeshift defense could be the key to seeing Indiana’s Team move the win column one last time in 2021.

At just 22-years old, Kissiedou is continuing his upward trajectory as one of the USL Championship’s rising stars as he closes out his fourth season in the league. The Ivory Coast native has kept consistent numbers across his stat sheet since entering the league in 2017, but he has found himself at the center of important moments more throughout the current campaign after earning his first career Team of the Week honor in Week 1, followed by his career-first Player of the Week plaudit in Week 24 after tallying his first professional brace in a 3-0 win against FC Tulsa.

Kissiedou has been among Memphis’ top distributors through the 2021 season, topping the team’s passing chart with 1,097 and ranking as the third most accurate at 81.8% passes completed heading into the final regular season weekend (well, fourth if you decide to factor in Matt Brucker’s one and only successful pass). As mentioned above, his ability to connect with teammates has led to Kissiedou’s involvement near and in front of goal, having tied for the second-most assists (3) on the second-most chances created (37) among his Memphian teammates, not to mention his place in the 901 FC goal scoring committee with four goals on 42 shots. With strength in numbers in Memphis’ midfield, limiting Kissiedou through the middle of the park could see stifled production for the home side in the regular season finale weekend.