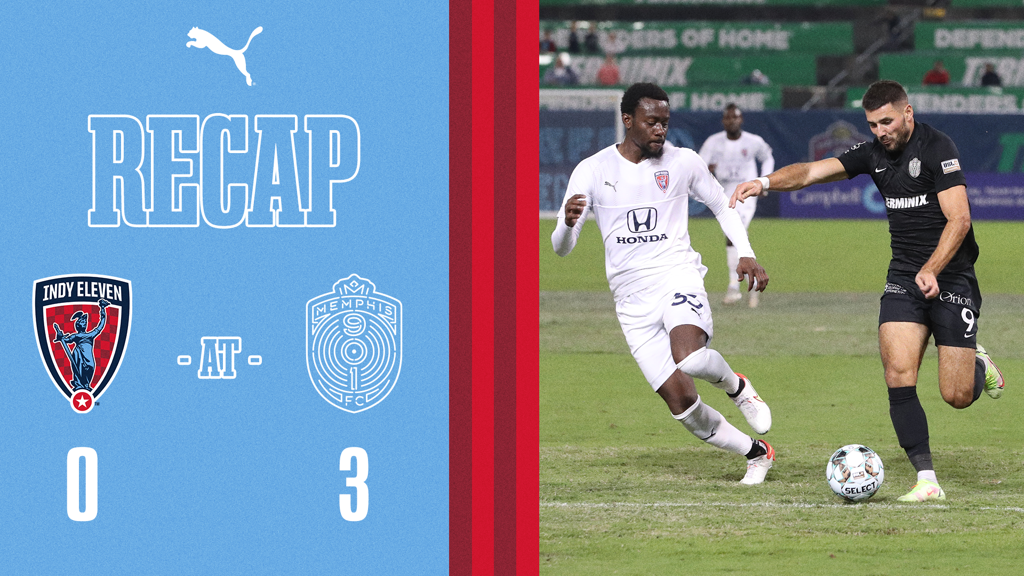 MEMPHIS, Tenn. – Indy Eleven ended its 2021 USL Championship season with a disappointing 3-0 defeat at the hands of a playoff bound Memphis 901 FC Saturday evening at AutoZone Park. The result pushed Indy’s final record on the season to 9W-15L-8D, its subsequent 35 points placing sixth in the Central Division standings to close out its fourth Championship campaign.

After both sides kept each other largely at bay across the opening 10 minutes, Memphis struck first in the 12th minute on a scoring chance unlocked by Mark Segbers’ through ball into the right side of the area. That’s where Michael Salazar squared centrally for a waiting Roland Lamah, who split the space between two defenders to touch past Eleven netminder Jordan Farr and gave 901 FC the early advantage. Memphis kept the pressure on and had two dangerous chances in the middle of the stanza, but goal mouth clearances by Eleven midfielder Gershon Koffie and defender Jared Timmer in the 20th and 25th minutes, respectively, kept the home side at bay.

In the 27th minute, Eleven midfielder Aboubacar Sissoko was put inside the area by Patrick Seagrist’s through ball down the left flank, but the Canadian’s attempt to catch 901 FC goalkeeper Brady Scott flat-footed was instead batted away. Perhaps the Eleven’s best chance to equalize came just after the half hour mark, when midfielder Ayoze achieved the left endline and sent a back post cross towards Manuel Arteaga, who saw his header across frame again pushed away by Scott.

Indy rued that missed chance immediately, as Memphis scored just seconds later on a swift counter that ended with Kyle Murphy sweeping a shot inside the left post that gave the striker his 20th goal of the season and 901 FC a 2-0 lead. The visitors tried to claw one back late in the half through a half-chance volley by Timmer from 20 yards that couldn’t dip in time to test Scott once more. While the opening half saw the Eleven out-shoot Memphis by an 8-7 margin and finish even on shots on target with three apiece, Indy entered the break down two tallies and in search of answers.

The proceedings did not improve for Indiana’s Team coming out of halftime, and Kissiedou again played provider to put things out of reach in the 56th minute. The Ivory Coast native’s chip put Andre Fortune into the right side of the area, from where he lofted a ball over Farr and inside the back post to move the score to 3-0, despite vehement protests from the Indy defensive corps that the offside flag should have been raised on the set up.

Indy pressed forward despite the deficit, with Ayoze setting the tone until the end. In the 63rd minute, the Spaniard nearly got one back with a low shot from 25 yards out that almost brushed the outside of the right post as it slid just wide. In the 71st minute, the captain played a looping ball for Arteaga that the Venezuelan laid into the path of substitute Nick Moon, who couldn’t keep his curling effort on goal.

Arteaga exited the match in the 76th minute, but not before he became just the third field player in club history to appear in every regular season match during a normal length campaign (not including last year’s COVID-shortened season), joining Don Smart (2014) and Tyler Gibson (2019) on that short list. Arteaga finished the season as the team’s leading scorer with 10 goals, making him just the fifth different player to register double-digit tallies in a single season for the Boys in Blue.

Ayoze kept the service coming in the 77th minute, his set piece inside the area finding an open Timmer for a half-shot/half-cross that just missed connecting with defender Tobi Adewole as he crashed the back post. Ayoze went the full 90 in finishing out his fourth season with the squad, and his club-leading five assists made him 4-for-4 in topping Indiana’s Team either solo or shared in the category – and also improved his club-record to 21 assists.