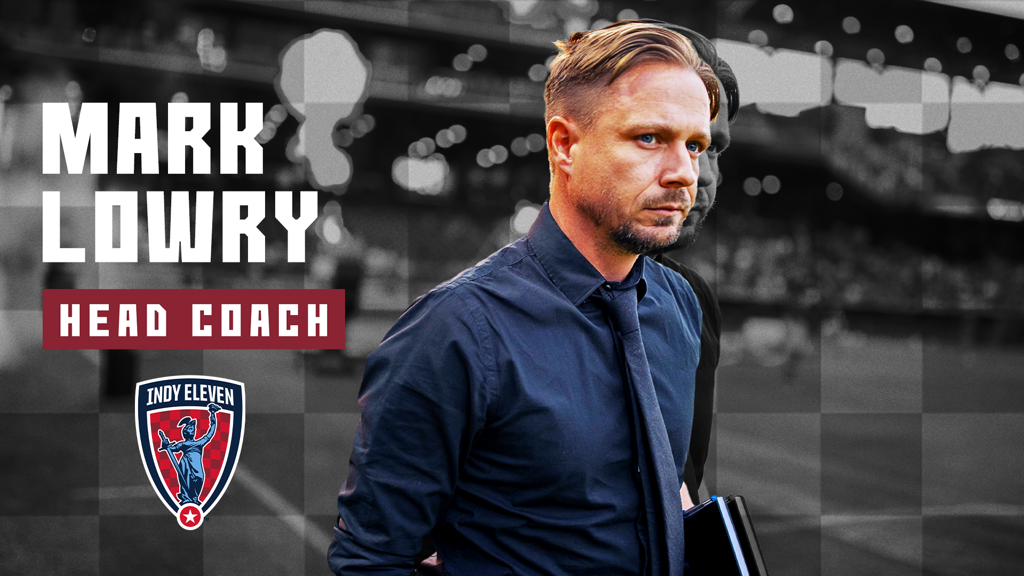 INDIANAPOLIS – Indy Eleven secured a sideline leader for the future with today’s announcement of Mark Lowry as the fourth permanent head coach in club history. Lowry, one of the USL Championship’s most successful coaches since joining the league in 2019, has already begun his duties on behalf of Indiana’s Team and is expected to arrive in Indianapolis on Wednesday.

“In Mark Lowry, Indy Eleven has found a coach who will be as passionate about connecting with and contributing to our community as he will be to strengthening our club on the field,” said Greg Stremlaw, Indy Eleven President and Chief Executive Officer. “While still a relatively young coach, his impressive results speak volumes both as a tactician and a leader, and we cannot wait to see those traits put into action.

“We believe the process of finding our next head coach was worth the considerable due diligence taken in recent months, which involved interest from more than 250 candidates from across the soccer world. We firmly believe in Mark’s ability to again make Indy Eleven one of the elite USL Championship competitors on the field and burnish our credentials as one of the league’s premier organizations,” Stremlaw concluded.

Lowry lands in the Circle City after a three-season stint with El Paso Locomotive FC, which he guided to a 42W-19L-29D record in USL Championship regular season, USL Championship Playoffs, and Lamar Hunt U.S. Open Cup action from 2019-21. The 36-year-old native of Birmingham, England, improved Locomotive FC’s record across each of their first three seasons of play, the first two of which culminated in back-to-back appearances in the Western Conference Final. Lowry’s 40 regular season victories over those three years rank as the fourth most amongst USL Championship coaches across that span.

“I want to put on record my sincere gratitude to El Paso Locomotive FC for the last three years. I had a wonderful time and will always be thankful for what they gave me,” said Lowry. “Looking forward, it’s an honor to be named Head Coach of Indy Eleven. It’s a club with an impressive history and one I’m familiar with dating back to the NASL days.

“I’m excited for the challenge of getting the club back to where it belongs, fighting for championships and towards the top end of the table,” continued Lowry. “It’s what this fan base deserves, and you have my word I’ll work hard every single day to instill a winning culture and a culture of high standards that embody what it means to represent Indianapolis and the Eleven brand.”

During El Paso’s recently concluded 2021 campaign, Lowry led Locomotive FC to an impressive 18W-4L-10D (64 points) ledger that easily clinched the Championship’s Mountain Division title and marked the third highest point total across the 31-team league. Lowry earned the July 2021 USL Championship Coach of the Month honor, which coincided with the club’s 23-game home undefeated run that stretched over a calendar year and was, at one point, the longest such streak in North American professional soccer.

Prior to El Paso, Lowry became familiar with Indy Eleven as a member of the Jacksonville Armada FC coaching staff. Lowry began his head coaching career as the interim boss of the then-NASL side in August 2016 before a positive run of results helped him shed the interim tag by that October. Following the 2017 NASL season, Lowry stayed on to lead Armada FC during their 2018 season in the NPSL’s Sunshine Conference before moving to USL Championship circles as the first head coach of El Paso Locomotive FC.

Lowry also spent four seasons in the Orlando City SC organization, spending time with both their Academy system and U-23 entry in the then-USL PDL (now USL League 2). Prior to Orlando, Lowry gained extensive experience as a player, academy coach, and scout in the English professional system. Lowry was a player scout and academy coach for English Premier League (EPL) side Wolverhampton Wanderers FC in 2009 and a player scout for Birmingham City FC in 2007 and 2008, also then in the EPL. He currently holds his UEFA “A” coaching license.

With Lowry now settling into his new position, Indy Eleven expects to make announcements surrounding its 2022 roster and coaching staff in the coming weeks.