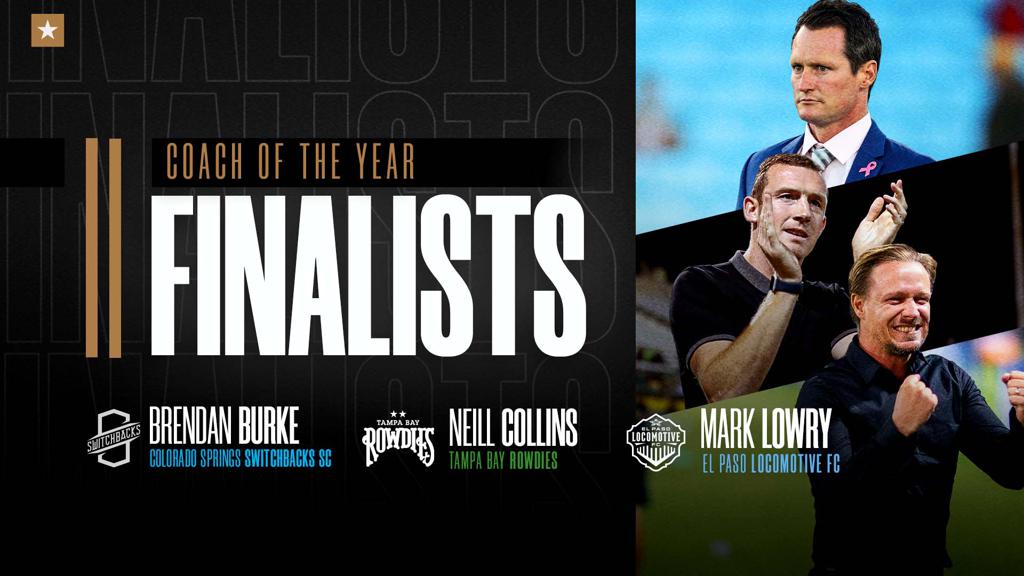 INDIANAPOLIS – The USL Championship announced on Tuesday the finalists for the 2021 USL Championship Awards, with the leading performers in five categories earning nomination after a compelling 2021 campaign.

Among the nominees in the Coach of the Year category is new Indy Eleven Head Coach Mark Lowry, who joined Indiana’s Team one week ago after concluding a third successful season at the helm of El Paso Locomotive FC. Lowry joins Brendan Burke (Colorado Springs Switchbacks FC) and Neill Collins (Tampa Bay Rowdies) on the three-man shortlist of finalists, with the winner to be announced this Saturday, Nov. 27.

During El Paso’s recently concluded 2021 campaign, Lowry led Locomotive FC to an impressive 18W-4L-10D (64 points) ledger that easily clinched the Championship’s Mountain Division title and marked the third highest point total across the 31-team league. Lowry earned the July 2021 USL Championship Coach of the Month honor, which coincided with the club’s 23-game home undefeated run that stretched over a calendar year and was, at one point, the longest such streak in North American professional soccer.

The 2021 USL Championship Awards were voted on by team management and a league-wide media panel that included representation from every USL market. The five award winners will be announced between Friday, Nov. 26 and Wednesday, Dec. 1.

Four Awards Finalists are set to feature in the 2021 USL Championship Final between the Tampa Bay Rowdies and Orange County SC, which will air live on ESPN, ESPN Deportes and SiriusXM FC in the United States on Sunday, November 28 at 8:30 p.m. ET.

Mark Lowry, El Paso Locomotive FC: After leading Locomotive FC to consecutive Western Conference Finals in its first two campaigns, Lowry produced the best regular season in the club’s short history in 2021 as El Paso lost a league-fewest four games in the regular season while finishing second in the league with 13 shutouts. El Paso won the Mountain Division and finished with the third-best record in the league overall while going undefeated at home, equaling the league record with 13 home victories in the regular season.

Brendan Burke, Colorado Springs Switchbacks FC: Appointed last offseason as the third Head Coach in Switchbacks history, Burke led the side into its new era at downtown venue Weidner Field with a side that provided high-quality entertainment on the field and earned the club’s first postseason berth since 2016. Colorado Springs ranked third in the Championship with 60 goals and tied a club record with 49 points as it almost doubled its point total from the 2019 season.