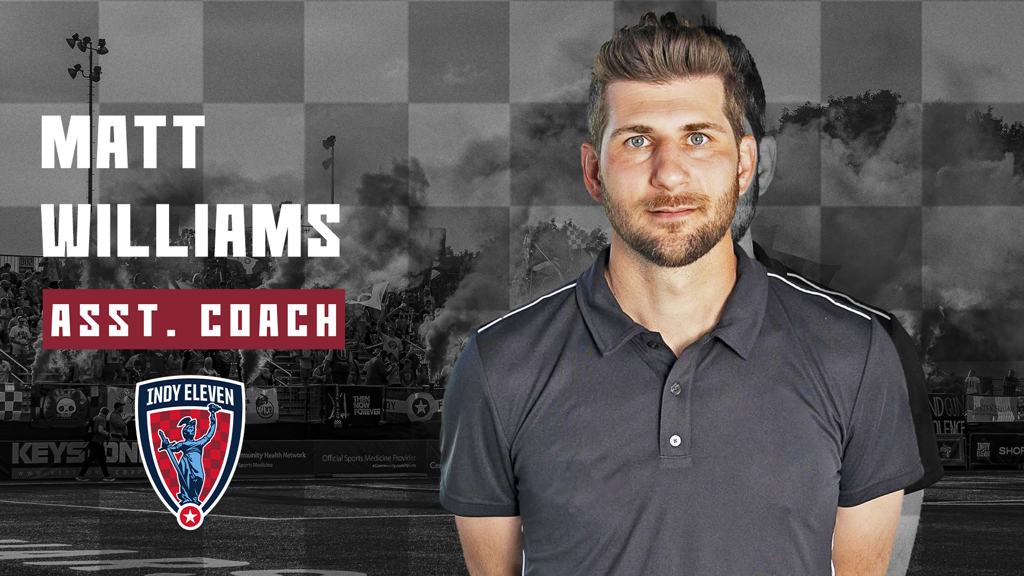 INDIANAPOLIS – Indy Eleven Head Coach Mark Lowry will have a familiar face on the sideline during his upcoming first season in the Circle City after today’s addition of Assistant Coach Matt Williams to his Technical Staff.

The addition of Williams highlights recent changes to the Eleven’s team side staff that include the departures of Head Athletic Training Meeja Kinsey MS, LAT, ATC; Strength and Conditioning Coach Sam Joyce; and Assistant Coach Max Rogers. Indy Eleven anticipates confirming additional updates to its Technical Staff make-up in the coming weeks as the start of the squad’s 2022 preseason at Westfield’s Grand Park approaches in February.

“I cannot wait to hit the ground running with Mark and the rest of the staff and players to get prepared for the upcoming season,” said Williams, whose duties with the club will begin immediately. “I’m looking forward to some unforgettable nights and memories in front of a packed Carroll Stadium with the best fans in the country. I know the club is hungry to win championships and trophies and that’s exactly what we’ll do.”

Lowry is no stranger to Williams, who worked on the staff of the new Indy sideline boss at both of his previous stops at El Paso Locomotive FC from 2019-21 and Jacksonville Armada FC between 2017-19. At both previous locales, Williams assisted Lowry with First Team coaching and video analyst duties and also gained head coaching experience in the organizations’ respective youth ranks. Williams has earned his USSF “A-Senior” License from the United States Soccer Federation and “UEFA B” license from the Scottish Football Association, and is in the process of finalizing his “UEFA A” License from the SFA.

“I am incredibly happy to be bringing Matt to Indy Eleven. He understands with complete clarity the way we want to work and what we expect from individuals in our high-performance environment,” explained Lowry. “The relationship we have on and off the field, coupled with his work ethic and the trust I have in him makes my job, and the jobs of those around him, a lot more enjoyable. Having Matt onboard makes this club stronger and will no doubt get us closer to our objectives of winning and building a culture of high standards.”

Williams received his Master of Science with a concentration in soccer coaching from Ohio University in 2015, which overlapped with a first collegiate head coaching stint at Huntingdon College in Montgomery, Ala. (2013-15), and was followed by two years as an assistant with the University of Memphis (2015-17). Williams also gained sideline experience as head coach of the National Premier Soccer League’s (NPSL) Memphis City FC (2016) and as an assistant with his undergraduate alma mater of the University of West Florida (2009) and the Gulf Coast Texans in the Women’s Premier Soccer League (WPSL).

Williams playing days included representing both the University of North Florida and the University of West Florida in the late 2000’s, the latter of which included an all-conference selection following the 2008 season.  The San Diego-born and Pensacola, Fla.-raised Williams went on to play in the United Soccer Leagues with Panama City in the Premier Development League and later with Real Maryland in the USL 2nd Division before wrapping with an overseas journey to suit up for Team Wellington in New Zealand’s ASB Premiership.

Indy Eleven will begin its ninth season of play, and fifth season in the USL Championship, in 2022. Season Ticket Memberships for Indy Eleven’s 2022 campaign are now on sale – with one of the numerous benefits including complimentary tickets for the club’s inaugural USL W League season. Fans can also place deposits to secure discounted tickets and exclusive gameday experiences for groups of 10 or more and one of the many Premium Hospitality options at Carroll Stadium. To learn more and lock in your seats, visit indyeleven.com/tickets.