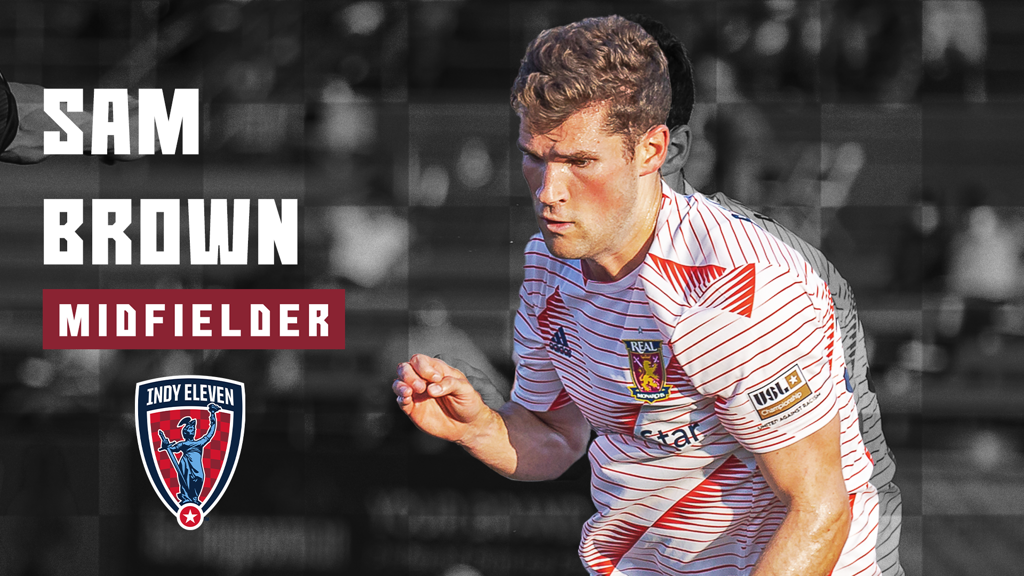 INDIANAPOLIS – Indy Eleven continued to add to its 2022 USL Championship roster with today’s addition of midfielder Sam Brown to Indiana’s Team. The signing of the Ann Arbor, Mich.-native is pending league and federation approval; per club policy, contract terms will not be made public.

“I’m thrilled and grateful for the opportunity to join Indy Eleven,” said Brown. “Having played against the club last year and knowing Coach Mark Lowry from his time in El Paso, it was an easy call for me sign with Indy. I’m looking forward to meeting everyone and getting to work!”

Brown joins the Boys in Blue after three seasons in the USL Championship with Real Monarchs SLC, where he notched one goal and two assists in 47 appearances (39 starts) while patrolling the central midfield. Brown was selected by the Monarchs’ Major League Soccer parent club, Real Salt Lake, in the first round (17th overall) of the 2019 MLS SuperDraft out of Harvard University.

“I saw plenty of Sam as an opponent over the last three seasons, and I am confident he can be an important contributor for us immediately,” said Indy Eleven Head Coach Mark Lowry. “Sam’s intelligence with the ball and athletic ability both lend well to his role in the center of the field, and his competitive spirit will fit in quite well with how we are constructing our roster for 2022.”

As a rookie, Brown was a heavy late-season contributor to the 2019 Monarchs side that captured that year’s USL Championship title, making six of his eight regular season appearances – including all four starts – across their final seven games, in which the Monarchs went 4-1-1 in to solidify a Western Conference Playoffs berth. His growing contributions for SLC peaked in 2021, when he started 21 of 23 games, led Real in tackles (53) and tackles won (32), and finished second in passing percentage (83.8%), third in total passes (901), and tied for fifth in clearances (24) and aerial duals won (27).

Prior to turning professional, Brown was a standout at Harvard, where he posted three goals and 12 assists for the Crimson in 62 games. The 2014 Ivy League Rookie of the Year was a two-time All-Ivy League Second Team performer on the field, while in the classroom he completed his studies with a Bachelor’s Degree in Mechanical Engineering.

Indy Eleven will continue to make additional announcements surrounding its roster and coaching staff leading up to the 2022 preseason beginning in February. Following is the club’s 2022 roster as it currently stands:

Season Ticket Memberships for Indy Eleven’s 2022 campaign are now on sale – with one of the numerous benefits available including complimentary season tickets for the Eleven W League squad’s inaugural season. Fans can also place deposits to secure discounted tickets and exclusive gameday experiences for groups of 10 or more and one of the many Premium Hospitality options at Carroll Stadium. To learn more and lock in your seats in 2022, visit indyeleven.com/tickets.