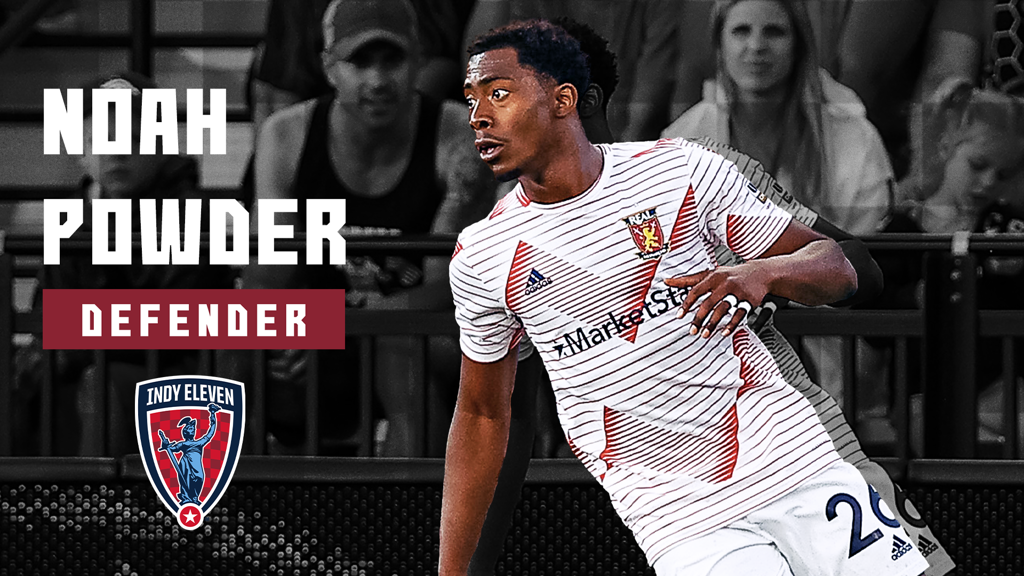 INDIANAPOLIS – Indy Eleven’s build-out of its 2022 roster continued with today’s signing of Trinidad & Tobago international defender Noah Powder. Per club policy, terms of the contract that brings Powder to Indiana’s Team following a season with Major League Soccer’s Real Salt Lake will not be released; the signing will be finalized pending league and federation approval.

“Once interest came to my attention from Indy Eleven I was immediately intrigued,” said Powder. “I really feel like Coach Mark Lowry’s style of play best suits the way I see and play the game. I’m excited a deal could get done and I’m ready to get to work for the 2022 season.”

Powder, 23, brings six seasons of professional experience to the Boys in Blue, including title-winning seasons in the USL Championship with Real Monarchs SLC (2019) and New York Red Bulls II (2016). Powder split his 2021 campaign between Monarchs SLC and their MLS parent club Real Salt Lake, where he started in two of his seven appearances in regular season action.

“For me, Noah Powder is one of the best left backs outside of MLS and has been for the past couple of seasons,” said Lowry, whose teams faced Powder five times since 2019 while at the helm of El Paso Locomotive FC. “He has had, and still has, a lot of MLS interest, so to get him to Indy Eleven shows the intent of this club and where we want to be.”

In his six seasons of play in the USL Championship, the native of Edison, N.J., has collected 11 goals and nine assists in 103 combined regular season (96) and postseason (7) affairs. After coming up through the New York Red Bulls Academy system, Powder made his professional debut at the age of 17 during a two-season stint at NY Red Bulls II from 2016-17, helping the squad to the top record in the Championship’s regular season in 2016 and a trophy-lifting finish to the playoffs that followed. After joining Orange County SC for their 2018 campaign, Powder got another taste of postseason glory in 2019, starting his three-year tenure at Monarchs SLC by figuring prominently in their title run, including scoring the final tally in a 3-1 victory over Louisville City FC in the Final.

Eligible to represent Trinidad & Tobago through his father born in Tobago, Powder represented the Soca Warriors 13 times in competitions at the U-17 and U-20 levels towards the start of his pro career before earning his first full senior team call up just under a year ago. Powder made six “caps” for T&T in 2021, several of which came in crucial contests alongside his new teammate, Eleven midfielder Neveal Hackshaw. After making his full international debut on Feb. 1, in a friendly against the United States, Powder appeared twice off the bench in CONCACAF region qualifiers for the 2022 FIFA World Cup last spring before starting two of his three appearances in the CONCACAF Gold Cup in July.

Indy Eleven will continue to make additional announcements surrounding its roster leading up to the 2022 preseason beginning in February. Following are the 14 players currently signed to the squad’s 2022 roster:

Indy Eleven’s full 2022 USL Championship schedule is now out, and fans can secure tickets for the 17 matches at Carroll Stadium – starting with the April 2nd home opener against LA Galaxy II – immediately via a 2022 Season Ticket Membership, discounted group tickets for parties of 10 or more, and one of the many Premium Hospitality options at Carroll Stadium. To receive ticketing details and lock in your seats at “The Mike”, visit indyeleven.com/tickets or call 317-685-1100 during regular business hours. Single-game tickets are expected to go on sale in early February.