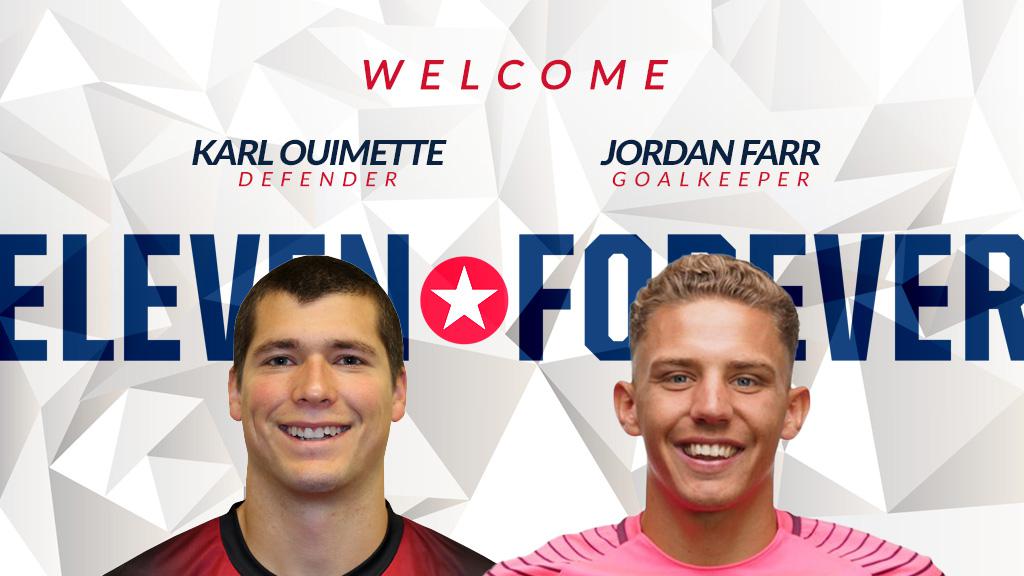 “Karl is a powerful and fast defender,” said Coach Martin Rennie. “But he’s also versatile, which is why I’m looking forward to trying him in multiple positions.”

"I’m excited to join Indy Eleven for the 2018 season. It’s a club that is very professional and has great ambitions,” said Ouimette. “The fans there are dedicated and will support us all year. I can't wait to start working with our experienced coaching staff to set the foundations for a successful season."

Ouimette excelled as a staunch defender at San Francisco Deltas last season appearing in 23 matches contributing on 10 shutouts. He won 78% tackles, 59% ground duels and 66% aerial duels. Ouimette also has extensive experience at the MLS and international levels. A starter along the backline in 10 of his 18 appearances for the Canada National Team, he also represented his country at the 2015 CONCACAF Gold Cup.

Farr was a standout goalkeeper for the record-setting 2016 Warrior team that advanced to the NAIA National Tournament Round of 16 for the first time in program history. He ranks number two all-time in the NAIA with 44 career shutouts, tallying nine during his senior campaign and owns a career goals-against-average of 0.74.

“I’m excited to see what Jordan will accomplish with Indy Eleven,” said Coach Rennie. “He’s a top goalkeeper in the NAIA and I would rate his experience just as high as any.”

"Being a professional soccer player has been my dream since I was able to walk,” said Farr. “To be playing in front of the Brickyard Battalion at Lucas Oil Stadium will be an absolute privilege and an honor. I was able to meet Martin Rennie when he spoke at my University, and I couldn't think of a better coach to play for and learn from. I am humbled and extremely grateful to play for Indy Eleven and represent the city of Indianapolis."