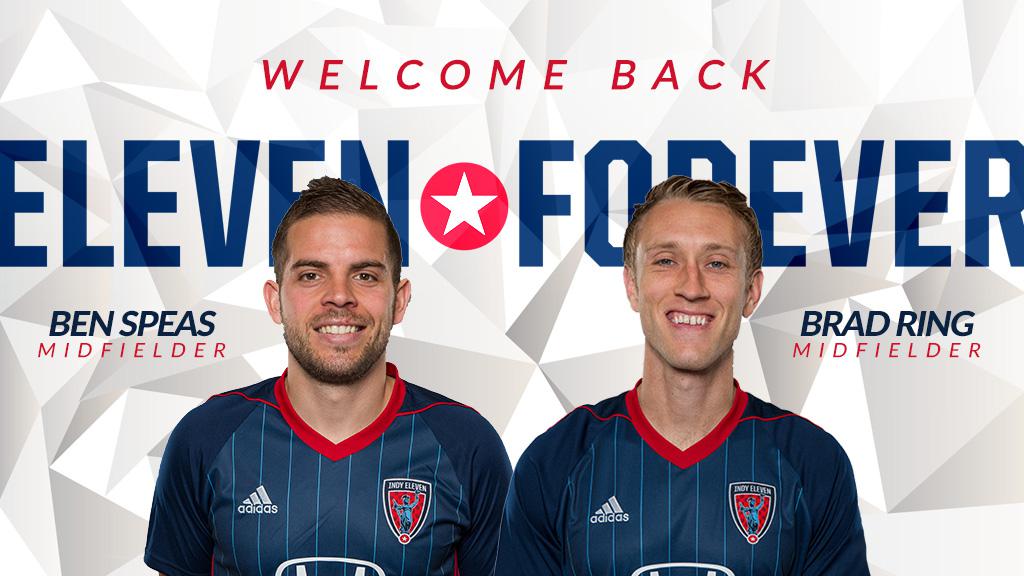 Indy Eleven Professional Soccer is announcing the signing of both Brad Ring and Ben Speas to its 2018 roster pending league and federation approval. Ring has been with Indy Eleven every campaign while Speas joined the roster in 2017.

“I’m very happy to announce the signing of Brad Ring and Ben Speas,” Indy Eleven Head Coach Martin Rennie said. “Brad’s quality play on the pitch and his leadership in the locker room can help us quickly build a unified squad with so many new faces. Ben has a creative flair in his middle attacking role that I first observed coaching him years ago and I believe will be further enhanced with the new set of players he’s surrounded with.”

Ring has improved his stats each year and 2017 saw him play in 29 matches where he displayed outstanding distribution skills with 91% passing accuracy in the defensive side and 70% passing accuracy in the attacking side finishing with one goal and one goal assist. “I’m excited to be included in the next chapter of Indy Eleven under Coach Rennie and I know our fans will love the new dynamic style of play he plans to implement.”

Speas appeared in 27 matches last year which included 4 goals and 5 goal assists. His passing accuracy was also stellar with 84% in the defensive side and 67% in the attacking side. “It’s a thrill to be playing in front of the best soccer fans in North America and at a first-class new venue.”

Per club policy, terms of the contract for any player with Indy Eleven will not be released.