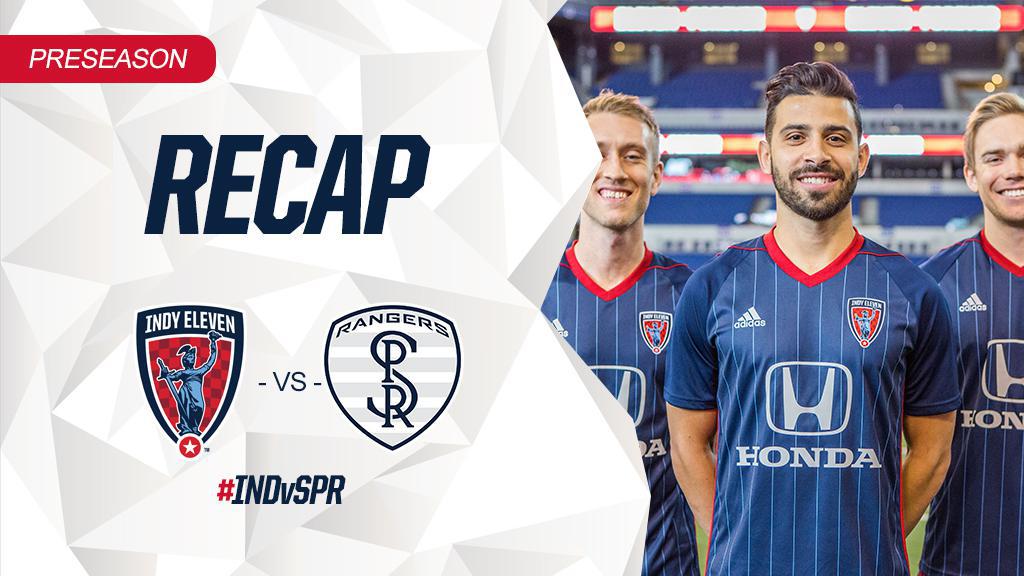 The “Boys in Blue” took charge of the match in the opening minutes after Starikov netted a penalty in the 5th minute of the match. Indy Eleven forward Soony Saad charged into the Rangers’ box mostly uncontested until being brought down moments before firing off a shot, leading the official to point to the spot. Thereafter, Starikov came up to the ball with a slow, staggered approach, to slot the ball into the lower left corner of the goal and bring the lead to 1-nil.

Swope Park Rangers attempted to respond nearly six minutes later. In the 11th minute, SPR went on the offensive, charging into the top of Indy’s box. The attack was short lived as Indy Eleven defender Brad Rusin was quick to deflect and neutralize SPR’s offensive efforts.

Moments later, a shot from McInerney came close to widening Indy’s gap. In the 14th minute, McInerney found himself feet in front of SPR’s goal. Sadly, SPR’s goaltender quickly scrambled to deflect McInerney’s strike out of play, keeping the “Boys in Blue” up by a single goal.  Another attempt came in the 30th minute when Indy Eleven Kevin Venegas found himself alone in the top-right of SPR’s 18-yard box. Venegas attempted to send the ball to the back of the net, but the lack of power allowed the Rangers’ keeper to calmly collect and restart play.

After creating several chances, Indy finally tallied their second goal in the dying moments of the first half. In the 44th minute, Starikov was on the receiving end of a cross directly in front of SPR’s box. The headed ball ultimately found its way to the top left corner of the goal, securing Starikov’s brace and the winning goal for the evening.

Onto the 60th minute, Indy Eleven made wholesale changes to its lineup in fielding 11 pairs of fresh legs. After the change, the game became contained to the midfield as the new players worked to find their pace.

The highlight in the second half for the “Boys in Blue” came in the 75th minute when forward Justin Braun returned to the pitch for the first time since his season ending injury late in 2017.  Though he was only fielded for 15 minutes, Braun’s return was an important milestone in his rehabilitation efforts.

In the final moments of the match, “Boys in Blue” defender Reiner Ferreira picked up the one and only yellow card of the match after a hard challenge on an SPR defender in the visitor’s half.

90 minutes came to pass and Indy claimed their first win and clean sheet of the 2018 preseason. The performance was a solid training exercise according to Indy Eleven head coach Martin Rennie. “We played well,” Rennie said. “We created a lot of chances and defended in a solid way. I was happy that we looked organized and dominated a lot of the game.”

Next up, Indy Eleven returns to action as they take on Notre Dame Men’s Soccer team at Butler University this Saturday, March 3rd, at 2:30 p.m.

Don’t miss out on any of the action in 2018. You can save up to 48% when you purchase a 2018 Season Ticket package; that’s like buying 9 tickets and get 8 FREE. Click here for more information.