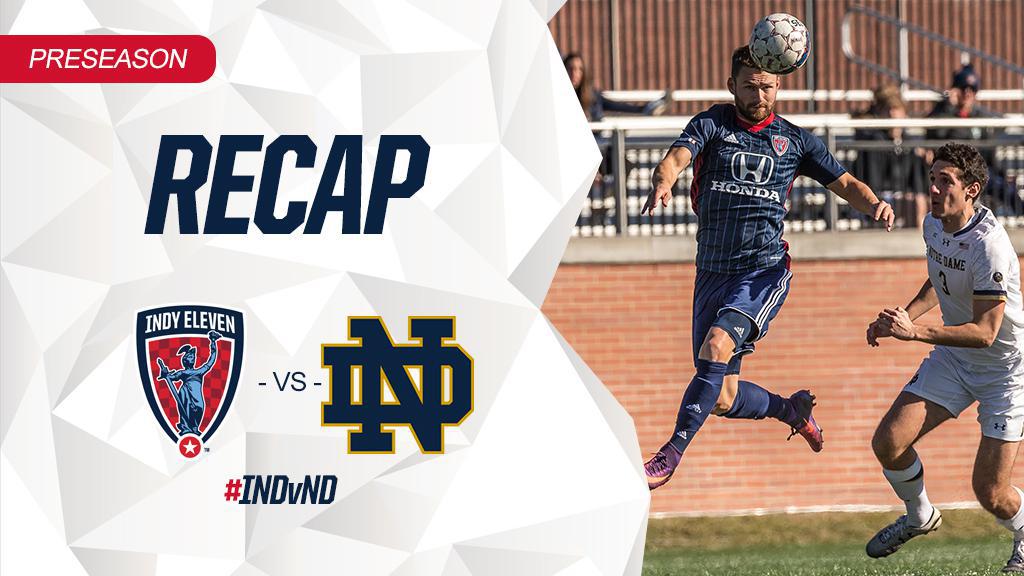 Indy Eleven cruised to its second preseason win over Notre Dame Men’s Soccer team in a 3-1 victory over the college side. Goals from an Indy Eleven trialist, Jack McInerney and a Notre Dame own goal bring the “Boys in Blue” to a 2W-0D-1L preseason record.

The “Boys in Blue” opened the action soon after the match started. In the 3rd minute, Indy Eleven midfielder Brad Ring found himself in a playmaking position after a cross into the top of the “Fighting Irish’s” box. Unfortunately, the cross ended just short of one of Indy’s trialist and into the arms of Notre Dame’s keeper.

The visitors were quick to turn and switch the player just three minutes later. In the 6th minute, Notre Dame ran the ball into the left of Indy’s 18-yard box. The attack was short lived as Eleven midfielder Seth Moses headed the ball back up the pitch.

In the next minute of play, Indy found themselves in the lead after a mixed line of communication between Notre Dame’s defender and goaltender. In the 7th minute, Felicien Dumas was forced to pass the ball back to his team’s keeper as Indy’s attack closed in, but mixed signals led to the pass missing its mark and landing in the back of the net. This marks the second time that Indy has taken the lead within the first 10 minutes of the match.

Much of the half wore on without either team seeing any significant chances. But, in the 32nd minute, Notre Dame began to ask questions when an attacking players forced their way deep into Indy’s 18-yard box. ND’s attacker struck the ball just outside of the 6-yard box, but “Boys in Blue” keeper Owain Fon Williams stepped up to the challenge and sent the ball out of play. Indy responded four minutes later when XI midfielder Zach Steinberger fought his way through three ND players to attempt a shot from outside their keeper’s box. Sadly, the shot flew just inches over the crossbar and out of play, awarding Notre Dame a goal kick.

Indy’s lead came to an end six minutes before the end of the first half. In the 39th minute, Notre Dame took the lead after one of their players weaved through Indy’s defensive line along the right side of the goal. From inside the box, the Notre Dame player made a pass back towards the middle of the box where his teammate was waiting. The pass was quickly converted in to a goal, bringing the score level before the end of the half. Notre Dame nearly took the lead in the 42nd minute when a strike from one of their own deflected high into the air off of Fon Williams’ hands, but Moses was quick to Fon Williams’ aid and cleared the ball from play.

The second half started out strong from Notre Dame as they came close to taking the lead once again. In the 52nd minute, Notre Dame fired off a grounded shot from within Indy’s 18-yard box, but the fresh-legged trialist manning Indy’s goal was quick to stop and collect.

The “Boys in Blue” found the lead once more in the 60th minute. The ball found its way off the foot of one of Indy’s trialist while a large group of players crowded the inner 6-yard box in Notre Dame’s half. Seconds later, Indy made wholesale substitutions that swapped out most of the team with fresh legs.

The match continued with head-to-head action seen on both sides of the pitch, but each attempt at goal ending fruitless for both sides. But in the 89th minute, the match official pointed to the penalty spot in Indy’s favor after a handball was called on a Notre Dame player in his team’s box. Jack McInerney stepped up and calmly collected his first preseason goal and tallied the team’s third goal of the match in the 90th minute. This marks the third consecutive match in which Indy has scored off a penalty kick.

After a minute of stoppage time, the whistle blew and the “Boys in Blue” walked away with their second consecutive win. With just 12 days total of training under the team’s belt, Indy Eleven head coach Martin Rennie is starting to see the squad’s abilities taking shape. “I thought that we were in control for almost the whole game,” said Rennie. “There was a 15 minute period at the end of the first half where we lost our shape a little bit, but other than that I thought we played really well. I’m happy that we scored three goals and that we defended well, and also that we didn’t see anyone injured.”

Indy Eleven return to the pitch next weekend in two back-to-back fixtures in Chicago. On Saturday, the “Boys in Blue” will take on Bridges FC. The next day, Indy will return to face MLS’ Chicago Fire. Both matches will be closed to the public and streams will not be available.

Don’t miss out on any of the regular season action. Season Ticket packages and individual game tickets for the 2018 Season are now available. Click here to explore all of your ticketing options.