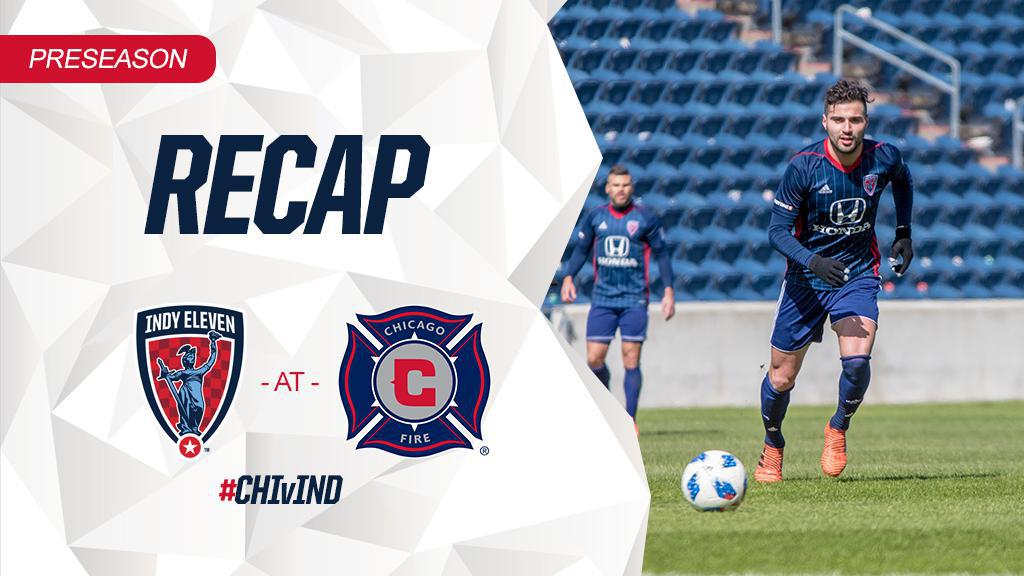 Indy Eleven find winning ways once again in preseason after a 2-0 victory on the road against MLS’ Chicago Fire early Sunday morning. First half goals from “Boys in Blue” forwards Soony Saad and Eugene Starikov, as well as massive saves from goaltenders Owain Fon Williams and an unnamed trialist, sees Indy remain undefeated in the last four preseason friendlies.

While pleased with the result, Indy Eleven head coach Martin Rennie continues to stress the purpose of today’s match wasn’t necessarily to win, but to build fitness. “It was another good training game for us,” Rennie said. “Most of our players played 90 minutes. I think towards the end of the game, we [the players] were getting a little bit tired. But for most of the game I thought we played really well. We had good possession, scored good goals, created good chances and defended well throughout the game. I’m very pleased with where we’re at in this stage of our preseason.”

The scales tipped in Indy Eleven’s favor early on in the match. Eleven forward Jack McInerney ran in along the top right of the Fire’s 18-yard box. Coming in one-on-one with one of Chicago’s defenders, McInerney pivoted to the left around the Redman to fire off a shot. McInerney’s attempt as deflected by Fire goalkeeper Stefan Cleveland to the left of the goal when “Boys in Blue” striking partner Saad capitalized on the opening, sending the ball into the goal shortly after the clock ticked into the 11th minute.

It wasn’t but seven minutes later when McInerney found himself in a similar position. McInerney came running in the top right of Fire’s box once again, but this time he attracted the attention of two Fire defenders instead of the previous one-on-one play. Unable to make the shot as he approached the center of the goal, McInerney sent a short pass to the left where it met the feet of XI forward Starikov. Without hesitation, Starikov hammered his shot out of Cleveland’s reach and into the top right corner of Chicago’s goal posts, widening Indy’s leading gap 2-0 in the 18th minute.

Although the Fire’s attack pressed hard the entirely of the first half the first major attempt at goal didn’t come until the 44th minute. Chicago sent a lofty cross directly towards the center of Indy’s 6-yard box from the far left corner of the “Boys in Blue’s” half. Another Fire attacked leapt up and met the incoming ball with his forehead square in front of Indy’s goal. As luck would have it, Fon Williams was able to tip the header up over the crossbar and out of play, keeping Indy in a distant lead.

Fire entered the second half determined to close the gap Indy created in the first. In the 50th minute, several Fire players crowded Indy’s 18-yard box while fighting for possession. In the middle of the scuffle, Chicago sent a scrambled shot towards the bottom right of Indy’s goal, but Fon Williams was quick on his feet with a diving save to force the ball out of dangerous territory. Fon Williams continued to collect as more attempts came his way for another 26 minutes before being substituted for an unnamed trialist for the remainder of the match.

The first test for the trialing goalkeeper and arguably Chicago’s best chance at a goal came just moments after Fon Williams came off. In the 77th minute, Chicago was awarded a free kick at the top-right of Indy’s box, feet away from penalty territory. The Fire sent the free kick up and over the wall of XI players towards the center of the box and landing at the feet of one their teammates. After a quick touch, the home side players launched the ball towards goal, but the ball struck the outstretched arm of Indy’s fresh-legged keeper as he dove to successfully neutralize the attempt in the 78th minute.

The final whistle blew after a short spell of added time with both sides failing to find any goals in the second half. The “Boys in Blue” registered their second clean sheet of the weekend after a 0-0 draw against developmental side Bridges FC the day prior. So far, Indy holds a 3W-2D-1L preseason record, tallying a total of 8 goals over the last 5 matches. Starikov tops the preseason scoring list for the “Boys in Blue” with a total of 3 goal; he netted his first two in a brace against Swope Park Rangers in the second match of the preseason. Saad trails close behind Starikov with two goals under his belt. In third, Jack McInerney and an unnamed trialist are each tied with one goal. The last goal for the Eleven came from an own goal during their clash with Notre Dame last weekend.

Next Saturday, March 17, marks the Opening Weekend for the USL 2018 Season. Although your “Boys in Blue” won’t see any official action until March 24, they will continue their preseason with back-to-back home matches next Saturday against Indiana Wesleyan University and former foes Jacksonville Armada. Details on these matches will come later this week.

Looking for plans on March 31? Look no further. Click here to get your tickets to Indy Eleven’s 2018 Home Opener against regional rivals FC Cincinnati.