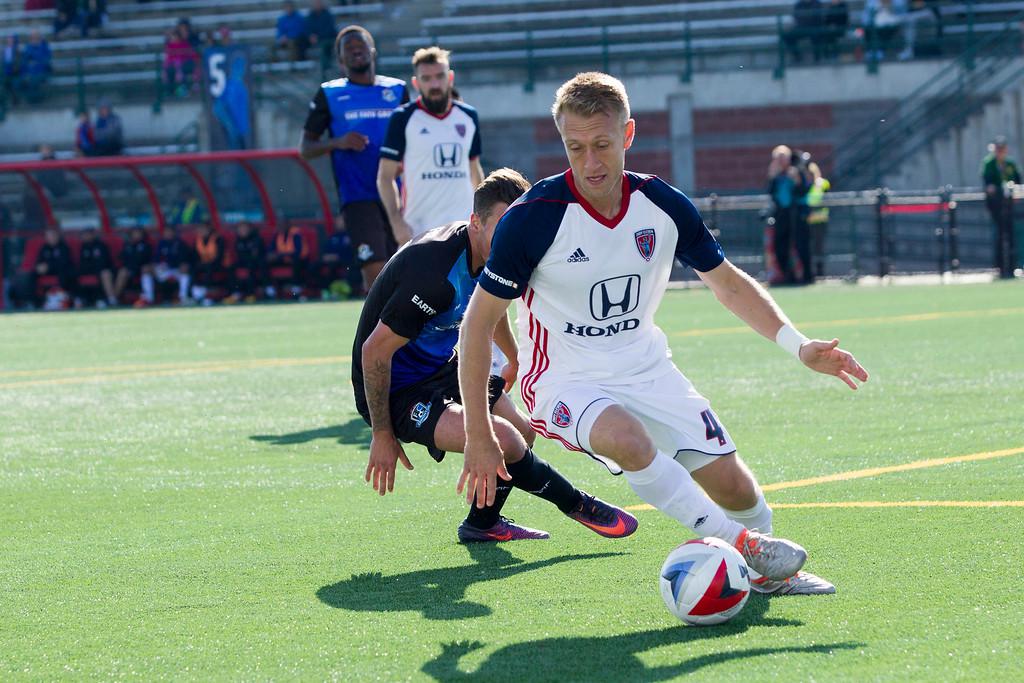 6,758 minutes. That’s how many regular season minutes Brad Ring has appeared on the pitch donning Indy Eleven’s crest over his heart. Ring, affectionately nicknamed “Legend” by the Brickyard Battalion (BYB), first joined Indy Eleven’s roster back in January 2014. Although joining Indy Eleven was new territory for him, the move was Ring’s return to the Hoosier state after his successful stint with Indiana University Men’s Soccer team from 2005-2008.

Back in 2014, “Indiana’s Team” was still growing—Indy Eleven had officially come into existence a year prior under the moniker “Indy Pro Soccer”; only a handful of players had been signed and most glaringly, the club hadn’t played a game. It was truly a fresh start for Ring, a seasoned veteran who had played for Major League Soccer giants Portland Timbers and San Jose Earthquakes in seasons prior. Some of the more dedicated fans would’ve known the Rockford, Illinois native from his MLS and college career, but for the rest, his name didn’t “ring” a bell.

Over the last five seasons, Ring has seen the Circle City club evolve: numerous teammates come and go; three head coaches, two assistant coaches; collecting the club’s first silverware in 2016 and suffering championship-falling heartbreak later that season. Through all the ebbs and flows, Ring remained the one constant. This consistency manifested itself in Ring’s role with the club slowly molding him into the leader that he is today.

“I have been fortunate to have so many amazing teammates over the last 4 years here in Indy,” said Ring. “Although it’s a bit sad that so many guys have gone different directions with their careers, it’s an honor to be the last remaining original member of the 2014 squad. My role has changed each year. Some years I have been more vocal and other years I have lead quietly by example. I have worn the armband a few times which is always an honor so it was special to be named vice captain this year to Matt Watson as team captain.”

A “leader” can be defined as “the person who leads or commands a group or organization”. Leadership is synonymous with experience, and experience is something Ring has a wealth of given the amount of times he’s dressed in his club’s colors. After coming on as a substitute in last Saturday’s 1-0 win against the Richmond Kickers, the midfielder inched closer to making his 100th appearance for Indy. Sitting at 95 caps [appearances] for his club, Ring is just games away from becoming the second player to register 100 appearances in Indy Eleven’s history, the first being former teammate and Indy original Don Smart.

According to Ring, there isn’t any magic to being selected. However, Ring leads by example by demonstrating proper fitness and personal upkeep to make himself eligible for play time each week.

“As you get older all the little things add up,” Ring explained. “I try to take care of my body as best as I can. Eating healthy with the help from King Cal meals, recovering properly, staying hydrated, etc., so that I can train and play to the best of my ability every time I step on the field.”

Off the pitch, Ring reprises his leadership role by becoming a role model in his community.  In 2016, he founded “Ring’s Reading Program”, a reading program geared towards helping elementary students improve their literary skills. The program initially debuted in schools within the Carmel, Indiana area, but quickly spread to education systems throughout the city. Inspired by numerous figures in his youth, Ring strives to grow his reading program as a way to give back to the community that has welcomed him with open arms.

“I’m very proud to have started ‘Ring’s Reading Program’ aimed at helping elementary school kids improve their reading, nutrition and living an active lifestyle,” Ring stated. “The idea transpired due to my desire to give back to the community. A lot of people inspired me when I was young so I feel the calling to do the same for today’s youth. We have received a lot of positive feedback from schools so the plan is to continue to visit schools to expand the impact of my program.”

It’s the ever-growing acts of selflessness in his community and the dedication to his teammates on the pitch that has drawn the eyes of so many supporters. As the saying goes, “Your small support could accomplish a big dream.” In the case for Brad Ring, the support he’s received from the BYB over the years has been anything but small. From 2014 to today, Ring has been a mainstay in both Indy’s lineup and the in the hearts of the club’s fans. Ring has found himself the subject of several fan-favorite moments, from innumerable stellar performances to the famous celebratory “beer chug” after clinching the 2016 Spring North American Soccer League Championship.

Indianapolis’ obsession with Ring became apparent earlier this year when the hashtag #BringBradBack made its round on social media just days before the championed midfielder re-signed with Indy Eleven. It’s these moments that have cemented Ring into the fabric of supporter culture, and the focus of their cheers and chants game after game.

“I have an enormous amount of respect for our fan base and specifically the BYB,” Ring said. “They welcomed me and my family from day one helping to make Indy feel quickly like home. They give everything they have for 90+ mins always pushing us to fight ‘til the end. I appreciate the love and support they have given me over the years. I hope they know how much it means to me, my family and the entire organization.”

While the club’s fan base has remained a constant, Indy Eleven has seen some wholesales changes in the last four years. It’s not every day a player finds themselves playing for a new head coach in a brand new league, but still playing for the same team they’ve been with for years. However, this is the reality for Ring. Facing a whirlwind of changes in such a small time frame can be daunting, but the ability for players to look past change and unite under a common goal is what makes them all the more admirable.

“The coaching staff has really developed a positive and supporting culture in their short time with the club,” Ring said. “I have no personal goals but just to enjoy the season and be the best teammate possible. Every team has a goal to make the playoffs and we are no exception. We have high hopes for the year even greater than that. We know the road won’t be easy but if we work hard and stick together, we have the talent and resources to do big things.”

Time wears on. Buildings rise and fall. Players come and go. Eventually, there will be a time in which Ring will say “farewell” to Indy Eleven and his supporters. Long after that times comes, though, fans will still remember his legacy. Until that day comes, Ring is here to stay, and Ring is here to win.