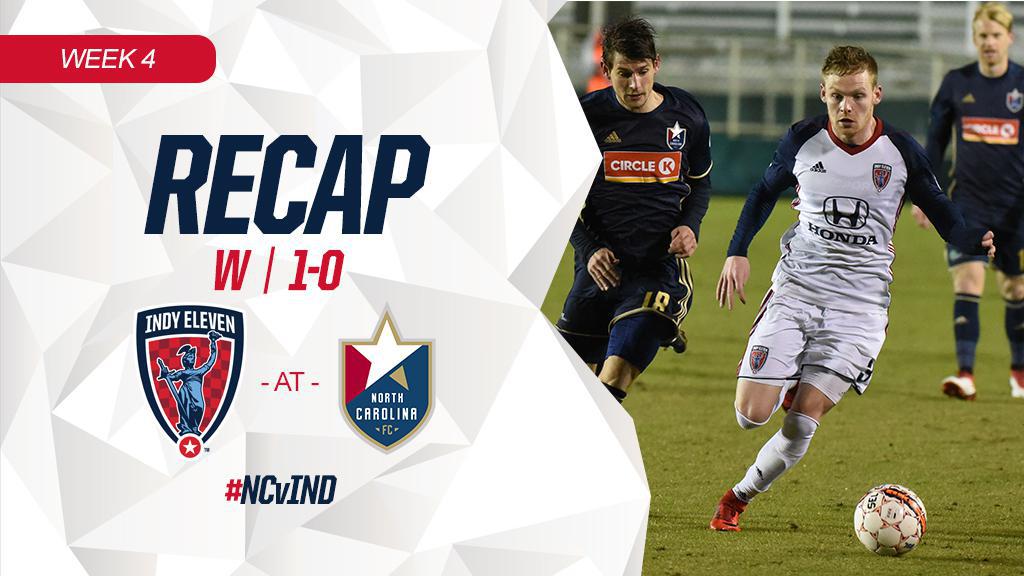 Indy Eleven collect three points on the road for the second time this season as they lead North Carolina to their third consecutive loss in a 1-0 victory. A lone goal from “New in Blue” midfielder Tyler Pasher in the first half and a massive save from veteran goalkeeper Owain Fon Williams from a penalty in second half stoppage time sees Indy Eleven register another win in their inaugural USL season on a cold, wet night in Cary, North Carolina.

The “Boys in Blue” get the first look in the opening moments of the match. In the 2nd minute, Eleven midfielder Nico Matern attempts to link up with forward Justin Braun in front of North Carolina’s goal from the left sideline. The pass to Braun looked clear before cutting between his legs during his fall from a tackle by NCFC’s Marcel Kandziora. The play ended when Carolina goalkeeper Alex Tambakis collected before charging XI forward Soony Saad could get another touch. Indy would continue asking questions before getting their next big chance minutes later.

In the 8th minute, Braun found himself in another goal scoring opportunity nearly 10 yards out from goal. A through pass towards the center of NCFC’s defending half from Eleven midfielder Nathan Lewis split almost most all of Carolina’s defense as Braun sprinted to track the ball down. As Braun got behind the ball, a slight touch from NCFC’s Aaron Guillen set the striker’s angle off kilter before winding back for the attempt. The ball flew from the right edge of the home side’s 18-yard box towards goal, but Tambakis flung his right foot out to nip the ball out and around the post. The attack died once again, but Indy’s time to shine was coming.

North Carolina began to ask questions of their own as Indy racked up their chances. In the 9th minute, NCFC’s captain Austin da Luz and midfielder Kyle Bekker found themselves around 10 yards from Indy’s goal while in possession of the ball. Da Luz cut a quick pass left to Bekker, but the NCFC newcomer took a heavy first touch and sent the ball out of play for a goal kick. It was this close call that pressured Indy to spring into the lead.

“Indiana’s Team’s” found their lead in the 15th minute. Braun carried possession towards the right side of NCFC’s keeper’s box before sliding the ball to the left across the wet turf to Pasher. Unopposed, Pasher registered his first Indy Eleven goal from just outside the top-left of Carolina’s box into the lower right goal post. The early lead would be contested several times throughout the night, but Pasher’s goal would eventually see Indy collect all three points.

North Carolina continued to look for an equalizer in the first half. NCFC forward Daniel Rios got his first of several chances in the 30th minute, after a quick turn and run away from Matern resulted in a shot from the top left of Indy’s box. The ball curved towards the center of the goal before smashing the crossbar and flying towards the stands for an Eleven goal kick. Rios got his second chance in the early moments of first half stoppage time. From the left corner, Bekker beamed the ball straight into the center of Indy’s box where Rios collected and fired his second attempt. And just like his first, Rios’ shot hammered into the crossbar once again, this time deflecting out and away from the goal.

The home team would find their next close call in the 70th minute following a series of quick passes. NCFC forward Donovan Ewolo invaded Indy’s 18-yard line followed by a back heel pass to defender Steven Miller. From there, Miller sent another quick pass to da Luz outside the left corner of Indy’s 6-yard box. Da Luz hit his shot at angle, but the only net the ball found was the side netting out of bounds. It was less than 10 minutes before Indy attempted to close out the match.

“Boys in Blue” midfielder Ben Speas found his first and only attempt at goal in the 78th minute. Eleven captain Matt Watson dribbled between NCFC defenders along the right goal post, sending a short pass to Speas in the 6-yard box. The Stow, Ohio native launched his shot at close-range, but Tambakis forced the ball back up the field. Indy looked as though they would coast to victory as the time ran down, but NCFC would get one final chance in the dying minutes of stoppage time.

NCFC was awarded a penalty kick in the 93rd minute after Rios was brought down just barely over the top line of Indy’s box by “Boys in Blue” defender Brad Rusin. Bekker stepped up to the spot and shot left, hoping to collect the equalizer and Carolina’s first USL point. However, Bekker’s hopes were dashed when Fon Williams read the midfielder’s kick and dove to keep the ball from finding the back of the net. Fon Williams quickly recovered and followed the loose ball out of play. It was just seconds later that the fourth official blew his whistle, signaling a win for the Circle City team.

It was a stellar night for the “Boys in Blue’s” defensive efforts. Defender Carlyle Mitchell’s ability to clear the ball reigned supreme after notching 10 clearances; defender Karl Ouimette “stole” the show with six interceptions; and defender Ayoze Garcia brought down the attack with four tackles to his name. In terms of moving the ball, no one surpassed Matern, who completed over four-fifths of his passes in during his 90 minute outing.