KEYS TO THE MATCH: NCvIND

Three takeaways from "Indiana's Team's" second win on the road 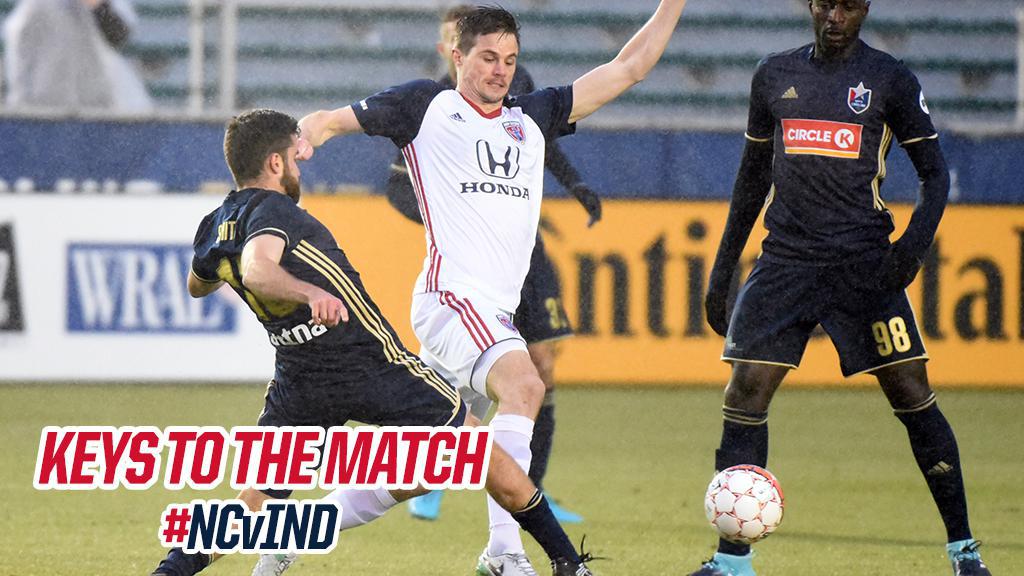 After every game in 2018, IndyEleven.com’s Drew Kamaski will give his three takeaways from the performance of the “Boys in Blue.” This week's edition comes after "Indiana's Team" registered another three points on the road against North Carolina FC.

Wales native Owain Fon Williams recorded his second clean sheet with the “Boys in Blue” in a 1-0 victory on a rainy Saturday night in North Carolina. Fon Williams secured the three points after stretching to save North Carolina FC midfielder Kyle Bekker’s penalty in the 93rd minute. The Welshman recorded three saves including the penalty and also saw the crossbar come to his rescue twice helping “Indiana’s Team” to keep NCFC from finding the back of the net. The clutch save is certainly a candidate for USL’s Save of the Week in Week 4.

This is Fon Williams’ first season with Indy Eleven, who’s on loan from Scottish Championship club Inverness Caledonian Thistle. The successful oil painter brings a wealth of experience to the “Boys in Blue” after accumulating 71 appearances with Inverness including the team’s first Europa League fixture. Fon Williams also appeared on the squad for Wales’ International team in the 2016 UEFA Euros, reaching the semi-finals of the tournament. Look for Indy Eleven’s man between the posts to bring success on the pitch, along with on the canvas.

A key piece to  Indy Eleven’s offense throughout the first three games has been Tyler Pasher’s influence on the left wing. His incredible pace and quick footwork make it difficult to contain the Newcastle United youth product. The Canadian International could be found making overlapping and darting runs down the wing against North Carolina FC, swinging in crosses and taking on defenders with his dangerous left foot.

Pasher’s speed down the wing freed him up in the 15th minute. Indy Eleven forward Justin Braun played a pass that led Pasher into to the box, who took one touch and slotted home a shot to the bottom right corner. Pasher’s first goal of the season secured three points on the road and saw “Indiana’s Team” jump to seventh place in the Eastern Conference.

Through his first three games, Pasher has influenced the game on both ends of the field netting one goal and completing three-quarters of passes played. Pasher is also yet to miss a tackle in the defensive third of the field, successfully completing all five defensive tackles.

“Boys in Blue” veteran Justin Braun is back in the starting eleven for the first time in a long time. The Indy Eleven forward was sidelined after he sustained a season-ending injury in August of last year. The start against North Carolina FC marks his first since the injury. Braun made appearances in “Indiana’s Team’s” first two games as a substitute, but found himself on the starting team sheet due to the suspension of teammate Jack McInerney.

Braun performed well in his first start assisting on the game’s only goal. The forward played a perfectly weighted, diagonal ball from the right side of North Carolina’s half that found the streaking Tyler Pasher on the left wing. Pasher’s first touch played him into the opposition’s box where he guided his shot past North Carolina FC keeper Alex Tambakis.

Braun was replaced in the 67th minute by Ben Speas after a strong first start. The assist is the 11th all-time with the “Boys in Blue” for Braun.

You can catch the "Boys in Blue" at home this weekend as they welcome fellow USL newcomers Nashville SC to Lucas Oil Stadium. Click here to claim your tickets to the 12:00 p.m. kickoff this Saturday, starting as low as $15.