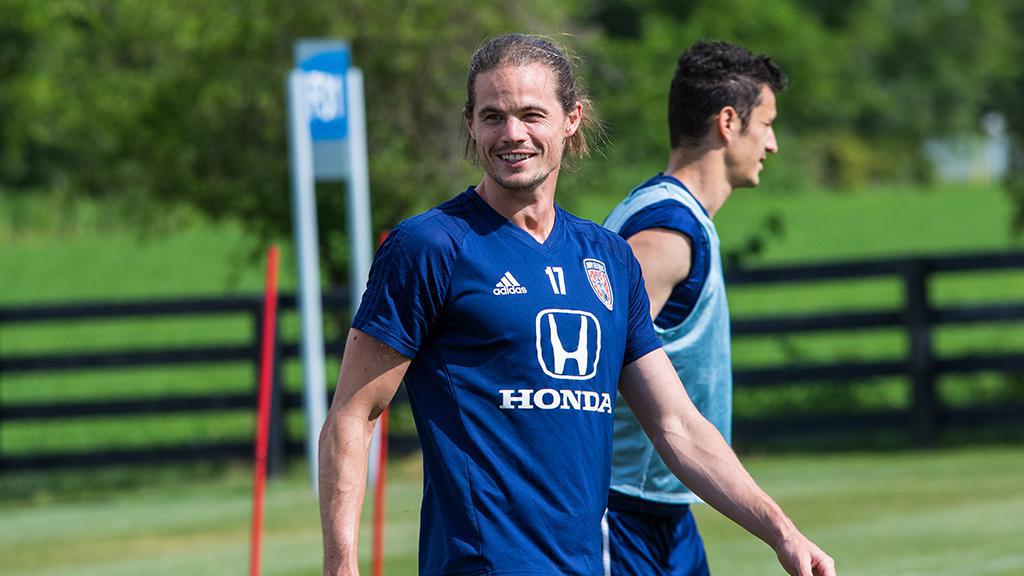 “It took a big toll on me mentally,” said Indy Eleven forward Justin Braun. “I spent a lot of hours doing therapy making sure I’d come back as strong as possible. I didn’t want this injury to end my career.”

Injuries are an inconvenience. Being bound to a bed or a wheelchair, or having to hobble around in a boot or crutches can often make the simplest task a taxing affair. But for professional athletes, such as Braun or “New in Blue” Brad Rusin, injuries of this magnitude can be far more than inconvenient – they can be career ending. And for both Braun and Rusin, this was almost a reality.

On August 26, 2017, Braun came on as a substitute in the 58th minute during Indy’s 2-3 defeat to former NASL rivals Jacksonville Armada. Though his interjection into the match showed an immediate impact assisting with Indy’s opening goal, the forward was playing on borrowed time from an existing ankle injury.

In the 75th minute, Braun’s time ran out.

While rounding a sharp turn around an Armada player, Braun distinctly remembers a popping and grinding sensation in his ankle before collapsing in sheer agony. This was the sound of his Deltoid ligaments tearing in his left ankle.

“As soon as the injury occurred I knew it was bad,” Braun recalls. “I heard a popping and cracking sound and assumed it was ligaments tearing and my ankle breaking. I didn’t want to look down at my ankle because I figured it wasn’t going to be a good sight. I figured my season was over and that’s why I was so emotional when it occurred.”

It wasn’t a pretty sight. Fans looked on for several minutes before the then-leading goal scorer was inevitably stretched off the field and rushed to the hospital with an air cast cradling his leg. It was there that medical staff narrowed treatment down to a single option: surgery. The severity of the injury left Braun’s ankle with no structural support on the medial (inside) side and cartilage so badly damaged that it wouldn’t heal on its own without micro-fracture surgery. Surgery was the only option, however, it wasn’t a guaranteed fix. Braun didn’t hesitate and opted to go under the knife.

Some injuries don’t happen immediately, but can develop overtime if pre-existing symptoms are aggravated; such was the case for Brad Rusin. The Crown Point, Indiana native joined former NASL 2017 Spring and Fall Season Champions Miami FC early on in 2016. Rusin was looking to expand his NASL career having spent short spells with Tampa Bay Rowdies (NASL at the time) and now-dissolved San Antonio Scorpions in the previous season. Unfortunately, injury woes struck before he could start for his new club.

During the 2016 preseason Rusin tore his medial and lateral meniscus, suffered multiple floating bone fragments and chondromalacia (inflammation of cartilage) underneath one of his kneecaps. Pain didn’t seem to be an issue for the experienced defender, but the constant swelling quickly became an issue. Underneath the skin, a combination of bone and cartilage grinding, as well as fluid buildup, left Rusin’s knee nearly immobile as training sessions and games came and went. The former Orlando City SC defender did whatever he could to avoid the impossible task of surgery; repeated drainage, shutting himself in to focus on stretching, icing, compression, massage, and more. Despite exhaustive efforts, surgery to tend to his damaged knee became Rusin’s sole option after making just seven regular season appearances.

Surgery is just one half of the battle. Though both players were on the mend after their procedures, the rigorous rehabilitation, along with the physical and mental challenges associated with the long process, awaited them.

While some players traveled around and explored new avenues in their offseason, Braun continued to put months of work into his recovery. Days spent stretching, running, lifting light weights, balancing, and more occupied the Salt Lake City native’s offseason schedule. But with the NASL and Indy Eleven’s future unclear after the 2017 season closed, the mental and emotional taxation began to take its toll.

“This was definitely the longest and hardest offseason I’ve had since I’ve been playing,” Braun claimed. “I spent a lot of hours doing therapy, making sure I would come back as strong as possible. I tried my best not to think about the uncertainty of the league and my team. My main focus was getting back to full strength so I would be ready for preseason.”

Rusin’s physical experience didn’t differ much during his time in Miami. Countless hours were spent working on mobility with weights, swimming, running, and several of the same treatments Braun endured. Trainers gleamed an optimistic light early on with claims that Rusin could possibly see playing time before the end of the 2016 season. That excitement faded as Rusin continued to experience pain while performing day-to-day tasks. But Rusin didn’t waver.

“Mentally, the hardest part was being in the present and accomplishing the tasks at hand,” Rusin said. “Taking small steps every day and knowing that these steps will get me to where I needed to be. For me, the most important aspect of returning from an injury is keeping a positive attitude. Again, enjoying the process.”

Fast forward to today. After not hours or days, but months of persistence and a positive attitude, Braun returned to playing the “Beautiful Game”. On April 7, 2018, Braun made his first appearance in Indy’s starting XI against North Carolina FC, where he collected his first assist during his 65 minutes on the pitch. It’s a good sign, but Braun is still taking his recovery day by day.

“Getting my first start last week was a big accomplishment for me,” Braun said. “I worked really hard to get back to the point where I’m capable of starting a game. I can’t say exactly when I’ll feel like I’m back 100 percent, but I’m doing everything I can each week to get there as fast as possible.”

Though his moment was short lived, Rusin also made his come back to the game in his first Indy Eleven appearance as an 89th minute substitute in the same North Carolina FC match. A huge milestone by all definitions of the word after having not seen any regular season play in over a year. An emotional, but exciting return to the sport Rusin has played since his youth.

“There were ups and downs, but I never quit. I had the right people around me to push me and motivate me when I needed it most. I couldn’t have done it without those closest to me and those who put in their own time to make sure I was back.”

Both of these players could’ve thrown in the towel and walked away from their careers during this process. The fact that they didn’t is a testament to the commitment that both Braun and Rusin have to their club and the sport they’ve devoted their lives to. Dedication, that is sure to be demonstrated as each player begins applying their continued hard work during their minutes on the pitch this season.