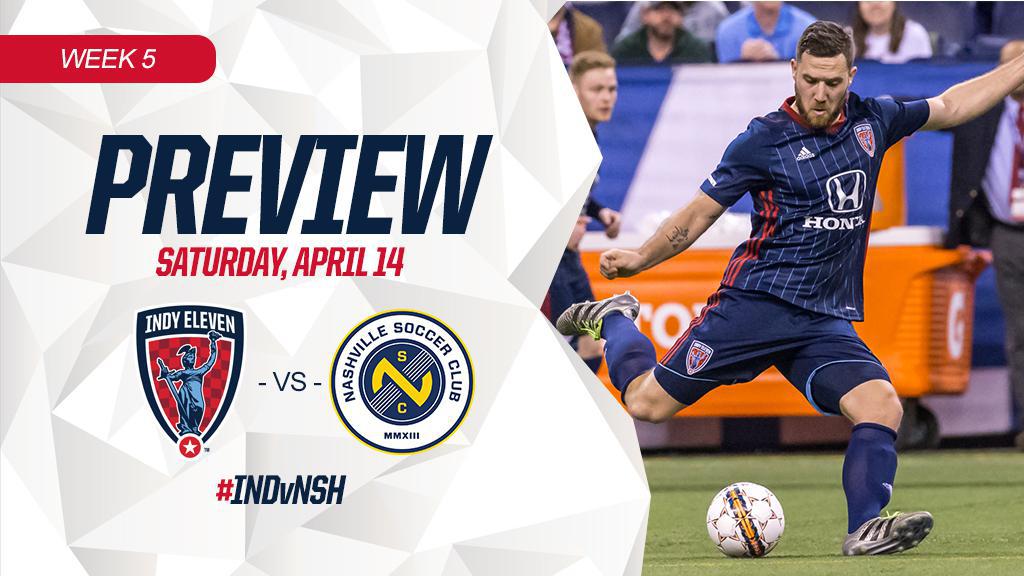 Indy Eleven look to capture their first three points at home against the traveling Nashville SC. Sitting at seventh in the table, “Indiana’s Team” will be attempting to hand fifth-placed Nashville their second loss of the season. The “Boys in Blue” seek redemption at home after falling 0-1 at the hands of FC Cincinnati in the home opener.

Despite the struggles in Game One at home, “Indiana’s Team” has played superbly on the road bringing three more points back to Indianapolis last week after defeating North Carolina FC 1-0. Team of the Week Award recipient Tyler Pasher converted the only goal of the game in the 15th minute. Justin Braun, who made his first start of the season against NCFC, played Pasher through on a long ground pass. Pasher took a precise first touch into the NCFC box and calmly placed the ball into the bottom right corner of the net. The match nearly ended in a draw after Indy Eleven conceded a penalty in the 91st minute, but a save by Welshman Owain Fon Williams in the 93rd minute denied Kyle Bekker’s potentially equalizing penalty and secured three points.

Nashville SC accomplished in Week Four what Indy Eleven attempts to complete in Week Five after recording their first home victory of the season defeating Charlotte Independence 2-0. Goals from newly-signed forward Alan Winn and substitute Ropapa Mensah respectively sealed the victory for the home team. The victory improves Nashville’s record to 2-1-1 on the season thus far. Defense has been the staple through the last four games. Nashville’s backline has totaled three clean sheets and has conceded two goals in four games.

Indy Eleven look to their home supporters to power the “Boys in Blue” to their first home victory at Lucas Oil Stadium and aim to spoil Matt Pickens current run of three clean sheets in the last three games.

“It’s been something we’ve been focusing on all week and working hard towards that,” said Indy Eleven head coach Martin Rennie. “We just want to get on a run of winning. We’ve already got a couple wins on the road, so now we want to make sure we do well and focus on getting a win at home.”

Ayoze made a good first impression in his long anticipated debut against North Carolina FC. The defender was a staple in the backline with four successful tackles, three interceptions, and two clearances. He also showcased his ability to move the ball around the pitch completing three-fourths of his passes during the game. Look for Ayoze to continue to perform well in the back line and frustrate Nashville forwards Alan Winn and Michael Cox Saturday at home. The Puerto de la Cruz native, who spent time in La Liga with Tenerife and Sporting Gijon, played the past five seasons with New York Cosmos leading the team to much success in the NASL from the back. Ayoze appeared in 119 regular season matches and logged over 10,000 minutes with the Cosmos. The Spaniard scored eight goals and assisted on 14 more for the Empire State club.

Nashville holding midfielder Boluwatife Akinyode is in his first season with the team. Despite the new surroundings, he’s grown very comfortable on the pitch with his new teammates through the first four games. Akinyode has moved the ball around the pitch with no problem completing on average nine out of every ten passes he plays, and is just as efficient in the opposition’s half. The Nigerian also makes his defensive presence felt during matches winning three-fourths of tackles on average per game.

His good form continued last game against Charlotte. He worked the ball from left to right completing four-fifths of passes played in the Independence half, and finished the game with 86 percent passing accuracy. The former Seton Hall Pirate also annoyed the Independence attack accumulating four tackles and winning over half of his 50-50 challenges. Look for the Nigerian International to try and discombobulate Indy’s midfield as the “Boys in Blue” seek their first home win.

Fon Williams’ experience showed in a Week Four victory on the road at North Carolina FC. The man between the posts came up big making three important saves and most importantly a penalty save in the 93rd minute that rescued three points. As a result, the Welshman currently stands as the frontrunner for USL’s Week Four Save of the Week. The Nashville attack hasn’t been extremely productive producing just three goals on 38 shots in the USL thus far, but the speedy footwork of Alan Winn may lead to the young forward finding the back of the net again.

Alan Winn’s footwork and goal in Week Four led him to be named to Team of the Week. The slick forward used his right back heel to cut across a pressing Charlotte defender and then curled a beautifully placed left-footed shot into the left corner of the net scoring the game’s first goal. Scoring goals is what the Texas native has based his game on. Winn found the back of the net 33 times in 62 starts with the North Carolina Tar Heels. The playmaker also registered 14 assists during his collegiate career in North Carolina.

Winn will most likely win Goal of the Week in Week Four. He currently sits atop the polls with 44 percent. Fon Williams is likely take home Save of the Week in Week Four. He sits in first with 33 percent of the votes. The question we wait to find out the most pressing answer to is which player will help their team seal three points as the “Boys in Blue” look to win their first game at home and hand the Music City visitors their second loss of the season.

Things will be nice and dry in the closed-roof Lucas Oil Stadium. Click here to grab your tickets to the 12:00 p.m. kickoff.