KEYS TO THE MATCH: INDvNSH 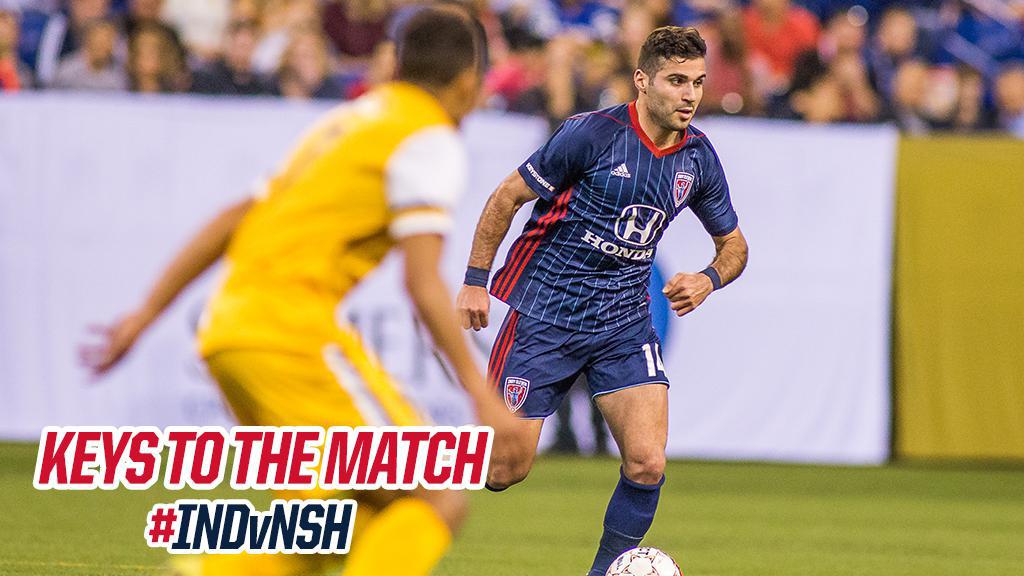 After every game in 2018, IndyEleven.com’s Drew Kamaski will give his three takeaways from the performance of the “Boys in Blue.” This week's edition comes after "Indiana's Team" registered another three points on the road against North Carolina FC.

No, it wasn’t Liverpool FC legend Steven Gerrard belting a 35-yard free kick into the bottom corner of the net. It was Indy Eleven forward Soony Saad. The ball was played a few yards in front of him by striking partner Jack McInerney, waiting to be struck, and what a hit it was. The powerful strike swerved left and then back to the right leaving Nashville SC goalkeeper Matt Pickens stranded as the ball nestled in the bottom left corner.

“As soon as I hit it I kind of knew I struck it well,” said Saad, the former Sporting Kansas City player in his first year with Indy Eleven. “What I wanted to get most importantly on that ball was the swerve.”

The finish was Saad’s second of the afternoon, and his first brace as an Indy Eleven player. The Forward’s first goal came in the 15th minute after Indy Eleven defender Ayoze Garcia Perez played a long ball over Nashville’s backline. Saad outran the pursuing Nashville center back and tucked a shot past Pickens.

Saad’s free kick landed him a spot in the Top Five of SportsCenter’s Top Ten on Saturday. Furthermore, Saad’s world-class goals secured his title as USL’s Player of the Week in Week 5 of the 2018 season. His pair of goals also makes him Indy Eleven’s leading goal scorer thus far this season, with teammates McInerney and Tyler Pasher also having found the back of the net.

On top of Indy Eleven enjoying several jacks of all trades in the squad, is the extreme depth found in the clubhouse. Defender Brad Rusin stepped in for the suspended Karl Ouimette at center back and helped lead the back line. Ring’s ability to play right back covers the absence of defender Reiner Ferreira. It may be from Week Four, but it is worth noting Justin Braun stepped in for the suspended forward Jack McInerney in North Carolina and assisted in the only goal of the game.

“It’s the first time I’ve been on a team where I feel like every single player in the squad deserves to start every week,” said Indy Eleven Captain Matt Watson. “The work rate and the standard of players we have here is unbelievable.”

Indy Eleven elegantly showcased their creativeness against Nashville. The free kick goal is the obvious example. According to Saad, McInerney and he came up with the idea for the set piece on the training ground. Team innovation is even more evident in Saad’s first goal. Ayoze, who recorded his first assist of the season last Saturday, noticed McInerney’s run shifted the Nashville defense and played a precise long ball from the top of his own 18-yard box hitting Saad in stride with a clean finish. If a Center Back recording an 80-yard assist isn’t creative, then nothing is.

This is Rennie’s first season with Indy Eleven and the first season in “Nap Town” for many of his players as well. Brad Ring is the last member of the inaugural team. Ring, Ben Speas, Justin Braun, and Zach Steinberger were the only players who had previously dressed in Indy Eleven colors prior to the start of the season. Everyone else was signed in the offseason. Despite several unfamiliar faces, Rennie has found a way to blend the team together and has the squad playing fluidly as shown in Saturday’s first home victory of the season.

“We’ve had quite a few players that haven’t been available for different reasons and that was the case again against Nashville,” said Rennie, who has been coaching for 11 years. “When we built the squad we knew would need a lot of good players and that’s been the case already.”

Rennie’s ability to craft players into different roles has resulted in a deep, strong squad that can play several formations. The Scotsman’s tactical mindset has led to adjustments off the field and in-game, leading Indy Eleven to its best start in club history after defeating Nashville SC. The former Major League Soccer gaffer has the “Boys in Blue” sitting at fourth in the table and three points off Eastern Conference League leaders and defending USL champions Louisville City FC. Most importantly, he has the confidence and backing of his players that are still striving reaching their peak performance level.