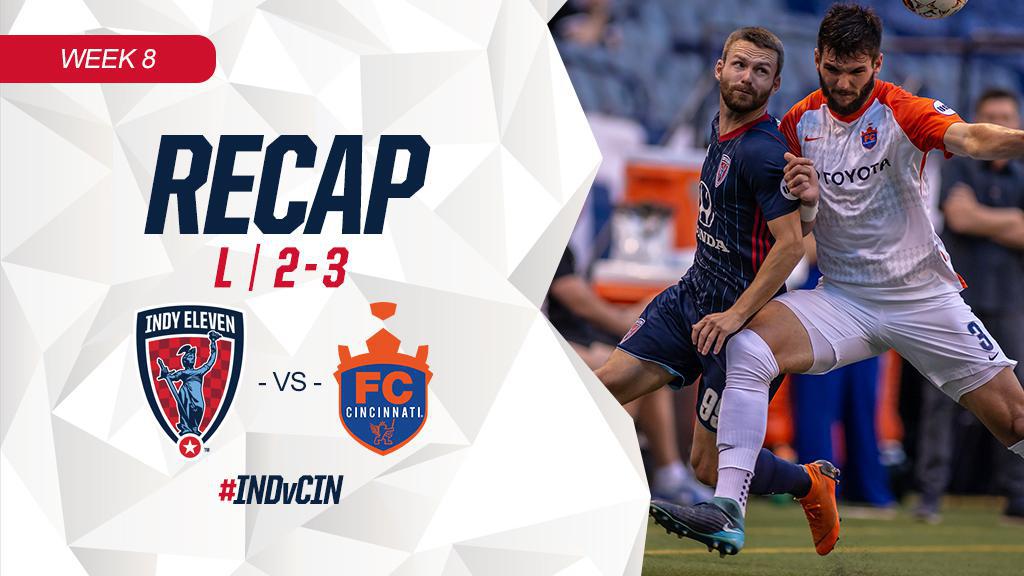 A tough night in the Circle City as Indy Eleven fall 2-3 to FC Cincinnati at home for the second time in 2018. This marks the second time the “Boys in Blue” have dropped points this season, and the first time the team has conceded more than one goal in a match.

The evening started with Indy trailing in the opening minutes. FC Cincinnati frontman Emery Welshman went down in front of Indy's goal in the 5th minute after charging into the box. It was contact with “Boys in Blue” defender Carlyle Mitchell that led Welshman to go down gripping his head leading the official to award the visitors a penalty kick. Two minutes passed before FCC captain Kenney Walker stepped to the spot and buried the ball into the bottom left corner of the goal off his right foot. FC Cincinnati 1, Indy Eleven 0.

Both sides continued to ask questions of each other. Indy Eleven forward Soony Saad got his first good look at goal in the 15th minute from a direct free kick a little over 30 yards out from the “Orange and Blue's” goal, but the ball skidded just missed to the right of the post. Indy would find, and capitalize, on their game-leveling chance 11 minutes later. A pop ball outside of FCC's 18-yard box fell to feet of Walker, but a bad first touch saw the ball deflect to the path of Indy Eleven forward Jack McInerney. A short dash and a shot from McInerney was deflected out of goal by Cincinnati goaltender Spencer Richey. Lacking power, the ball landed back at the feet of “Jack Mac” before he sent it into the back of the net for Indy's first goal of the evening.

The goal count continued to climb for Indy. A myriad of attempts from the “Boys in Blue” in the 29th minute forced Cincinnati into a defensive corner before Saad was eventually brought down in front of goal. The official blew his whistle and pointed to the penalty spot once more. This time, Ayoze stepped up and registered his first Indy Eleven goal with a shot in the lower left corner. The good guys were in the lead.

Cincinnati weren't going down without a fight as they leveled the score once more in the dying minutes of the first half. In the 41st minute, FCC midfielder Corben Bone chipped the ball high over Indy's defensive line deep in the home sides own half. The ball took a single bounce in front of FCC midfielder Jimmy McLaughlin before he shot the ball from outside the box and sent it into the bottom left corner of Indy's box. The score was tied as the first half came to a close.

The second half started strong as both sides looked for their chance to take the lead. In the 54th minute, FC Cincinnati's latest signing, midfielder Michael Lahoud hit a short pass forward to Bone at the top of the box. Bone hit the ball from the top of Indy's 18-yard box after a controlled first touch and found the back of the net. Indy Eleven continued to look for chances throughout the second half, FC Cincinnati was back in the lead where they would remain for the rest of the evening.

“It's always disappointing to lose," said Indy Eleven head coach Martine Rennie. "I think it's a little bit frustrating that we lost goals at the start of each half. It was certainly an exciting game for the fans. From a coaching perspective, I would expect that it'll be an improved performance when we come back to it on Saturday.”

Indy Eleven will finish their three game stretch this Saturday at 12:00 p.m as defending USL champions Louisville City FC travel to Indianapolis. Fans cans grab tickets to the early afternoon match for as low as $15 at www.IndyElevenTix.com or by calling (317)685-1100.