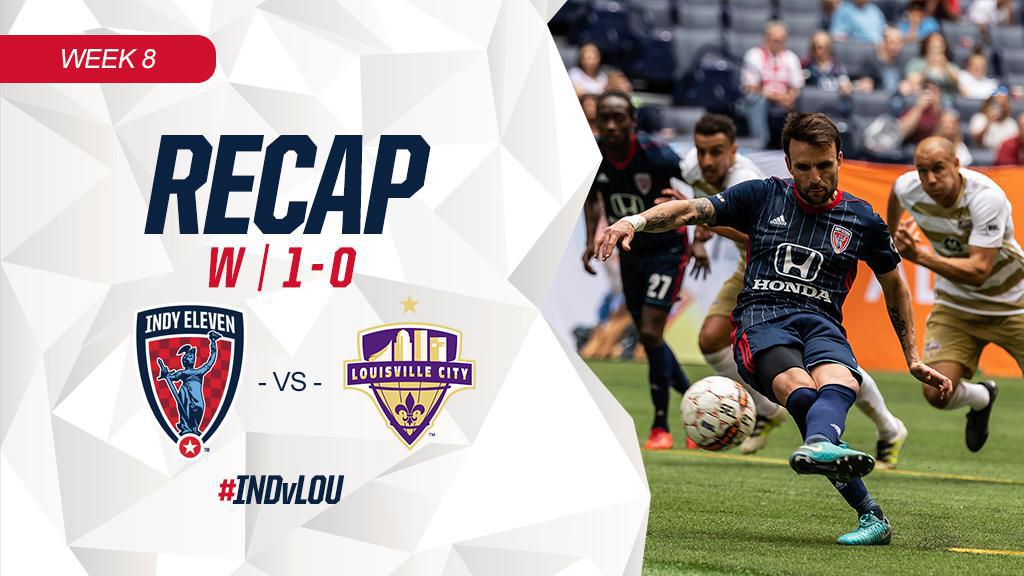 The action in the first 45 minutes of play was primarily contained in the midfield as both sides fought for scoring opportunities. Louisville had the first run at goal in the 14th minute when midfielder George Davis IV fired a shot high over Indy's goal from the right edge of the field. Indy Eleven midfielder Nathan Lewis retuned the favor six minutes later with his run into LCFC's 18-yard box. Louisville defender Paco Craig did well to clear seconds before the Trinidadian international was able to get a solid shot off. “Indiana's Team” had another close look at goal in the 34th minute when midfielder Zach Steinberger lifted a cross into the center of LCFC's box to forward Soony Saad's head before his attempt ended up over the cross bar.

The match continued on to the next 45 minutes.

Indy would come close to scoring once more six minutes into the start of the second half. Saad sent the ball to the top of LCFC's box from the corner to meet the head of striking partner Jack McInerney. The former LA Galaxy frontman nodded the ball towards goal, only for it to fly just over the frame. The “Boys in Purple” retaliated in the 58th minute when midfielder Brian Ownby hammered a ball from the upper left of Indy's 18-yard box on target. Thankfully, “Boys in Blue” goalkeeper Owain Fon Williams stopped the shot as he dove to the ground, quickly collecting and restarting play seconds later.

The dicey play continued on until the 78th minute when LCFC's Craig was given a yellow card for a handball within their own box, awarding Indy Eleven a penalty kick for the offense. Eleven defender Ayoze Garcia stepped to the spot and buried the game-winning goal into the upper left corner of the net. Indy would retain this lead for the remainder of the match.

Although Indy would walk away victorious, Louisville would have two more close chances at goal in a seven minute window. In the 80th minute, LCFC's Sean Totsch nearly nodded in a header from the center of Indy's box after receiving a cross from teammate Paolo DelPiccolo, but the ball was tipped over the bar by Fon Williams. Seven minutes later, LCFC's Ownby took his chance with another close-range header that was eventually cleared out of danger by Indy defender Carlyle Mitchell, midfielder Matt Watson and Ayoze.

The match carried on through eight minutes of stoppage time, but that wouldn't be enough for the I-65 visitors to find the equalizing goal. Indy Eleven tallied three points on the afternoon, securing four-of-nine points from the three games in the last seven days. The “Boys in Blue” move into third place in the USL's Eastern Conference standings, but much remains to be seen as the remaining Week 8 fixtures wait to be played out.

Indy Eleven will return to action on the road Saturday, May 11 at 7:00 p.m. against Pittsburgh Riverhounds SC. “Indiana's Team” will return to Lucas Oil Stadium on Saturday, May 19 at 8:00 p.m. to take on Bethlehem Steel FC. You can get tickets for as low as $15 at www.IndyElevenTickets.com or by calling (317)685-1100.